by Jason Guerrasio
in Directing, Directors, Filmmaking, Interviews
on May 21, 2008

Turkish-German filmmaker Fatih Akin’s The Edge of Heaven is a fierce, generous melodrama of boundaries and passions, of blood and yearning, the second of a trilogy about émigré culture patterned after Fassbinder’s “BRD Trilogy” (The Marriage of Maria Braun, Lola, Veronika Voss) of post World War II German history. His fiery prior feature, Head-On, is the “love” component, with Edge comprising “death” (with “evil” on the way). Comparisons can be drawn to other work by the late German director, especially with his inclusion of Fassbinder stalwart Hanna Schygulla in a major, moving role. Akin seems to have found his métier after working in several styles, from the Scorseseian buddy film A Short, Sharp Shock(1998) to the giddy, sweethearted road romance Im Juli (2000) to his documentary on Turkish music, Crossing the Bridge: The Sound of Istanbul (2005). Crossing the Bridge came after Head-On (2004), Akin’s best-known film, a devastating, sexually perfervid cross-cultural romance.

The dovetailing storylines begin with a retired widower who meets Yeter (Nursel Kose) a prostitute whom he offers to pay to live with him. His son Nejat (Baki Davrak), a college professor, disapproves, but becomes close to her until her accidental death, which leads him to Istanbul in search of Yeter’s missing daughter, Ayten (Nurgul Yesilçay). While taking over a German bookstore as its owner returns to Germany, Nejat is unaware Ayten, a political activist, is in Germany where she meets a university student (Patrycia Ziolkowska), who admires her politics and brings her to bed in the house of her mother (Schygulla). The journeys between Germany and Turkey are marked by more than just the crossing of borders. Unexpected intersections lead to tragic, but ultimately hopeful results,

Scholar of German film, Thomas Elsaesser’s valuable essay in the May Film Comment holds this trenchant observation: “Not for Akin the Romeo and Juliet melodramas of multicultural star-crossed lovers or the comedies of mistaken ethnic or national stereotypes found in the ‘Greek wedding’ genre. In both cases, the hyphenation of ethnic or religious identities joins too comfortably or separates too neatly what in reality remain messy sets of generational tensions, universal moral dilemmas, emotional ambivalences, and divided loyalties. Instead, Akin prefers, like Fassbinder, perversely improbable love stories, sadistic scapegoating, and suicidal sacrifices.”

The Edge of Heaven won best screenplay at Cannes 2007, as well as at the European Film Awards. It didn’t make the cut for Foreign Language Oscar consideration, but in March, won five Lolas from the German Film Awards.

The Edge of Heaven is unabashedly emotional and patterned around recurring structures and recurring themes and its deep well of sorrow as well as Akin’s superbly expressive filmmaking—framing and cutting and a generous eye for the features of city streets and besorrowed faces—demonstrates bold use of craft. The Edge of Heaven is currently playing in Manhattan and Strand Releasing will release wider in coming months. 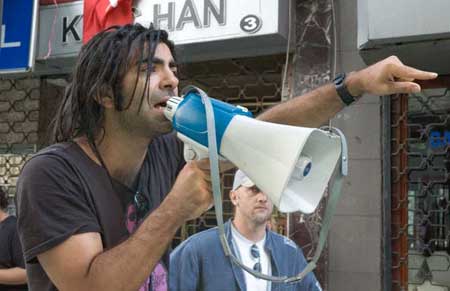 FILMMAKER: While you were making Crossing the Bridge, did any of the musicians you met in Istanbul influence this film?

AKIN: Yes, some of them did. If you remember in Crossing the Bridge, there was this Kurdish performer in the film, Aynur. The year we shot the film, 2004, Turkey had never been so liberated. I met all these beautiful musicians and a year later, in 2005, I spoke to Aynur and she said they had forbidden her album — it could not get through the censorship anymore. I was really shocked, and so I had a desire to have a hero who has certain issues to face, who has a political background, a political resistance background. And then were some stories the street musicians from Crossing the Bridge had told me. Some of the members told me about their ethnic background and about experiences they had. I had a feeling to use this in Edge of Heaven.

FILMMAKER: Exchanges of populations and culture between cities in that region, such as between Thessaloniki and Istanbul, have occurred so often. Do have a sense of Istanbul’s past as this major cosmopolitan crossroads at the turn of the twentieth century?

AKIN: You still feel the sort of facts of that beautiful past but it’s not a multicultural presence anymore. It has this multicultural past and you see this past through the buildings and through the architecture and you hear it in the music and [see it in] some faces. But now it has this, I dunno, this present where this multicultural past has disappeared. The more time spans, the more it disappears. That’s a pity, a shame. That’s something that’s missing. I don’t want to come to the town and have this multicultural nostalgia; I want to have it presently. I have this in Germany these days, more. Because Germany is a bit like the U.S. I was in a kindergarten with Yugoslavian kids, with Greek kids, with German, with Turkish, with English. You see very much more multicultural and I always remember this as a gift. In Istanbul, it’s just the past.

FILMMAKER: Has The Edge of Heaven been released there? How was it received?

AKIN: Yes. It made box-office, which means people liked the film, whoever saw the film sent other people to the film. The reviews were kind of mixed. They weren’t enthusiastic like in Europe or for my film before, Head On. The critics were more enthusiastic. I expected that because the film is not taking any party, the film is kind of very neutral. I made the film that I hoped no political extreme can instrumentalize the film for itself. It’s a cold portrayal of the left movement and a cold portrayal of the right movement. I think that’s the secret of why the response of the critics was kind of cold. But at the domestic film festival of Antalya [the Antalya Golden Orange Film Festival], the film won five awards, including best director and second best film. So, in a way it was warmly received. I’m satisfied with it.

FILMMAKER: There are critics who seem to need to be reassured, they don’t seem happy with a movie unless it endorses or underlines their perspective on politics or the world, something they already believe. We call it “preaching to the choir” — reinforcing what they already know. Ambiguity and ambivalence are discouraged. You do attempt this larger complexity with all these issues about identity and borders and desire.

AKIN: Since I am also a documentary filmmaker I recognize the idea of observing. You see? To not push or force my audience to think in a certain direction. When I see films where the film is really trying to teach me something in a didactic way, trying to force me to think in a certain direction, I don’t feel so comfortable. I think I’ve read enough books and I had a good education, y’know? I don’t need that, that’s not what I want to see. When I made this film, every film I do, I am the first audience, you know? I try to make it like I wouldn’t feel; I don’t want to have propaganda. I don’t want to see that. It’s a non-political film. My definition of a political film is when you force an audience to accept certain [things]. What you describe is the same in Turkey. If I get criticism in Turkey, it’s why don’t I take a clear position? For this film, the issues are too complex. I want to show that in a way everything has two sides. It’s a very philosophical film, in a way, and it [demands an] interactivity [with] the audience. The critics you mention, I think this is for people who are lazy to think by their own.

FILMMAKER: The man who made The Lives of Others, Florian Henckel von Donnersmarck, told me about how much he admires the director Robert Zemeckis, whose movies’ politics often elude reviewers. His films become mirrors for their own politics. An entertainment with moral concerns but you couldn’t decipher what he believes.

AKIN: Yeah. Somehow I share that. I get a lot of inspiration through the cinema, the New Hollywood Cinema, the cinema of the late ’60s ’til the end of the ’70s. I think that period was the best American cinema. And you have heritages of that today in American movies like Syriana and Good Night, and Good Luck. These were political films, in a way, they deal with political issues but especially Syriana, I like the observing of things and not commenting. The filmmaker gives the audience a kind of space to think. This is what I wish of cinema. I don’t like films that answer every question. With apolitical statement—I don’t know if you know the cinema of Yilmaz Guney, a very popular Turkish director? After a while, he was forcing the audience to be left, and you don’t feel very comfortable [watching his films]. First a film has to entertain. First rank, a film must be storytelling. Whatever your message is, whatever your ideas are, whatever your thoughts as an artist are, you can smuggle them or put them into the film so that the audience can understand them on their own.

FILMMAKER: You saw from Guney’s a contrary example how to avoid didacticism?

AKIN: Yes. I like the cinema of Guney because it’s so strong, it has a strong identity, and he really believed in what he did, and he found some great images, but I am adult enough to decide. If a film forces you, sooner or later, it reminds me of Goebbels, of how Goebbels treated cinema. You have films like Top Gun or Black Hawk Down, which are forcing to audience in another direction, to being Right. I don’t think this is very healthy for an audience. I think film is an artwork, and art is something you have to interact with your audience. This I really believe.