by Jason Guerrasio
in Directing, Directors, Festivals & Events, Filmmaking, Interviews
on May 15, 2007

It’s a rainy mid-day in late August — the wetness welcome, following an intolerably hot week, even by New York City summer standards. At night during that unpleasant spell the postmodern auteur Wong Kar-wai — the master of lush visuals and unpredictable soundtracks, the absolute perfectionist concerned with memory, loss, loneliness, and the subjectivity of time — had been shooting scenes downtown on the West Side of Manhattan, on SoHo’s funky Grand Street, for My Blueberry Nights, his first movie in English and the out-of-competition opening night presentation at this year’s Cannes Film Festival (The Weinstein Company will release the film in the U.S. later this year). Now, one day before he is scheduled to return to Hong Kong, he and I are at the Upper East Side’s luxe Shun Lee Chinese restaurant. He looks exhausted, so drained of energy that he can’t bother donning his trademark metal-rimmed shades. We are here to talk about William Chang, his longtime friend, production designer, editor, and overall visual muse for another story, but I see a golden opportunity and skew the post-dessert interview toward the overall project itself. Not too many questions, since the gifted director is politely pretending to be 100% alert. 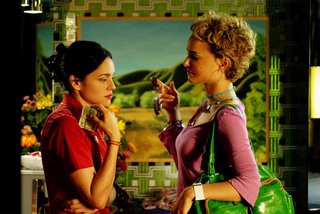 I had spent a few nights during that torrid period on set, sitting with Chang at a monitor facing the glass-fronted café owned by Jude Law’s character, who is on the verge of falling in love with that of singer-turned-movie star Norah Jones’. In the course of the movie, a lost Jones travels across the States trying to find herself and to sort out her relationship with Law. She goes to Memphis, where she works as a waitress and observes a distressed cuckolded cop played by David Strathairn and his restless, much younger wife portrayed by Rachel Weisz. She also travels to Nevada, where she befriends Natalie Portman’s gambler [pictured above] before heading back to New York and an unresolved love affair.

For those looking for continuity between My Blueberry Nights and his Chinese films, Wong makes a revealing comment while we still have chopsticks in hand: “David reminds me of Tony Leung.” An alter ego lives on.

Filmmaker: It’s funny, you’ve been shooting for a few weeks, you are going back to Hong Kong tomorrow, you seemed so tired during lunch, but you’re so on right now — like an actor when the camera is rolling.

Filmmaker: No, it’s true. So, do you feel good about the project?

Filmmaker: Is that how you felt when you made Happy Together outside China/Hong Kong, in Argentina?

Wong: Maybe. I like Happy Together very much. It has very good energy. Like My Blueberry Nights, it’s a road movie.

Filmmaker: You’ve mostly worked with Christopher Doyle as your cinematographer. You have a different one for My Blueberry Nights.

Wong: Yes, Darius Khondji. I worked with him before on some commercials.

Filmmaker: Do you tell him what to do?

Wong: No. I don’t like people to follow my way. He has his own way of seeing things.

Filmmaker: Does William Chang work closely with your DP?

Wong: William is strong. When he designs a set he is already designing the lights. For a DP it’s a gift. They don’t have to figure out how to light it, because William has already lit it for them.

Filmmaker: Let me ask you about the actors, especially Norah Jones. Some musicians are good on stage but don’t fare very well in films. For example, you didn’t cast Madonna.

Wong: But I will!

Filmmaker: Seriously, you had a hunch with Norah. Can you say something about why you thought she would work?

Wong: She has a very interesting face and a very interesting personality. She has so many variations. Sometimes she can be very classical. It really changes. Like when we were shooting in Memphis, she becomes very classical. And in the New York scenes she’s very modern. In the Nevada scenes, she goes her own way, on the road. Norah doesn’t care about how she looks. She’s really down-to-earth. And she has a very strong personality.

Filmmaker: When I read the Memphis part of the script, her character was more of an observer.

Wong: That was only the first draft.

Filmmaker: I got the feeling that in much of the film, it’s not about her: It’s about her watching others.

Wong: In the first part, she’s more like the only person for the audience to identify with. After each of the scenes, she goes back to her room and starts writing her letters.

Filmmaker: What about Jude Law?

Wong: Jude Law is a very talented actor. It’s surprising that his tempo is so good. He has very good rhythm. An actor’s rhythm is something very important because he can deliver lines in a certain way. I’m surprised, because basically his character, Jeremy, when you look at the script he’s a very melancholy guy, more like Telly Wong [the New York-based screenwriter]. But I wanted him to be very active and in a way a very bright and — it’s not comic — a very bright character compared to the character that’s been written in the script. And so I kept asking him to walk busy, talk loud, and then he picked it up and really gave a new Jeremy, and everybody liked it.

Filmmaker: How many takes are you averaging here?

Wong: Depends. Sometimes it’s two or three, sometimes it can be 10 or 15. The thing is, when you are shooting difficult parts like for Norah, most of the time you have to proceed with a long take from the top. Because she is not used to, “You have to pick up from this line and stand on this mark to speak this line and do this reaction.” It’s very hard for her because she has never made a film before. It’s much easier to have her do everything from the top to the end. So once you have a set-up, like you do this take, this point, and this reaction, you will take more time.

RACHEL WEISZ IN MY BLUEBERRY NIGHTS. PHOTO COURTESY OF THE WEINSTEIN COMPANY/MACALL POLAY.

Filmmaker: What about Rachel Weisz? Did she deliver what you wanted? Is she Blanche DuBois in the Memphis scenes, or is she someone else?

Wong: We changed it. It’s not Blanche, it’s more like Lolita. Rachel is great. I explained to her what I wanted, and she started writing. She wrote something which is very nice and I used it in the film.

Filmmaker: But her character is kind of a trashy, flamboyant working-class woman.

Wong: She’s like Lolita. I just explained it to her. She asked about some line. I told her the whole point for the love scenes is not for you to explain what happened to your marriage. The point is that you used to like each other, but now it’s over and he doesn’t want to let go and you want to move on — that is the point. You can’t say, “Well, we are madly in love and we make love all night,” because it’s David Strathairn and you, and you don’t feel that. It’s possible if they were younger. So for my mind, I think, Well, when you met David, he’s like a thirtysomething cop and you are 17, like a Lolita. And this guy is just crazy about you, and you are rebellious, so you have a problem with that. So you become a scandal in the town. And then you always want to move out and you try, but it doesn’t work, so you come back. And he marries you. That’s the beginning of this marriage.

Filmmaker: The last scene in Memphis or for her?

Filmmaker: Can you tell me a bit about Natalie Portman?

Wong: She’s very generous. And she’s very, very strong. And first of all, she never behaved like a star. Actually, she’s very caring and very generous. Because most of the scenes are with Natalie and Norah. And Norah needs to warm up. Natalie is so supportive, and her performance is great.

Filmmaker: I don’t know really anything about the kind of person her character is.

Wong: She’s a gambler. Her father is a famous professional big-time gambler. She’s a rebel, more like a spoiled child. At the end it’s about the reconciliation with her father.