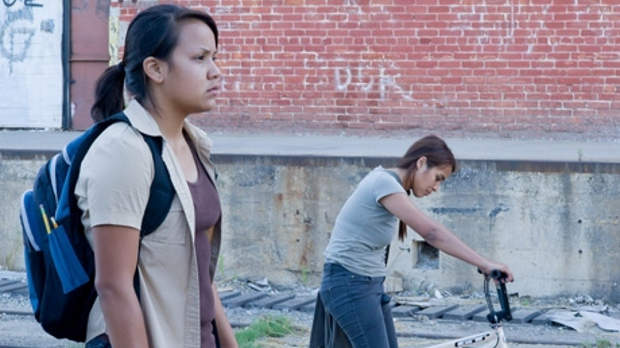 by Lauren Wissot
in Directing, Directors, Filmmaking, Interviews
on Aug 1, 2012

Though Aurora Guerrero made Filmmaker magazine’s “25 New Faces of Independent Film” list in 2006, the director behind this year’s Sundance-premiering, award-winning Mosquita y Mari – which most recently took both Outstanding First U.S. Dramatic Feature Film, as well as Outstanding Actress in a U.S. Dramatic Feature Film for its lead Fenessa Pineda, at Outfest – was a welcome new face to me when I caught the film earlier this year. A tale of two Chicanas coming of age in working-class L.A., Guerrero’s feature debut is breathtaking in its understatement, less your typical “queer flick” than a continuation of the type of patient, immigrant-informed cinema practiced by filmmakers like Ramin Bahrani and Rashaad Ernesto Green. Fresh off her Outfest win, Guerrero spoke with Filmmaker about the long road to the big screen, being boxed in, and what’s changed for her in the past six years.

Filmmaker: Interestingly, you’ve been on the indie industry’s radar for at least a decade – you worked with Patricia Cardoso on 2002’s Real Women Have Curves – so I’m a bit surprised Mosquita y Mari is your feature debut. Did you choose to work on other projects – including your award-winning shorts – or was it a matter of difficulty in finding financing for a feature-length film?

Guerrero: It was a combination of the two. I learn best by doing, so making shorts and assisting directors on their films were definitely ways for me to learn about the craft of writing and directing films, and also how to collaborate with others. I would say that it took us four solid years to find the financing, which ultimately came at the hands of Kickstarter. Prior to our successful Kickstarter campaign, we definitely struggled to find financing. It really didn’t help us any to go out for funding when the economy was at its lowest in decades. No one was paying any attention to me or to this low budget, no-name-actor film. My producer, Chad Burris, and I were worried but we always had this feeling that this film would get made somehow.

Filmmaker: Could you talk a bit about how the film originated and developed? It seems like an indie, coming-of-age story focused on two Latina teens might be a hard sell.

Guerrero: The story of Mosquita y Mari was largely crafted around my own coming of age. While in film school, I was given an exercise to “write what I know” in whatever form it came. So like a mad woman I started writing a series of short stories about these two girls growing up together and how everything they did was fueled by an unspoken attraction. It took me a few days to realize that I was really writing about my own experiences, particularly one friendship I had during my youth. It was probably then that I got very emotional about the process. I was finally talking about the first time in my life when I was feeling complex feelings for someone – someone who happened to be of the same sex. What followed was more purging and purging – so much so that I had an episodic story on my hands with multiple storylines and themes. It was kind of a mess. But despite the “mess” I knew that I had a story in there that would make for an interesting first feature. That’s when I was introduced to Jim McKay. He came on board as my screenwriting mentor. Over the next few years, between juggling jobs, I spent time peeling away the layers that ultimately left me with the film that is Mosquita y Mari today – a subtle story of friendship, love and survival. Filmmaker: In addition to the lingering cinematography, one of the aspects of the film that most excited me was its very real portrayal of sexual ambiguity – so I’m hoping you could discuss the script a bit. I know you’ve played the LGBT fests, yet the characters of Yolanda and Mari are never written into a box. One could just as easily see both characters growing up to be straight-identified chicks.

Guerrero: I don’t know if I would call them sexually ambiguous. If they lived in a world void of hetero-normative culture and homophobia maybe this movie would be totally different. They’d probably be calling each other girlfriends right off the bat. But that’s not their world. Instead they find themselves in these silences. Wondering if it’s okay to say anything or touch each other. Wondering how the other really feels, but too afraid to push it. And on top of that, at 15 I think you don’t exactly know what’s happening because it’s really the first time you’re feeling those kinds of emotions. And you sure as hell aren’t eager to call yourself queer! Their love is complicated by all these layers, and that’s what I wanted to capture as genuinely as possible.

Filmmaker: Speaking of boxes, I told your producer Chad Burris that it amuses me to see the film selected as the opening night flick of the Native Cinema Showcase during Indian Market in Santa Fe in August. Neither Mosquita y Mari – nor Chris Eyre’s latest Hide Away, for that matter, which is also playing – has anything to do with Native subjects. I’m guessing it’s mostly Chad’s and Chris’s bloodlines that qualify the films. How do you feel about your work being categorized, either with regards to ethnicity or gender/sexuality? (I personally see Mosquita y Mari as more about immigrant culture and how it shapes identity – similar in spirit to Rashaad Ernesto Green’s extraordinary Gun Hill Road.)

Guerrero: I don’t feel like anyone has tried to box this film into one category. To be honest with you, they can’t. When you watch the film you realize it’s not just about sexuality, it’s about immigration – it’s about class and gender. The characters themselves embody the intersection of these identities and life experiences. That’s what this film does – mixes it all together without being so literal about identity. I think it’s refreshing for festivals to program a film that isn’t afraid to put that representation out there. If anything, it brings an amazing mix of people to my screenings.

Filmmaker: The other thrill for me while watching the film was discovering the wise-beyond-her-years Fenessa Pineda, who plays Yoli. She’s absolutely mesmerizing in her understated portrayal. She could easily be the next America Ferrera. How did you find her?

Guerrero: Honestly, sometimes I feel like the clouds just parted and dropped her on my lap! I was about two weeks from going into production and I still had no Yoli (Mosquita) or Mari. You can just imagine how terrified I felt inside. How could this film work without my Mosquita and Mari? I mean, almost every scene rests on the shoulders of these two girls – especially Yoli. I think what helped me was what I had learned from our Kickstarter campaign – to keep the faith! I mean, after raising $35,000 in 48 hours, there was no room to think that I couldn’t find them. Along with the casting team we kept looking and looking when finally Yoli, played by Fenessa Pineda, walked into one of our casting sessions. I wish I could say she had absolutely no experience and I had everything to do with her performance, but she did have some background in acting for television and was in a couple of films. In auditions it was very apparent to me that she had a very natural way about her reads, and that she would lend herself to the other actor in the scene. Only big gamble I took was casting her as Yoli when she came in determined to read for Mari. It might have been a stretch for her to play someone she’s not like in real life but I knew she had the chops to pull it off. Plus, no one could deny the power of that girl’s smile. She could win anyone over with that sweet look, including a hard-ass Mari. She’s wonderful and I’m really happy that Outfest honored her hard work with a Best Actress Award. She deserves it.

Filmmaker: Back in 2006 when you were selected as one of Filmmaker magazine’s “25 New Faces of Independent Film” you said, “Everything I do as a filmmaker is to help create a movement…Not an isolated movement, but one connected to other revolutionary movements that work together to shake people out of their sleep and into a place of wanting, desiring, needing social change to happen in this world. That’s why I’m here, doing what I do as a filmmaker.” What’s changed in six years? Is this still your mission statement or has it grown into something else?

Guerrero: I think that this mission I wrote for myself six years ago was about having a purpose as a filmmaker. To varying degrees I will always strive to produce work that pushes the status quo. I don’t see myself engaging the art of making films if it’s not helping marginalized communities in some way. That’s why I became a filmmaker. That’s my calling, and my blessings come from that purpose.