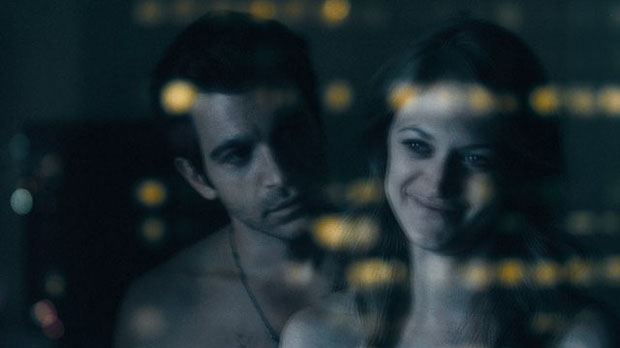 by Sarah Salovaara
in Directing, Directors, Filmmaking, Interviews
on Nov 8, 2012

Matt Ross’s directorial debut is an inventive look at an affair between a married account (Marin Ireland) and a novelist (Chris Messina) that unfurls within the walls of 28 hotel rooms across the country. Dictated by checkout times and the call of the “real world,” their truncated encounters are marked by a growing sense of urgency, as their physical connection turns emotional. Ireland and Messina shoulder the challenge of being the sole recipients of Doug Emmett’s lens with magnetic grace, crafting their characters’ dimensions in varying increments of restraint and ebullition. 28 Hotel Rooms, currently streaming on iTunes and VOD, opens in LA on November 9, and New York on November 16. Below, Matt Ross speaks about bridging the gap between vision and execution.

Filmmaker: This is very much an actors’ movie, which makes sense, because you are one. Did you know from the outset that you wanted these two characters to interact inside a vacuum, with their baggage only manifesting itself through dialogue, or did you toy with the idea of bringing significant others into it?

Ross: From the beginning, the idea was always to make a film with only two characters. I wanted to examine a relationship from the inside. There are serious limitations and problems (both cinematically and narratively) if there are only two characters in the entire film, but I also thought it was one of the things that made it unique.

After our first round of editing, for a hot second, we did toy with the idea of expanding the narrative, of actually going home with them, meeting their partners, and seeing their home lives. The more I thought about it, however, that’s just a different movie. It felt less special. It felt like one that I thought I’d seen before.

Filmmaker: How many hotels did you actually shoot in? What was the location scouting process like? Were you looking for a certain something for each of the 28 rooms? For instance, as their relationship becomes increasingly strained, the conditions of the rooms degenerate as well, often growing more cramped and stale. What could be the breaking point occurs in a hotel virtually atop an airport runway.

Ross: We only shot in 20 hotels. We were able to squeeze out two—and sometimes three— rooms in a single day because the layout of rooms (corner room vs. center room vs. suite, etc.) was significantly different enough to mask that they were in the same hotel. A few hotels had rooms that were painted different colors, or had different wallpaper and/or furniture.

I can only remember one occasion where the d.p. and I could actually scout a room prior to shooting. I had storyboarded the whole film, which makes for a lovely comic book, but we had to throw it out almost immediately because we simply didn’t have access to rooms until we were there to shoot. Every hotel room has a bed, a bathroom, some sort of a desk, a chair, so though it would have been nice to see the room, it wasn’t entirely necessary.

Originally, yes, we did choose each hotel room to reflect, in some way, what was going on in their lives or in their relationship. I didn’t want it to operate on any kind of conscious level. [Since] the only production design we [had was] in the choosing of the rooms, I hope it’s extremely subtle.

The task was really about arriving in a new space, seeing where the actors wanted to move, and then crafting images – through shots and lighting – that was not only different from what we had done before, but also that reflected or augmented what the characters were experiencing at this particular moment in their lives.

Filmmaker: There’s no semblance of time in the film, which tends to feel nonexistent when cooped up inside a hotel room with the blinds closed. How did this inform the trajectories of your two characters? Also, what came first, the characters or the setting?

Ross: Their self-imposed isolation – where time stops – is both heaven and hell for them. They create a little paradise, but one that can only exist in tiny hotel rooms, and only for a day or two. So in terms of time, their isolation is literally unsustainable. Their time always runs out. And eventually, the bubble will burst and they will be forced to confront this relationship in some form.

I knew that I wanted to examine a relationship, examine just two people, so that came first. And then I thought that the relationship might be an illicit one, one under great external pressure. Then lastly, the idea of the relationship existing only in hotels came up. It flowed naturally when you ask, “Well, how can this possibly go on for so long?”

Filmmaker: We never see the man and woman meet, which I appreciate. Why is that?

Ross: The original idea, in the shooting script, was that the very last scene of the movie was the scene in which they actually meet. The idea being that after you see this long-term relationship blossom and grow, see all its ups and downs, it was revealed that their initial meeting was actually nothing special whatsoever. It was supposed to be the opposite of the movie bullshit idea of love at first sight. It was two tired, lonely people who connected for a moment in time and had every intention of forgetting it immediately. They had no idea that it would become perhaps the most significant relationship of their lives. That felt true to me.

As shot, however, the scene just didn’t convey those ideas strongly enough. Which was my fault. And as we edited, my mandate was always less is more. When we aren’t spoonfed what we’re supposed to think or feel, but instead are asked to draw our own conclusions, then we become actively involved. I like movies that do that to me, anyway. So as I tried to cut away anything that was too on the nose, I just didn’t think we needed to see the meeting. It’s the result of the meeting that matters more.

Filmmaker: Some of the dialogue, particularly in the earliest scenes, is incredibly natural. How tightly of a script did you work with, and how did you go about your directing process?

Ross: I wrote a script. It had a three-act structure; there were crafted arcs, a climax, etc. Then Chris and I workshopped it, on-and-off, for about 9 months. Then we brought in Marin and continued that process. I wanted them to infuse the script, as much as they wanted, with their own issues, ideas, and histories. Mike Leigh and his process were certainly an inspiration in this regard.

Some scenes were shot word for word, others entirely improvised. I wanted to make a film that invited the actors to take an active part in the narrative. Not only did I want Chris and Marin to be free enough to change any of the words or any of the blocking at any moment, I also asked them to come up with additional moments or scenes and some of these were completely improvised.

I’ve said this frequently, but my goal was to create an environment where the actors were not required to deliver a performance between “action” and “cut.” Our days and time were scheduled so that they could actually explore on camera.