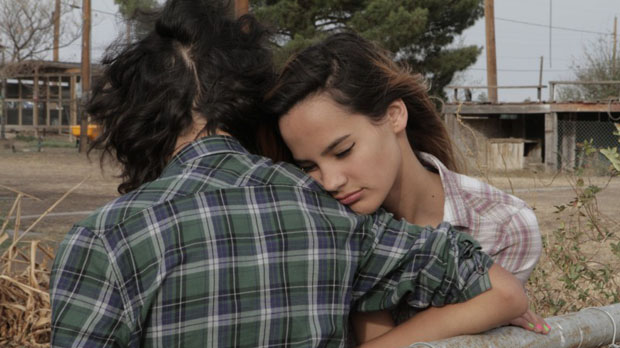 Border patrol police and racial tension are not your usual ingredients for a teen movie. Like the adolescent characters they feature, teen dramas tend to be self-referential: they are rarely concerned with anything beyond drugs, unprotected sex, and emotional confusion. Larry Clark, best known for his 1995 film Kids, specializes in this genre, but his latest feature, Marfa Girl, somehow eludes the teen canon to offer a diagonal take on an oft-predictable format.

Marfa Girl takes place in a small Texas border town that is home to a community of artists and a threatening number of border policemen. While hostility between teenagers and adults often plays out inside the walls of the family home, in Marfa the conflict plays out on the streets. While the clash between border policemen and arty teenagers is by no means peaceful, it offers an opportunity for exploring the cause of the bitter hatred on both sides. What may seem like gratuitous and unmotivated violence, though still appalling and unjustifiable, resonates with a bitter authenticity. The film avoids moral condescension, seeking to unearth and understand the complexities that exist on both sides of the conflict. Marfa Girl attempts less at narrative development than at examining the nuances of a place that, in Clark’s own words, holds up a mirror to American society at large.

Filmmaker: How did the idea for your new film come into being?

Clark: I wanted to make a movie for the Internet. These days everyone one is on it — emails, social networks and all that. I have kids and they are constantly connected to it. I send them a message and they get back to me straight away. It’s so hard to get a film made, especially an art film with your own final cut. So I thought, “Why don’t I just do it myself, set up a website and get it going.” I decided to get rid of the middlemen, producers and the like. Anyway, they’re all crooks; I never got paid for my movies. The Internet is happening, people make a video and it gets a million hits, so fuck it, let’s do it.

Filmmaker: Though labels never fully encapsulate the nature of a movie, in Marfa Girl it is as if two quite different genres, the teen drama and social realism, meet and interact. Was that a conscious choice?

Clark: Of course it was. I think that the things that happen to us when we’re teenagers form us as adults. The way you’re gonna be when you’re an adult is because of what you went through as a teenager. And this film is very much about that, how people act out later in their life is connected to their past experiences and in fact the characters in the film at some point share their personal stories, tell what happened to them. You get to see why they do what they do today, explore their different stances. It’s all set in this small Texas town of 1800 people, Marfa, where half the population is Hispanic, with a massive presence of border patrol police as well as an art community. There is an art foundation there so artists go to Marfa, but they kinda keep to themselves, they don’t really hang out with the locals and there is clearly is a strong culture clash going on there. Furthermore, the place is also the headquarters of the border police so you have loads of police with nothing to do but fuck with the [Hispanic] locals. It’s pretty racist to say the least. I believe it’s a kind of microcosm of what’s going on in American politically these days. So it’s about all these things and these kids trying to navigate life in a town where there is no future, no jobs, no prospects whatsoever. Their dream is to get the fuck outta town. Larry Clark on the set of Marfa Girl

Filmmaker: Can you talk more about how you discovered that place and why you felt it was the right setting for your film?

Clark: I have a friend who is from the East Coast; he is an artist and he was invited down there by that foundation I was mentioning before. I really liked the place, it’s a very magical kind of a place. Giant was shot there in the 50s, which happened to be James Dean’s last movie. It’s about racism between the Americans and the Mexicans, with a very young Dennis Hopper being in love with a Mexican girl. With the border patrol now the situation is very similar, tension is high. There is a curfew there for people under 18 and if you happen to be brown and out at night, the police tackles you down and throws you over the fence. That actually happened to Adam (one of the actors in the film) and that’s where I got the idea for the scene in my movie. They just do that, a 16 year-old kid born and raised in this town. It’s that kind of town where until recently…actually I’m not even sure you can buy a condom in this town. It’s such a Christian town with loads of teenage pregnancies. But they of course don’t talk about that though it happens every day. And then you have rich artists coming to town, buying up things while the locals are pretty hopeless.

Filmmaker: It was really interesting the way the film explores the lives of the border policemen. Were their life experiences based on research or real-life encounters?

Clark: You know, I found out that I have an interesting way of casting people; I didn’t know itwas unusual, it’s just the way I do it. You probably know I just find kids and mix them with professional actors. When I was casting professionals for Marfa Girl in Austin, people would come in and read their parts but I don’t cast that way. When an actor or actress comes in I ask them what they do in their lives besides acting, because they often have other jobs since it’s very tough to be an actor, it’s all about rejection. So they would tell me about their lives, it was almost like being a psychiatrist. I was interested in these people. So when one of the actors playing the border policeman came in and told me he had actually served twice in Iraq, we talked about that a lot. The scene where he shares his thoughts about the war in Iraq is taken from his real life. When he starts talking about how he had initially believed all the propaganda about Muslims being bad, and how once he actually got there he realized those guys were just normal people like me and you. That’s all his material, nothing was written. That’s how he felt, that was real life. Cassavetes used to get those moments on camera too, just pure human feelings.

Filmmaker: Are currently working on a new project? What are your plans for the immediate future?

Clark: Well, I wanna do a trilogy with the people I just worked with in Marfa Girl. I am also working on a French film. I had a retrospective of my films at the Museum of Modern Art in Paris at the end of 2010 where I met a young French poet and I got this idea for a film about the youth of Paris which he actually wrote for me. He wrote a brilliant script and I was supposed to shoot it this year but the fucking producers said they had the money but they didn’t have all the money, I’m supposed to start shooting by January, so hopefully that will happen. They are now trying to postpone it to next year but the kids are gonna be grown… These fucking producers, I told them, “If we don’t shoot by January, fuck you! You know, I’m not gonna do it. You gotta get the money now or I’m out.” And then I have another film I wanna make in California which I tried to make already a couple of years ago. We had started casting and all that but the goddamn producer had lied about having the money…His name is Paulo Branco, he’s a famous French producer originally from Portugal. He produced around 250 films, he’s a famous guy but he’s a crook, a fucking crook. He never paid me. I worked my ass off. We got into 10 days of making the film and he was lying about having the money. He shook my hand and told me, “I’m gonna give you your money Larry”…I’d like to see him again. I’m not threatening anybody. I’d just like to see him again. I only have one rule: don’t fuck with me and don’t fuck with my movies. And this guy fucked with me.