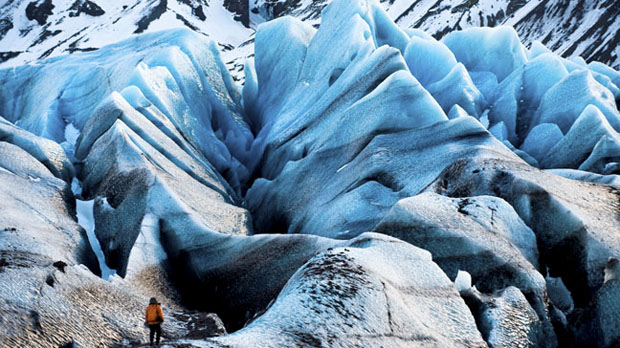 After years of shooting in extreme conditions, National Geographic photographer James Balog finally realized he could no longer ignore the slow disappearance of frozen landscapes he’d come to know and love. In Chasing Ice, director and cinematographer Jeff Orlowski documents Balog’s ambitious plan to install 25 separate time-lapse cameras across the globe in order to record receding glaciers and shifting ice, dire omens of a changing climate with no audience to bear witness. All the while Orlowski follows directly behind, shooting in dog sleds and ice crevasses, capturing the troubles that beset the most impassioned plans and what one man is willing to risk for the perfect shot. Filmmakerspoke to Orlowski about the unique challenges of making the film.

Filmmaker: Balog’s documentation of receding glaciers across the globe is a multi-year endeavor in the film. What was the timeline of following his mission, and the making of Chasing Ice?

Orlowski: I had the opportunity to join James Balog to Iceland on the first trip to install cameras in 2007. Chasing Ice follows his journey since that very first field expedition. The film took about five years to complete, and Balog’s time lapse cameras continue to shoot to this day.

Filmmaker: The documentary follows Balog and his various assistants to multiple continents and vast frozen landscapes, often with the camera crew following right behind, as the team collects time-lapse stills recorded over several seasons. What were the challenges of shooting on location in such extreme environments? How did those challenges inform what we see onscreen?

Orlowski: Some of the challenges were not being prepared for the freezing temperatures in terms of clothing, and [working] with delicate equipment in harsh weather conditions. I learned how to repel down canyons while carrying a camera and capturing footage. I would say this was far from what I initially expected when deciding to accompany James on his endeavors. The film is about the challenges we faced to capture rare footage of glaciers around the world. In one scene, James and Svavar are barely able to walk down the beach due to an immense sandstorm. In another scene, we see James on crutches hiking in the snow after a knee surgery. The trials and tribulations that the crew go through is present throughout the entire film and it is those moments that remind the viewer just how difficult this project was to accomplish. 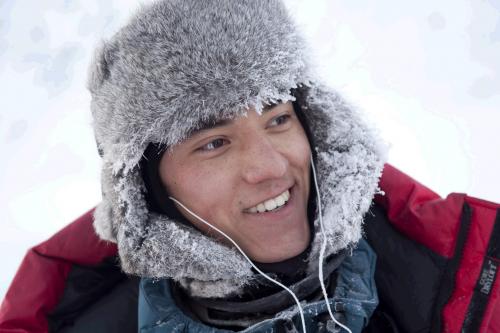 Director Jeff Orlowski during the filming of Chasing Ice

Filmmaker: Balog wears his heart on a sleeve in a scene where he discovers a time-lapse camera was non-functional for an entire season; he is clearly invested in bringing images of climate change to the world. As a filmmaker, how did you approach documenting him so intimately during his work, and later in more personal environments after he was injured?

Orlowski: We knew that we didn’t want this film to be a heavy “science” or “talking head” film, and the way we could get around that was with James Balog’s personal story. James was initially reluctant to let his own story play such a strong role, but we ultimately convinced him that this was the way the bigger message could get out there. It’s hard to watch James in some of the scenes, because it is so personal and so emotional. It’s hard to watch a grown man cry, and when I look at the source footage from that scene, I can’t help but get very emotional myself. After seeing the film, many people have told us that they wished they had a level of passion for something like James had for this issue. His true dedication to his daughters and to future generations really shows.

Orlowski: Although the editing of the film took almost three years, it was a true delight to have so many amazing images to work with. We always knew that we needed to incorporate James’s photographs as much as possible. Just like James fell in love with his subject of ice, we want the audience to fall in love as well. And we had these really powerful time-lapse images, and we needed the audience to really want to see them, and to really want them to work. So we teased the time-lapses a little at the beginning and middle of the film, but ultimately held off on revealing the full time-lapses until the very end.

Filmmaker: As you acknowledge in the opening sequence, climate change still sparks a lot of discussion in the contemporary world. When you were making the film, what did you hope audiences would glean from the experience of watching it? In reality, how have audiences responded thus far?

Orlowski: People have really been responding well to the film.  It has been above and beyond our wildest expectations. And although this wasn’t the original intention, people are really saying that the film is shifting their opinion of climate change. We just wanted to share James’s experience and his images. And if people come out of a screening and say that they understand this issue in a different way, and that they recognize it’s real and it’s important, then that’s a huge success.