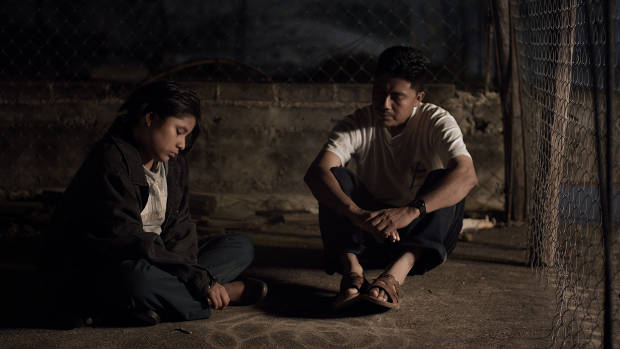 by Billy Brennan
in Directing, Directors, Filmmaking, Interviews
on Dec 21, 2012

Aquí y Allá (“Here and There”) is a film about home and separation; of returning to where you left and trying to reintegrate with a life that has, for all intents and purposes, gone on without you. Dreams and opportunities; responsibility and consequence; hope and fear–these are all central not only to the film, but to the day-to-day life of every human being around the world. As such, Aquí y Allá exceeds the admittedly weighty (and very touching) premise of Mexican emigration to the U.S.–and all the tensions and the void that can come of it–to strike a relatable chord regardless of ethnicity, class, politics and what-have-you. On the relevance of the film’s plight, director Antonio Méndez Esparza says, “Now we have so many people moving to other countries, for economic needs. But I think even non immigrants can relate very much to the chore of the film. And in that way I think the film is universal.”

Aquí y Allá is Esparza’s feature-length debut, but the Columbia grad and Madrid native (though he has lived in Madrid, NYC and Mexico for the past decade) is not new to the stories held within. He has been making short films dealing with Mexican immigration and the lives affected for years. For his latest, Una y Otra Vez (which won Best Narrative Short at the 2009 Los Angeles Film Festival and was a finalist for the Student Academy Awards among other honors) , Esparza became friends with Pedro De los Santos. The erstwhile grocer who left his life behind in Mexico, and dreamed of returning home to his family and starting a band would go on to be the protagonist–and a driving force–behind Aquí y Allá. Below, the director sheds some light on the movie, Pedro and the strife of separation.

Filmmaker: Why was it important for you to address this story in your feature debut?

Esparza: I had made a series of short films, dealing with Mexican immigrants in the US, and trying to approach their situation. Usually love stories, daily lives, and occasional hopes. Perhaps the characters in the scripts were too drawn by me, and so, in a way, they were not fully successful as a portrait. I think I was first moved by a mix of admiration, for leaving loved ones, and the attitude towards living toughly in a foreign city–a constant resilience. I meet many of them, and in my last short film, I met Pedro De los Santos, and after we finished shooting, we became friends. He told me, that his idea, was to return to his home and to start a music band. I found it surprising and hopeful in a way. A little romantic even. I wondered about making a film about “home”–in this case, the home you leave behind.

So I started thinking about making a film about his return home. He went back, and a year after he was there, with a version of a script I had many doubts about, I went there, and spent a few months. And there I realized the film was possible, and important for me. To tell a very particular story, but very universal, of a return home, and of trying to fill the place you left. I dived into the film to try and understand more this particular fictionalized family, sacrifices, consequences…I tried to watch and learn. And share that experience with the audiences.

And the film was about a particular location, Copanatoyac, and its surroundings areas. There was never any doubt, that to make a film about that region, you had to cast people from there. If there is any message with the film, as if just a statement like “we are here”, it can only be validated with this. A film can bring some light, or notice, and that was part of the nature of this film.

Filmmaker: How much of the story follows Pedro’s real-life experiences since meeting him in NYC?

Esparza: This is a great question, that I have discussed with him a few times. Some things are close, like the hospital part, having problems with a pregnancy, the work in the fields, waiting to be hired with his band, rehearsals. However, we did add different obstacles and surprises into the story. The distance with his daughters was something he mentioned slightly, but we created the scenes, the story with Lorena, etc. I believe it is a mix of my impressions on his own life, some confidences and my own inventions.

Also, making the film, I did want to hopefully create a bigger collage, a bigger portrayal of the village, and that was very much a collection of stories, conversations, and so on, that we tried an include in the final edit. Of course, while shooting, I thought the film was going to be 3 hours long, as we would include everything from my perspective…in the end is not so monumental, but I did have this feeling of collecting stories, memories, and reconstructing them.

Filmmaker: Do you think the tension of staying vs. going (the the U.S.) creates a stigma within Mexican communities and families? How so?

Esparza: I think it does create many ups and downs. As Pedro, the lead actor mentioned in the screening in Mexico, he said, “we leave to the US because we have to”. It is simple and many times plainly true. Then, there are all the consequences, distant families, daughters and sons growing without fathers/mothers…but also there is a upside, Pedro, for example, wouldn’t have the house he has, if he didn’t go to the US. It may seem a humble home, but is better than others in the village. Also the band, and many other things. I think, and the movie I believe tries to show, it is a difficult position, and everyone does decide at some point what may be better for them. To stay or to go. And I believe those decisions, do linger in your head, for some time.

Also something I learned, while there, is how they did face things that for me were critical. For example, the crossing, which is a very dangerous, sometimes mortal. However, the fear of crossing is not in the surface, or in an intimate confession. It’s something they face when going, but not the main reason to decide not to cross. The way people I interviewed or talked to willingly face the unknown of the crossing, was remarkable.

Filmmaker: How powerful is the individual internal strife of immigrants in terms of following their dreams [ie Pedro’s band and life at home] vs. the opportunity to provide a better life [leaving family behind to be able to earn more in the US]?

Esparza: The fact that Pedro, is also a self-taught musician who hopes to play in locations in his region, was for me a discovery. However, many times, at least I do, we have this false notions of places and lives in distant places. We imagine things, and usually those things we imagine are in fact very different. In Copanoyac, which is maybe an 800-1000 people village, there are 5 bands, and maybe 5 sonidos (djs). It is quite a number. And all other villages are like that. Once you know, you see along the roads, all this writings in walls, of bands that exist, are brand new, or that they disappeared. So I would say it is a common thing.

In the case of Pedro, is true that he has this artistic aspiration, which I believe is beautiful. The strife will also be there, if he wanted a taxi (will he make enough?), open a bar (will he make enough?). I think that question, is always there in Guerrero. The other side, the U.S., does have some glow, but the ones that come, know well enough how difficult it can be here. The film in a way shows that strife.

Filmmaker: What were some of the difficulties and successes that arose in making the movie?

Esparza: The difficulties were many, but mostly logistical, and the whole crew came together to be able to finish the film. The first days were difficult, but after a while, it was possible. Thanks to all of them, especially to Juan Raigada (AD), and Teresa García (Line-producer), who during the shot, were always very supportive and found a way to make it work. The rest of the crew endured so many hard days–hard months! They all know how much they put in so that we could make the film.

With the actors, it was a little easier for me, as I was always worried for them, and we tried to make it as easy as possible in a low budget film. I believe by the end they were exhausted, but now they may miss those days (a day or two). The producers of the film, were as much in love with the film as I, so we were always fully in the same boat. That was a blessing. Of course there are problems, but we always solved them, and by the end, we are all a team. I think the biggest success, for all, was to be able to make a film we all are proud of, and all are a part of. It seems easy, but it’s not.