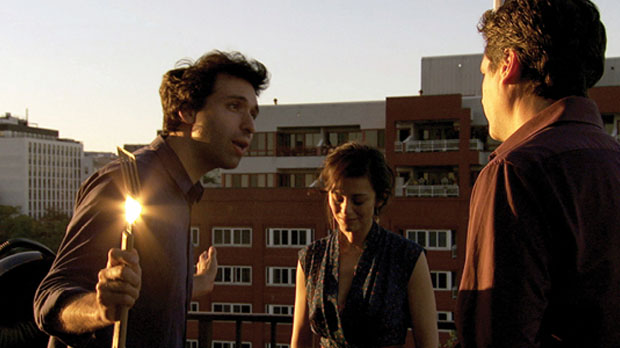 by Brandon Harris
in Directing, Directors, Filmmaking, Interviews
on Feb 13, 2013

Director Sam Neave and his producer/star Marjan Neshat are both Iranian-born, but the films they tend to make together — including 2003’s Sundance entry Cry Funny Happy and their terrific new two shot high-wire act Almost in Love — focus on the romantic travails of upper-middle-class Westerners in ways that are as funny as they are earnest. Their newest film, despite its intentionally schematic, downright arty structural contrivance, is a surprisingly rich meditation on friendship, the difficulty of settling down and the importance of being earnest. Performed in humorous and melancholy shades by an odd assortment of performers, most notably Ms. Neshat, Gary Wilmes, Alan Cumming and Alex Karpovsky — who was born to play a baseball nerd looking for love — it is much more engaging than it probably has any right to be, a sneaky crowdpleaser.

The film is comprised of a pair of 40-minute-plus takes. The first covers a sunset barbecue on a Staten Island veranda that holds a stunning view of lower Manhattan and a significant share of barely concealed jealousy, lust and witty good humor. The first shot sets up the second, which takes place 18 months later, during the dying hours of a wedding celebration which has lasted until sunrise and involves most of the same individuals. In this half, the characters have relocated to a Long Island beach home to celebrate a union that subverts and complicates the implications of our first 40-minute visit.

Almost in Love opens at the reRun Theater in Dumbo, Brooklyn on Friday. 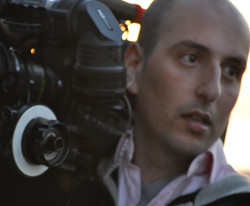 Filmmaker: So clearly you’re a “mise-en-scene first” type of director, no? What compelled you to tell this story, and to tell it the way you did, in two shots?

Neave: It’s true that the idea of doing a film in two shots, timed to a sunset and a sunrise, was an idea that seemed irresistible somehow, but I actually had the story in mind from way back. It just seemed to make sense to merge the two once the form presented itself.

As an editor, I’ve always had to be sensitive to the length of shots and rhythms of cutting. There’s obviously something that happens in the long take that is different for the viewer. Going back to the old Walter Murch ideas about a cut being the film equivalent of a blink then in the long take it’s as if you’re not allowing the viewer a chance to look away — or take a breath. This sounds like torture but it can actually feel quite relaxing, I think. In this film, both of the scenes are party scenes (a barbeque and a post-wedding hangout), and I wanted the audience to feel like they were at the party, lurking in the background and observing everything that’s going on around them. My hope is that the long take adds to this real-time, single-space atmosphere. On the other hand, my real aim is that a lot of this happens on a sub-conscious level — if we’ve done our jobs right then you get involved in the story and forget that it’s one take until it’s over.

Filmmaker: How protracted was the rehearsal period, for both your actors as well as your crew, given the extraordinary nature of what was required? Did you allow for improvisation in rehearsal that you incorporated before you began shooting or was the entire thing designed very specifically and carried through?

Neave: I wrote a script for the whole thing, focusing on the dialogue that we would see on-camera and we had several rehearsals before the first shoot. During this period we tried to choreograph the actors’ movements and also the camera. I was the dolly-grip for the first shoot partly because we had hardly any crew but mainly because I was the only one who knew where we had to be at any moment!

I’ve always encouraged improvising throughout so things were definitely kept loose as we got closer to the shoot. In particular, for those people who were off-camera, it was vital that they stayed in character and continued to improvise dialogue. Later in the sound edit, since I had everyone on separate microphones, I was able to use some of this dialogue in various places. For the people on-camera it was necessarily a more rigid affair — you had to get to a certain spot and certain things had to be said at certain points.

The biggest diversion from what I had in mind was the second half. I had originally written a script for Sasha and Mia (Alex Karpovsky and Marjan Neshat) in a hotel room but, without giving too much away, I didn’t think what I had in mind would work anymore. One of the few benefits of working this way was that we had a protracted break in between the two shoots during which I could watch what we had filmed and then assess where the story and these characters wanted to go next. So I scrapped the script I had written and we started over in a totally different direction.

Filmmaker: It had to be akin to putting on a play in some ways as opposed to a traditional film shoot, I imagine. Once you started shooting, would you stop takes to immediately give notes, or, given the nature of the stunt, were your instincts to let things ride a bit given that you were going to have to live with the enormity of each take?

Neave: The rehearsal and the shoot was essentially like a play, yes, although with far less rehearsal. The tricky thing about the shoot was that you only really had one shot a day, since we were timing it to the sunset and sunrise, so there was no chance to stop and start. Once we started rolling, it was in the actors’ hands until the next day…

Filmmaker: I find it odd than an ex-editor would want to make a film that tells its entire story in just a couple of shots. Is there something telling about that?

Neave: Outside of my thoughts about the long take I’d say that although the picture edit was a total cinch, the real challenge was the sound edit. I had about 15 characters on individual mics and one of the things I wanted to play with was moving the audience around the space via the sound. So sometimes we would watch a couple of characters while hearing another conversation, again trying to give that feeling of being at a party and hearing multiple conversations bleed into one another.

Neave: Outside of the normal challenges of making films on this scale, it’s obviously a huge risk to do a shoot like this because you could very well walk away without a movie at all. We basically cobbled together a tiny bit of cash to do the first half and once we had pulled that off we took the time to raise money for the second half. At that point I could show what we had done in the first half as proof essentially that we weren’t completely nuts. It also helped a great deal having Alan Cumming sign on for that second half!

Filmmaker: Did you always have Alex Karpovsky in mind for the central role? You had worked with him before in an entirely different capacity, correct?

Neave: I’ve known Alex for about 15 years. We met in college acting on stage in some dubious productions. I consider him a great friend to this day. He played a small but hilarious part in my first feature, Cry Funny Happy, and then I also edited his first feature, The Hole Story. I always had him in mind for this part; we were both drawn to this idea of the sports nerd/writer as someone we could have fun with.

I also like to work with the same people a lot, people that I know well — I guess this goes back to the theatre-like atmosphere of the shoots. I’ve used Daniel McKeown as d.p. for all my features, my wife Marjan Neshat is in all the movies and Darrill Rosen has been in all of them too. I’d never worked with Gary Wilmes before but we became fast friends before the shoot and we had a lot of fun doing this project together.

Another opportunity on this shoot was incorporating non-actors into the mix. We’ve got a couple of great writers in there — Hari Kunzru and Adam Rapp; Kathleen Horan, who is a journalist for WNYC, and Adam Matta, who’s a musician and beat-boxer. I figured it would add to the atmosphere of a party to have some non-actor friends mixing in the action.

Neave: Honestly there was only ever one take that was usable — the last take in each case. The penultimate ones on both shoots had some great things in them but technical details meant that we could only ever really pick the last ones. Again, a pretty nerve-wracking prospect when you’re going into the last day of shooting knowing that you don’t have it yet!

Filmmaker: Has your relationship to it changed since you made it? Is it much the same movie you once merely imagined? Does it mean the same things you wanted it to?

Neave: It’s been a while now since we shot it and since I’ve even looked at it so it’s safely set as its own thing by now. One thing with this film was that there was no picture edit to pore over so I didn’t watch scenes over and over as you normally would. I suppose this means it was still half-fresh for me by the time it was done. On the other hand, doing something in two long takes means you quickly give up the idea of perfection, even more than usual and you have to live with all the mistakes forever. What I feel works best about the movie is that sense of being at a party and it seeming like somewhere I’ve been before.

For the rest, it’s up to the viewers now. I’m very pleased that we have been able to show the movie and that it’s getting a theatrical release because it really does work better as a group experience. And the casual, alcohol-fueled atmosphere of somewhere like reRun is perfect for this film so I’m excited for the run.

Filmmaker: Could you conceivably continue making movies in this vein, or do you see this stylistic conceit as a one off?

Neave: No way. This is definitely a one-off! I will of course do long takes again but there’s a reason movies don’t get made this way very often.