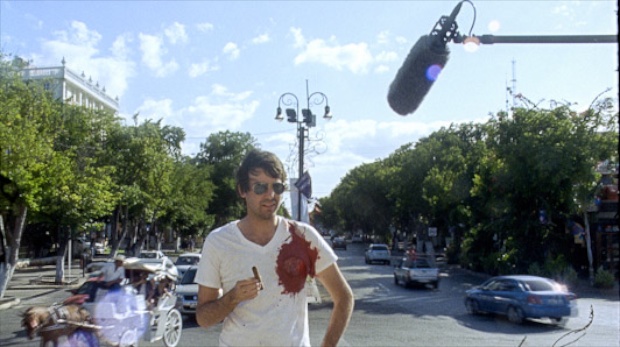 Appearing in the Wavelengths section of the 2013 Toronto International Film Festival is La última película, an experimental comedy about filmmaking and the apocalypse by two directors joined in collaboration by CPH:DOX’s DOX:LAB program. Filipino director Raya Martin (Independencia) collaborates with Canadian critic and filmmaker Mark Peranson on a crazily cinephilic conceit: remaking Dennis Hopper’s The Last Movie as, literally, the last movie. The Color Wheel‘s Alex Ross Perry stars as a “disillusioned and delusional” filmmaker traveling to the Yucatan to make a psychedelic Western in the days leading up to the Mayan Apocalypse. Nicolás Pereda star Gabino Rodriguez plays his guide, and the film, shot in only eight days, is a feverish blend of formats and documentary and fiction styles. I spoke with Peranson (his directing partner, Martin, did not attend the festival) for a few minutes at the dim sum brunch of his film’s Canadian distributor, Films We Like, to learn more.

Filmmaker: So what was the genesis of La última película?

Peranson: It’s a CPH DOX:LAB film. They have been asking Raya to do [the program] for a long time but he said no because he didn’t want to do a film with someone he didn’t know. You need a first world filmmaker and a third world filmmaker to do [that program]. Raya and I had already worked together on the Great Cinema Party, where he flew a bunch of people to Manila — I was one of the participants in that. At that point we were talking about maybe doing something together, and the DOX:LAB thing came up.

Filmmaker: So what happened after you agreed to collaborate?

Peranson: We met in CPH:DOX and hatched this idea for the film. We wanted to shoot the Mayan apocalypse, and this was October and that was December, so we had to move quickly. The thought process was, the questions normal people would ask themselves as the end of the world is approaching would be how they’d spend their last days, what their last meal would be. Cinephiles would ask, what’s the last film they’d watch? And, as filmmakers, it would be, what would be the last film you would remake? So, I said, logically, that would be The Last Movie because it was called “The Last Movie.”

Peranson: Yes. But it’s impossible to remake The Last Movie on $20,000 in seven days. But there are elements of The Last Movie in our film. It’s an homage. I also came across The American Dreamer, this amazing documentary about the editing of The Last Movie. Hopper is credited as a co-screenwriter of that film, and it’s early example of a hybrid. There are scenes of Hopper shooting guns in the forest, pontificating about cinema, trying to seduce women. It’s an amazing film with a very strange funk-rock soundtrack, and we tried to incorporate elements of it. We reconstructed some of the interviews with Alex Ross Perry as Hopper, except he’s not really Hopper — he’s a filmmaker character composed of many people, mostly “Alex Ross Perry.” Then we came up with the conception of a film where Alex is a filmmaker coming to Mexico to make the last film before end of the world, and the last film period, because he has bought all the celluloid that is left. The first half of the film is him looking for locations, then we see excerpts of some of the film he’s made, and then he talks about the editing process and his theories on filmmaking, and it’s shot on eight different cameras: 16mm, Super 8, three different SLRs, Panasonic AF100, GoPro, iPhone and Handicap, and two Bolex’s.

Filmmaker: Aside from the conceptual stunt of remaking The Last Movie as “the last movie,” what were the broader themes you were getting at here?

Peranson: The Last Movie was supposed to be shot in Durango, Mexico, so this is making The Last Movie where it was supposed to be made 30 years later. But we’re also talking about the rhetoric [of that era], observing how that rhetoric and that kind of filmmaking had a kind of anarchic honesty or authenticity in 1971 but, by the time 2013 comes around has a kind of inauthenticity, or parodic element. We weren’t trying to make a parody but necessarily by the means of the situation and the humor Alex brought to the project a definite skepticism comes across. So, there is an attempt to deal with questions of honesty, authenticity and sincerity, but we knew that it would come across as insincere and inauthentic just because of the way people’s minds have changed from 1971 to 2013.

Filmmaker: How were you able to make a film mixing all these formats on such a tiny budget?

Peranson: CPH DOX:LAB only gave us 13,600 euros, and we decided to make a feature [instead of a short]. [The final budget] turned out less than 100,000 euros, including 50,000 for music rights, and finishing on 35 mm. We have a private investor, won prizes at the Riviera Maya Film Festival, and some of it’s my money. And Films We Like is our distributor in Canada. You know, I produced, I edited the film and I co-directed. Right now my plan is to show it here and see what happens. It’s an avant-garde feature, but it is also a comedy, and there are actors in it who are recognizable and have niches of fans. And it is also a document of what happened in Mexico the week before the Mayan Apocalypse. So there are hooks.