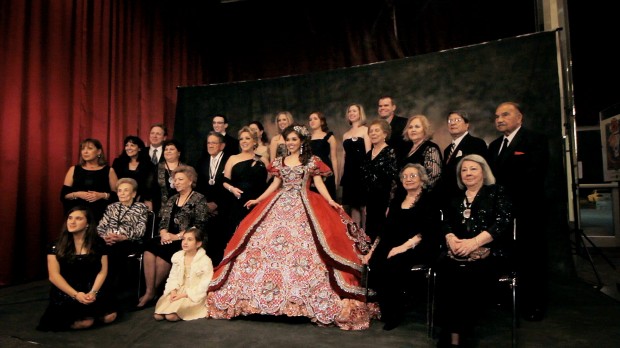 Set in the south Texas border town of Laredo, Las Marthas tells of a century-long tradition in which debutantes from both sides of the border commemorate George Washington’s birthday. Both the film and its subject matter stand apart from so many negative expectations about the U.S.-Mexico border — there is no talk here of the drug war or weapons trafficking. Instead, the month of celebrations that culminates with the debutante ball involves a surprising amount of bicultural, binational and bilingual events that transcend a myriad of boundaries and speak more loudly about not only the countries’ shared pasts but also the ideal of a place full of possibility and open to anyone.

Texas’ complicated history and symbiotic present with Mexico is spotlighted in Las Marthas with its teenage subjects attempting to state their own identity within this state of codependence. Are they Mexican? Are they American? Can they be both? And if so, what does that mean?

These questions and many others come to life as we watch the teenage girls take a tradition once rooted in white, upper-class colonialism upon themselves. Their transformation from daughters of the border into extravagantly dressed and coiffed enactors of Washington’s era echoes the nation’s process of trying to define itself.

Director Cristina Ibarra and producer Erin Ploss-Campoamor spoke with Filmmaker about the process behind Las Marthas and how their previous experience tackling highly specific subject matter prepared them for putting a focus on this idiosyncratic event and its participants.

Filmmaker: When did the idea for Las Marthas come to you? How long passed between that point and shooting?

Ibarra: I grew up along the border, in El Paso, Texas, so I’m always interested in telling stories that look at the border in a new way. When we see it depicted in the mainstream media, it’s usually in the context of urgent social problems like the drug war, immigration, etc. While these issues are important, I feel like there’s another side to life on the border too. Over ten years ago, I went to visit my cousin in Laredo. All around town, I kept seeing local magazines with these pictures on the cover that looked like a Latina version of Marie Antoinette. I soon learned that these girls were debutantes playing a role in a local celebration in honor of George Washington’s birthday. I was immediately fascinated by the idea that a mostly Mexican-American community, in a city that used to be part of Mexico, was celebrating an Anglo-American revolutionary hero. I was already working on another project at the time, but the idea stayed with me. As soon as I got the chance, I started exploring the possibility of making Las Marthas.

Ploss-Campoamor: Cristina first approached the Society of Martha Washington about five years ago, and raised some initial funding through Latino Public Broadcasting (among others) to shoot two of the Society’s Colonial Balls. At that time I was working with her on another project, a feature length narrative called Love & Monster Trucks. But the more I heard about Las Marthas, the more I was intrigued. I was born in Canada, and raised since I was a baby by my Cuban-American stepfather, so I’ve always been drawn to telling multicultural stories. I soon realized that Cristina could use my help with this fascinating new documentary she was making. So together we raised additional funding and shot a third Ball, which ended up being the one we feature prominently in the film, and where we found our main protagonists. Altogether, I’ve been working with Cristina on this film for about three years.

Filmmaker: Who did you imagine your audience to be? As documentarians, do you worry that a subject you might be interested in might be too “specific” to attract a wide enough audience to make it worthwhile to distributors or exhibition platforms like festivals?

Ibarra: The audience was always intended to be an American public television audience. I find that the more specific I am in a story, the more an audience can connect to the film. Specificity has always felt like an asset in my filmmaking. One of our debutantes describes her coming-of-age experience now that she has seen the film, “Everyone knows what it is like to be a teenager.” And she’s right. Viewers can relate to her even if we might not be from the border, Mexican American or a girl even. The details of context, character and story are what make an audience feel intimately connected. This documentary targets young adults and U.S. Latinos of all generations and backgrounds. But I think this film will also find an audience in the broader market, among people of many different backgrounds and ethnicities, interested in themes of identity and reinvention.

Filmmaker: What obstacles did you encounter during the three(ish) years that you were working on Las Marthas?

Ibarra: Our subjects don’t fit into people’s preconceived ideas about Latinos. There are certain biases about both “border stories” and “girl’s stories” that we had to overcome. It took a few rounds of work samples and grantwriting to finally get through to people that this was not going to be just “pretty girls in pretty dresses.” The awareness of an upper class of Mexican Americans was only one dimension of the story, but it made some people uncomfortable because it breaks down that single story about the border only being about immigration, the drug war and poverty. Looking at the colonial gown the debutantes wear was a visceral way to look at the layers of identity, legacy and history of this group of women. The dress was a reminder that these girls quite literally carry the weight of this legacy on their young shoulders. I suspect that if we had been white men making a film about Mexican-American debutantes, it would have been much easier to convince people that we were talking about important cultural issues. It was hard to make people understand that our film was giving them a fresh and much-needed perspective on the Latino community.

Filmmaker: What about the making of Las Marthas made you into better filmmakers? And do you think you could have made this film earlier in your careers? If not, what previous experiences and lessons learned helped you the most while you were working on Las Marthas?

Ibarra: The first films that I created were college experiments with how to build a story. These exercises were just intended for an audience of friends and family, but they allowed me to find my voice. Before long, my storytelling started to reach a broader audience. After Dirty Laundry: A Homemade Telenovela — a short film I made from home movie scraps, telenovelas and my own fiction — made it to the festival circuit, it quickly became successful in the educational market as well and eventually made its way to PBS. I remember a woman coming up to me after it screened at the African American Women in Cinema Festival in New York to say, “That was me. You captured exactly who I am.” I was impressed that a middle-aged black woman from the Bronx would connect so passionately to a film about a 12-year-old Chicana from the Texas border. I remember feeling grateful that it had found a home and I asked myself what made it transcend from my original audience into a more general public. I think that the specificity of character, the authenticity of the story and the honest depiction of context helped people connect to the film in unexpected ways. Since then I have shaped a filmmaking career that is a deliberate and intentional search for an American public audience. No matter what approach I take, I always try to stay true to the principles of specificity and authenticity. This new documentary could have just as easily been made years ago because it speaks to my artistic desire to tell border stories with a fresh perspective. I keep returning to themes around cultural identity in all my films, since they continue to remain necessary and relevant.

Filmmaker: Erin, as an indie producer, what skills do you call upon the most to get projects like Las Marthas made? What would advise other indie producers are the strongest skills to cultivate?

Ploss-Campoamor: One of the things I love most about being a filmmaker is that everything you do helps you hone your craft. So even though my career has been somewhat circuitous — I’ve jumped around from directing short films to producing a feature-length thriller and now my first feature-length documentary — I feel like, at every step along the way, I’ve learned things that have made me a better filmmaker. Of course, it helps that some of these things are practical skills, like how to break down a script, edit in Final Cut Pro, or hold a boom pole (although my crew might consider that last “skill” of mine debatable). But more importantly, I’ve learned how to be patient, resilient, and trust my instincts. It’s very easy, especially when you’re an emerging woman filmmaker, to second-guess or doubt yourself. So if, for example, I had tried to make Las Marthas ten years ago, I probably would have struggled to withstand the intense pressure we were under to make the kind of film other people thought it should be. Luckily, I’ve gotten to the point now where I trust my vision, and I’m willing to fight for it. I can’t wait to see what happens next and I’m excited to return to a feature-length narrative script that Cristina and I have been developing, called Love & Monster Trucks. But I think Las Marthas is a great example of what can happen when the director’s vision and mine are so closely aligned. I’m really proud of this film.