“Stanley Begged Us Never to Talk About Him”: On Making Barry Lyndon 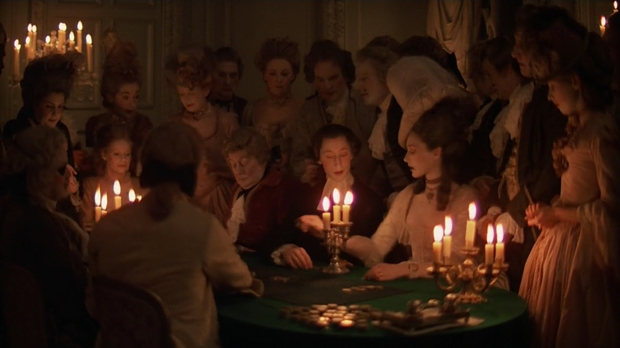 by Jim Hemphill
in Actors, Filmmaking, Interviews
on Nov 19, 2014

15 years after his death at the age of 70, director Stanley Kubrick remains more than ever a figure of admiration, fascination, and curiosity – and the pleasure his work provides seems, at this point, to be as infinite as the universe depicted in the final act of his 1968 masterpiece 2001: A Space Odyssey. A secretive and private director during his lifetime (though nowhere near the recluse he was largely reputed to be by the international film press), in death Kubrick’s process has steadily become more and more transparent, with a growing number of books, articles, and documentaries devoted to his work and a hugely successful traveling art exhibition composed of documents and artifacts from his archives.

The latest glimpse behind the curtain comes in the form of Gary Khammar’s feature-length documentary Kubrick Remembered, a superb piece of reportage that includes revealing interviews with Kubrick’s family members and collaborators (including Matthew Modine, Vincent D’Onofrio, Ryan O’Neal, and Eyes Wide Shut cinematographer Larry Smith) and corrects many of the prevalent misconceptions about Kubrick as both a man and a filmmaker. The documentary is one of several special features on a new Blu-ray boxed set, Stanley Kubrick: The Masterpiece Collection, that also features interviews with Kubrick admirers like Oliver Stone, Martin Scorsese, and Steven Soderbergh and collects eight of the director’s best films (basically everything from Lolita to Eyes Wide Shut, minus Spartacus). The bad news for Kubrick completists is that even if you have one of the earlier DVD or Blu-ray collections of the director’s work you’ll probably have to pick this one up for the new documentaries. The good news is…well, there are great new Kubrick documentaries.

On the eve of the collection’s release, I sat down with three of the actors from one of my favorite Kubrick films, Barry Lyndon, to ask about their work with the master and gain a little insight into his process. Ryan O’Neal played the title character and was a huge movie star at the time thanks to his roles in hits like Love Story and What’s Up, Doc?; Dominic Savage was a child actor who spent six months on location as the young Lord Bullingdon; and Leon Vitali played the adult Bullingdon and went on to form a lifelong friendship and working relationship with Kubrick, ultimately serving as the director’s assistant and casting director.

Vitali has continued his work even after Kubrick’s passing, overseeing the restoration of picture and sound elements for home video releases and supervising new stereo mixes of the director’s films for DVD. “Stanley only used stereo on 2001 and Eyes Wide Shut,” Vitali told me. “The others were all in mono.” When I asked why a noted innovator like Kubrick resisted mixing his films in stereo, Vitali explained, “We used to send people to all the key cities to check the projection, and what they found was that nearly all the sound systems in the theaters hadn’t been looked at for years or even decades. Often one or more channels weren’t working, so Stanley decided it was better to record it in mono and mix it meticulously so that it would sound correct even if some of the speakers weren’t working.”

Yet Kubrick’s obsessive control over the final product wasn’t the whole story, according to both Vitali and Savage. “He’s got this huge reputation for being a control freak, but when he found the right actor for the role he would just let them go and see what they brought to it,” said Vitali. Savage agreed: “He was always trying things out and experimenting. He would improvise, and then if something interesting came out of it he would push it further.” Contrary to his tyrannical, precise image, Vitali claims Kubrick never used storyboards or planned his shots ahead of time. “He would take lenses and a viewfinder and get on the set with the actors, and maybe a grip with some tape. You’d have to go through the scene 10, 15, 20, 30 times while he looked at every possibility with every lens and figured out his first shot. Then everything grew out of that first shot, including you.”

Kubrick’s approach of making the actors go through a scene over and over again before even getting to his legendary multiple takes could be trying, to say the least. “He shoots a lot of takes, and you don’t get a stand-in,” said O’Neal. “We shot for something like 350 days, and afterward they had to carry me away.” O’Neal claimed that the meticulous lighting added a whole other time-consuming level to the shoot, even though the film was famously lit almost entirely with available light in the form of candles. “The problem was that if we didn’t get the take we had to blow all the candles out and start with new ones,” he explained. “And the candles all had three wicks, that was our trick. So it wasn’t easy to blow them out!”

O’Neal laughed remembering Kubrick’s practical approach to the problems that arose during shooting. “I remember near the end when I had to lose a leg, and we had trouble finding an actor who would be a good double for me. At one point Stanley said, ‘Why don’t you just lose the leg? It’d be so much simpler.’” He noted that Kubrick always had his eye on the money and was a very conscientious producer. “I got a good salary,” O’Neal remembered, “because my deal was for 18 weeks and after 18 weeks we had about four pages. When Stanley found out how much I was making with overages he said ‘Shouldn’t you be outside unloading the trucks?’”

Vitali and Savage both began the film with much smaller parts than they ended up with, but Kubrick kept expanding their roles throughout production. The experience led to both men pursuing work on the other side of the camera as they got older. “That sense that he was unemotional or tough on people, I don’t understand that,” said Savage, whose interest in still photography was aggressively encouraged by Kubrick. “He was tough, but he was also incredibly kind and generous.” Vitali concurred: “He was so patient. He never shouted at the actors. Ever. But he was a force of nature. If he felt kind and in a generous mood and thought things were going well, he was almost as difficult to deal with as when he was in a bad mood, because he could be overly generous and overly kind. And if he saw something was wrong, he’d be incredibly angry. There was no middle ground.”

“It was very unique having that experience with Stanley. We were all crazy about him,” said O’Neal. “Whatever he wanted we would try to do.” O’Neal admitted that the shoot was “an ordeal,” however, and that he still can’t look at the movie objectively. “I didn’t see the movie for a year and a half. When I did, I didn’t know what I saw. I still don’t. Some people like it and some people fall asleep.” When asked if he was ultimately glad he went through the long, brutal production, O’Neal thought for a minute and then responded simply, “Yeah, I guess so. Otherwise I wouldn’t be here.” Ironically, O’Neal pointed out how much Kubrick would have hated him giving interviews like this one. “Stanley begged us never to talk about him,” the actor recalled. “But he was our god. He’s gone now…I didn’t think he would ever die, I thought he would live forever.” I wrapped up by asking O’Neal if the many great directors he had worked with – Stanley Kubrick, Peter Bogdanovich, Walter Hill, etc. – had anything in common. “Well, they’re all highly intelligent, and have good instincts,” he answered. “And if they don’t fall for the blonde on the picture they probably go on to have pretty good careers.”