“I Don’t Know If Camus Would Have Approved”: Five Questions for Far From Men Director David Oelhoffen 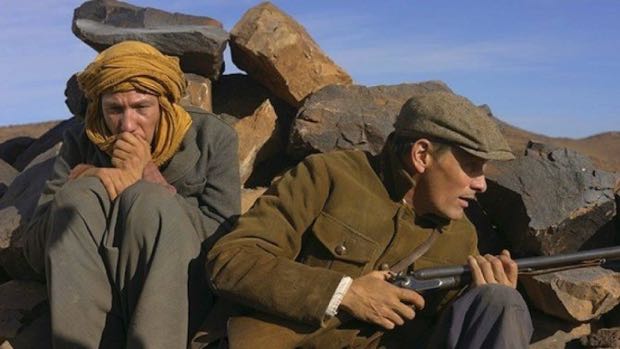 by Ariston Anderson
in Directing, Directors, Interviews
on Dec 23, 2014

David Oelhoffen’s latest film, Far From Men, is based on Albert Camus’ short story “The Guest.” Set during the Algerian War and shot in the manner of a Western, the film features a French and Arabic-speaking Viggo Mortensen as Daru, a schoolteacher in remote Algeria required, against his will, to transport murderous prisoner Mohamed (Reda Kateb) to meet his justice. The two men must confront their own morality and each other against a backdrop of the Atlas Mountains. The powerful film recently played at the Marrakech International Film Festival, near where the film was shot. Mortensen received a career tribute award for the occasion. Greeting local crowds in Arabic, announcing that he felt like he was coming home.

Oelhoffen will next shoot a film called Cargo, about a convey ship sailing from India to Africa, with an Indian crew and French officers. Cargo will be a political film about the lack of regulations in international trades; Oelhoffen describes it as a modern-day The Wages of Fear. We caught up with the director in Marrakech to discuss the overwhelming task of adapting Camus, possible controversy surrounding the film, and why it’s important to develop a film’s characters in conjunction with its actors.

Filmmaker Magazine: Was it scary to adapt Camus?

David Oelhoffen: Obviously it’s scary to adapt Camus. By chance, it’s a short story, so I had to extend it, adapt it. I used a lot Camus’ texts as a journalist, as well as another text called Algerian Chronicles, which he wrote in the ’30s when he traveled to Kabylia. It’s an amazing text where he described the end of the colonization system in the ’30s. I used a lot of these texts to expand his short story. I don’t know if Camus would have approved of the film. I hope so. At least his daughter, Catherine Camus saw the film and said she liked it very much.

Filmmaker: Do you think that people today can learn from the themes of the film?

Filmmaker: Have you experienced any controversy concerning the subject of the film?

Oelhoffen: Not so far, but the film will be released in France in January, so I will see. It was not my goal to raise controversy, on the contrary. If it’s the case, it’s not a problem. I think everybody now knows the French army did terrible things in Algeria. There are some people in France, especially in southern France, saying we should write in the books that the colonization was a good thing. People still think it was a good moment for France and that we should teach our children that it was a very positive moment for France and North Africa. Perhaps for these people the film will raise controversy, but it’s not a problem for me. It’s not my goal. I think it’s a film about two men, and about how difficult it is to really know another person and the difficulty of fraternity. It’s a big world and a nice world, but the story shows how difficult fraternity is in real life, in real situations.

Filmmaker: The cinematography is very striking in this film. What kind of look were you going for?

Oelhoffen: For me, Far from Men is a Western-like movie, so we tried to shoot it as a Western. I would have loved to shoot the film in Algeria, but it was not possible. So we went on the other side of the border, but it’s the same mountain chain. I tried to find the same kind of landscape I saw in Algeria. I traveled a lot in Algeria. It helped me choose the landscape in Morocco, and afterwards we shot towards the west, against the sun. You say the photography is really nice, but for me it was not the goal. It was important to shoot nature as it is, huge, because people feel very small against such a huge landscape. I think it’s a way to emphasize the absurdity of the journey, the absurdity of the war.

Filmmaker: What did you learn working with Viggo Mortensen?

Oelhoffen: I like to give space to the actors. I learned a lot because I had the opportunity to see how he worked. Viggo is amazing. He’s a very hard worker. He prepares himself a lot and for me it was a chance, a gift, because we really prepared the character together. It was not just me directing Viggo, saying “Daru is like this, Daru is like that.” I think I will try to do the same for the next films.