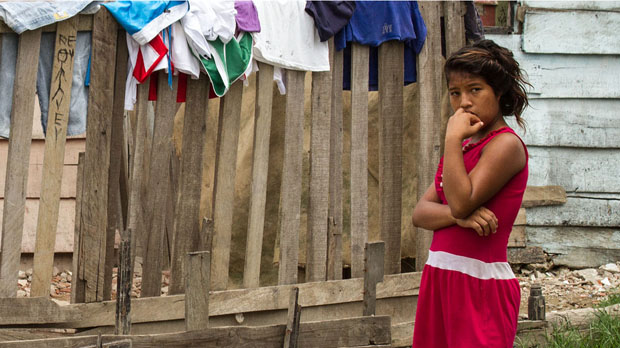 by Randy Astle
in Directors, Filmmaking, Interviews
on Feb 2, 2015

Two years ago a team surrounding journalists Sheryl WuDunn and Nicholas Kristof and producer Maro Chermayeff released a four-hour documentary and multimedia project called Half the Sky, a companion to WuDunn’s and Kristof’s book of the same name. It dealt with basic human rights issues for women, focusing on topics like women’s healthcare, domestic violence and rape, and girls’ education in countries like Sierra Leone, Afghanistan, Somaliland, and Cambodia, and I wrote a piece for Filmmaker about its transmedia components and outreach efforts.

Late last year WuDunn and Kristof released their follow-up book, A Path Appears, shifting their focus from women in extreme poverty to global poverty on a broader scale–including in the U.S.–and potential solutions to alleviate it. They again collaborated with Chermayoff on a filmed version, and the resulting piece consists of three 90-minute documentaries, the first of which aired on Independent Lens last Monday night, with parts two and three screening today, February 2 and then on February 9. More information and the film’s trailer is available on its website, and reviews like Indiewire‘s, have been positive.

Chermayeff talked with me about the films’ production process and how the filmmakers are reaching out, again, to maximize its real-world impact.

Filmmaker: It’s been a little over two years since Half the Sky was released. Do we have any way of knowing what components of that project had the most effect in actually helping women?

Chermayeff: Half the Sky was a true multi-platform project: a four-hour television series, a Facebook game (with in excess of a million players globally), three mobile games for India and Africa, an educational outreach and engagement strategy, over 1,500 campus and community ambassadors and and a robust social media engagement plan with over 2 billion impressions on the content. The series was extremely well received both in the U.S. and around the world, with some 18 million viewers as well as the Facebook game, which triggered real-world actions including book donations and fistula surgeries that we know actually changed lives. [The producers created a Project Impact Report that breaks down these and other successes. It includes statistics such as that over 5 million viewers watched the television broadcasts, as well as discussing the work of the “ambassadors,” who each committed to spend five hours per month–a potential total of 12,500 hours–working on outreach and promoting women’s issues.]

Filmmaker: Since it’s a sequel of sorts, how does A Path Appears differ from Half the Sky?

Chermayeff: A Path Appears differs from Half the Sky in many ways. The geographic focus is not limited to the global south, and both the book A Path Appears and the series tell stories based here in the U.S. and in Latin America as well as the Caribbean. Additionally, the book A Path Appears does not solely focus on women, though it acknowledges that with global poverty and lack of access to education women and girls are most often hit the hardest. However, men and boys are certainly struggling, and are certainly part of the dialogue and must be to make social change. Lastly, but very importantly, Kristof and WuDunn were emphasizing solutions, innovative ways to make a difference, and that is the core focus of this newest round of content.

Filmmaker: There’s a lot of ground to cover there. Why did you go with three films/episodes this time around? Can you talk a bit about each one individually?

Chermayeff: In discussion with PBS programming, we all felt it was a better decision to air the series over several weeks instead of a two-night event as we had broadcast Half the Sky. We knew each of the the nights would be thematically driven and story driven. Ultimately, we also believed that 90 minutes was the right amount of time to embed in these tough issues and stories, as two hours was an emotionally rigorous experience for the viewer for this subject matter.

Night One is centrally focused on one issue, Sex Trafficking in the US, but reported from different locations and in three different ways :

1) How young girls are brought into the life

3) Survivor care and next steps–looking at how survivors can be supported, learn skills and be provided next steps.

Night Two is subtitled “Breaking the Cycle of Poverty” and travels to West Virginia, looking at poverty and early childhood education; Haiti, covering child domestic slavery and access to education; and Colombia for a story on teen pregnancy.

Night Three is subtitled “Violence and Solutions” and looks at domestic violence in Atlanta and an innovative, holistic community-based program to break the cycles of violence and poverty in Kibera, Kenya.

Filmmaker: Obviously that’s a lot of locations, implying a fairly long production process. What was the shoot like? How different or similar were the situations you profiled in each of those countries?

Chermayeff: Every country in the world presents different challenges for filming. Here in the U.S. access can be the most difficult, and in the case of A Path Appears, many of our shoots took place during brutal winter storms. But, we wanted to show that poverty has striking similarities all over the world–and poverty in Haiti or Africa can be more like poverty in West Virginia than you can imagine.

In foreign countries we worked less with the police and local law enforcement and more directly with NGOs on the ground doing independently supported interventions. Sadly, the legal systems in both Kenya and Haiti are deeply challenging and often riddled with corruption.

Filmmaker: Can you talk about the roll-out of the film? There are public screenings and discussions already announced on the website; are there also transmedia elements, games, or other media in the works?

Chermayeff: The series is being rolled out on national PBS across the country on Jan. 26, Feb. 2, and Feb. 9th 2015. Our international distributor FremantleMedia will begin International roll out in March of 2015.

In partnership with ITVS and Women and Girls Lead we have created seven educational curriculum modules and associated lesson plans. We will be bringing a one-hour version of the series around the country (to some 100+venues, schools and libraries) through ITVS Community Cinema. Additionally we have a large engagement strategy through social media, screening events, online and through our website and our NGO partners.

We have a DVD of the series launching on PBS Digital in March (available for purchase now).

On www.apathappears.org you can learn more and watch extensive short video pieces that deal further with these critical issues.

The Random House book A Path Appears is available in bookstores and online.

Filmmaker: What advice would you give filmmakers or transmedia producers seeking to galvanize social change? How can they make sure their project has the greatest impact?

Chermayeff: To make a social issue film launch to its greatest success is a long and in-depth process requiring a detailed strategy. It takes a lot of work to break through the clutter of the present media environment.

We begin about six months in advance–launching short video clips and visual content and graphics. We engage and build on our strategic partnerships with our NGO partner organizations and our corporate and foundation funders, as well as with PBS/ITVS and their active audiences.

We work with influencers, and government organizations and law enforcement both in the space of the issue (sex trafficking, domestic violence, etc.) and, in the case of Half the Sky and A Path Appears, with celebrity actor advocates. We have found that the actor advocates we work with, as well as the luminary or experts we interview (combined in the two films some 50+ people) have made an enormous difference in getting the word out.

Our partner Nicholas Kristof is also extremely influential in this space, with his biweekly New York Times column and existing audience from his best-selling books and influential speaking engagements. He has helped shine a light onto diverse subject matter for many years now, so our movement has built off of his and his wife Sheryl WuDunn’s existing base of supporters.