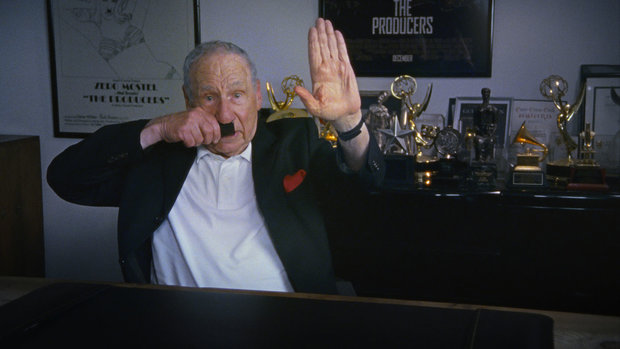 Originally published during the Tribeca Film Festival, where the doc on humor and the Holocaust had its premiere, here is Paula Bernstein’s interview with director Ferne Pearlstein about The Last Laugh. The film is opening in theaters today and plays in New York at the Lincoln Plaza Cinemas.

There has been no shortage of documentaries about the Holocaust but, until now, none of them have featured Sarah Silverman, Chris Rock and Louis C.K. In Ferne Pearlstein’s The Last Laugh, which premieres today at the Tribeca Film Festival, she delves into the history of humor about the Holocaust, exploring the ethical questions of of mining such dark material for laughs. Included are film clips, performances, interviews with comedians a portrait of a Holocaust survivor, and even archival footage of cabarets in concentration camps.

Given its extensive use of archival material, 16mm was, perhaps, a natural choice for Pearlstein — whose previous credits include Sumo East and West, Imelda — when it came to her choice of format. Filmmaker talked to Pearlstein why she chose to shoot her doc on 16mm, what it’s like serving as your own DP and editor, and more.

Filmmaker: Why did you decide to shoot The Last Laugh in 16mm? Was it for aesthetic or practical purposes?

Pearlstein: Shooting in film was definitely not for practical purposes. I do own my own 16mm camera. But on my first shoot, when I went to rent my Super 16mm magazines as I had done many many times before, I quickly learned that there was so little demand for these mags that the rental house had taken them all apart for parts. At the eleventh hour I had to purchase four higher-end magazines from Aaton (in France!) just to have them downgrade them so we were able to work with my camera.

So shooting in film was definitely an aesthetic choice. But as a DP, it is how I enjoy shooting a film. And as a director, I thrive on the challenge of working within the confines of a limited number of 10-minute rolls. It’s my way of thinking through the process and mapping out the film, while not overshooting, which is a risk shooting digitally.

Filmmaker: Did shooting on film create any obstacles or difficulties for you during the shoot?

Pearlstein: There were definitely obstacles, which looking back were almost humorous. The infrastructure for Super 16mm was collapsing all around us. In the years we were shooting (2011-2015), Kodak filed for Chapter 11, [FilmLab] closed, leaving no labs in NYC, the equipment houses had fewer and fewer people who knew about servicing motion picture film gear, and there were fewer and fewer camera assistants who had worked with film that were available on a moment’s notice.

Filmmaker: What are the benefits and drawbacks of serving as your own DP and editor?

Pearlstein: For me, it’s the way I feel most comfortable working, especially since this was such a passion project for me. There’s this belief that if you’ve directed and/or shot your own film you won’t have the perspective to edit it. I understand that premise in theory, but that’s why I work so hard to have consultants and trusted friends around me to make sure I have that outside perspective that’s desperately needed.

Filmmaker: We’ve seen so many documentary films about the Holocaust, but, of course, this one takes a very different approach to the topic. What motivated you to focus on the humor of the Holocaust?

Pearlstein: I wasn’t necessarily looking to make a film about the Holocaust, and/or finding a new way into the subject. An old friend of mine, Kent Kirshenbaum, wrote a 40-page paper on the topic, “The Last Laugh: Humor and the Holocaust,” while he was in school getting his Ph.D spurred on by an experience we shared speaking to an elderly survivor about Art Spiegelman’s Maus. He presented the finished paper to me in 1993 while I was in documentary film school at Stanford and said, “Make this into the film!” I wrote my first proposal in 1998 after meeting my husband and producing partner, Robert Edwards, right as Life Is Beautiful came out. It was clear right away, after the strong reactions to that film, that it would serve us better to wait to make our film because Life Is Beautiful was such a seminal part of our discussion that we felt it needed to settle before we tackled this difficult topic. It wasn’t until I saw the documentary The Aristocrats in 2005, and where I saw the first jokes about 9/11, that I felt people were ready to see my film. And we worked to get money from then on, until one very special donor finally came in in the summer of 2011.

Filmmaker: How close is the final film to your initial vision of what it would be?

Pearlstein: Very close. I had a strong sense of what I wanted before I started shooting and we set out to shoot material to fit that vision. Partially that was the result of spending so much time — years, really — thinking about the project and writing outlines and proposals before we ever began production. And I was very adamant that I didn’t want this to just be a talking heads-and-clips film. I always wanted to interweave a cinema verite thread (which turned out to be a portrait of an Auschwitz survivor) with interviews and archival which function sort of like a Greek chorus. On paper that worked fine, but in practice it was much harder to strike the right balance. So the real challenge was weaving those two stylistic threads together and making them feel like one seamless film. Another challenge was staying within that vision while keeping up with current events. With each new shoot, year after year, more taboos were being broken: from rape jokes by Daniel Tosh, to jokes about Bill Cosby, to Charlie Hebdo, to the arrest of the anti-Semitic French comic Dieudonne in the wake of those attacks in Paris.

With The Last Laugh, I hope to provoke debate and discussion; to introduce these issues and stimulate a serious conversation about freedom of speech, our collective memory, and how to remember the past while keeping it vibrant.