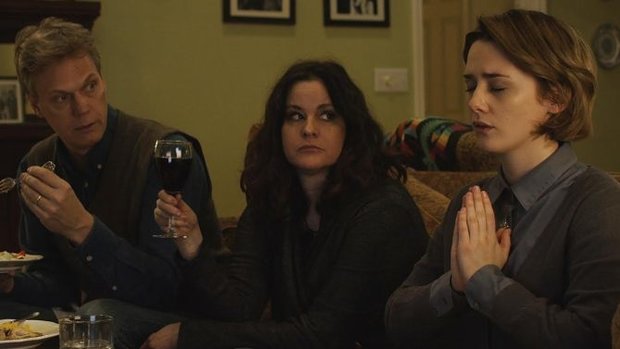 In Zach Clark’s Little Sister, Colleen (Addison Timlin), a former goth girl turned nun, returns home to her dysfunctional family for the first time in years after learning that her brother Jacob (Keith Poulson) is back from fighting the war in Iraq. To cope with her passive father, Bill (Peter Hedges), her bipolar, pot-smoking mother, Joani (Ally Sheedy), and her depressed, disfigured brother, Colleen resurrects her goth persona in hopes of livening things up.

Set in 2008, against the backdrop of President Obama’s election, the dark family comedy manages to be both tender and pointed.

In a review of the film in Filmmaker, Howard Feinstein called Little Sister “an unaffected masterpiece,” writing that “Clark balances the melancholy with outsized bursts of joy.” Filmmaker‘s Scott Macaulay declared Little Sister his favorite film out of SXSW, when it premiered earlier this year.

With Little Sister now playing on digital platforms (iTunes, Amazon, Vimeo) and select theaters around the country, including, this weekend, L.A.’s Arena Cinema, we reached out to Clark to ask him about drawing his characters from his real life, the distribution process, his favorite movie nuns, and more.

Filmmaker: Little Sister is your fifth feature. Has it gotten any easier to raise money for your films? Are you slowly moving to working with bigger budgets? Is that the goal?

Zach Clark: I wouldn’t say “easier,” but each movie has had its own unique path to financing that has felt increasingly more “official.” Hopefully, they keep getting a little more expensive and reaching a slightly larger audience than the previous one, which feels like the trajectory so far. I’d like to keep making strange, sad, personal films, and taking that process step-by-step makes a lot of sense to me. We’ll see how the next one goes!

Filmmaker: You’ve said that your previous film, White Reindeer, was autobiographical even though you hadn’t done anything any of the characters do in that film. Would you say the same is true for Little Sister?

Clark: One hundred percent, and this time around my producer and creative life partner Melodie Sisk was generous enough to let me steal liberally from her life as well. We put our respective familial histories in a blender and that became the emotional backbone of Little Sister. I have a sister named Colleen, a brother named Jacob, a dad named Bill, and a mom named Joani. Melodie’s stepdad’s last name is Lunsford. We shot most of the movie in her parents’ house. No character is a verbatim representation of their namesakes, but every emotional beat in the movie has a real-life resonance for myself or Melodie.

Filmmaker: How did you manage to create the prosthetic makeup for Keith Poulson on a budget? Any DIY tips you can share?

Clark: Brian Spears and Peter Gerner pulled off those prosthetics, and beyond emphatically recommending hiring them, I’ll add that making a low-budget movie isn’t about spending less money on everything but about spending money more selectively. The prosthetic make-up needed to be executed beautifully for the movie to work, and we allowed for that when we were working on the budget.

Filmmaker: Little Sister is the first film being distributed by Joe Swanberg’s Forager Films. Did you get other offers for distribution? Why did you opt to go with Forager?

Clark: Forager were our executive producers on the film, and we couldn’t have done it without their involvement. We did have some other interest, but we also got a lot of passes from pretty much every major indie distributor. We took a look at the offers and the numbers, and it made the most sense for us to handle our own distribution in theaters and on demand. As a result of some licensing we’ve already secured, the movie is already financially profitable, so it’s exciting to be diving into distribution as both a means of sharing the movie with the public, but also a learning experience that many filmmakers aren’t lucky enough to have.

Filmmaker: The film is set in the not-so-distant past of 2008. What were some of the challenges of making a “period piece” in the recent past? Is there a touch of nostalgia for eight years ago?

Clark: Our costume designer, David Withrow, was a real stickler for what was and wasn’t in fashion in 2008, and I think his work is the most meticulous in terms of selling the period. Beyond that, it was a lot of double-checking to make sure certain props or products would’ve existed in the period. I took it pretty seriously. The news reports they watch on TV are almost verbatim recreations of the look and feel of Asheville, NC local news from the era. Website design was also pretty important for the period vibe. In exterior shots, we tried to keep out-of-period cars to a minimum, but that’s probably where we were the most lax with the period setting.

Eight years ago feels so quaint compared to our current political climate. When I was writing and making the movie, I thought of it as barely a period movie, but I think the insanity of our current situation has actually enhanced that element of the film beyond my control.

Filmmaker: From The Nun Story to The Sound of Music to Agnes of God, Ida, and beyond, nuns have fascinated filmmakers. Why do you think that’s the case? What was your attraction to telling the story of this particular nun? And who is your favorite movie nun?

Clark: My mother is an Episcopal priest, my sister works for Meals on Wheels, and my girlfriend is a nurse who works with cancer patients, so the most important women in life have all devoted their lives to incredibly selfless professions. And I’ve always been interested in characters in uniform, so that also has something to do with it, I’m sure. Kathleen Byron’s Sister Ruth from Black Narcissus is probably my favorite nun in cinema history, and that movie in general is a flawless masterpiece. All of our pitch material, however, featured a still of Audrey Hepburn from The Nun’s Story photoshopped so she was wearing black lipstick.