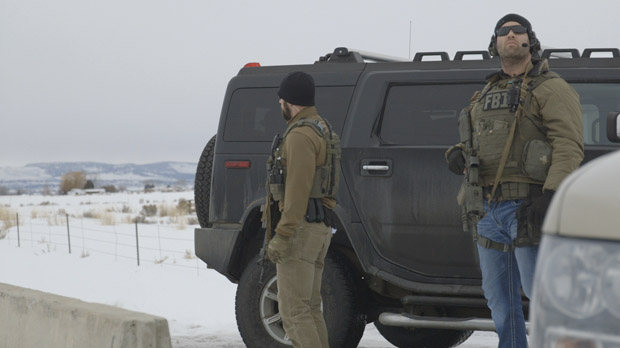 Documentary filmmaker David Byars had either the luck or the foresight that every first-time director envies. He had been following the patriot movement — a loose collection of rural conservatives who resent the federal government’s authority over issues like public lands — for years, focusing on emerging leaders of Cliven Bundy and his sons Ammon and Ryan and trying to piece together a story that would make a compelling film. So when the younger Bundys led an armed group of demonstrators to occupy the Malheur National Wildlife Refuge in Harney County, Oregon last year, Byars was prepared: he had the knowledge and the relationships to allow him to immediately jump in and start filming. Unlike previous encounters between the protesters and the government he knew the stakes in this situation would drive the confrontation to head — a story with a beginning, middle, and end. All he had to do was document it.

The resultant film, No Man’s Land — which Byars directed, produced, and, as he mentions below, shot himself — premiered last week at the Tribeca Film Festival. In our conversation Byars credits his editor and fellow producer David Osit with helping shape the narrative, and other co-producers like Morgan Spurlock, who Byars enticed onto the project during a quick trip away from the occupied refuge to the Sundance Film Festival, helped in shaping it as well, but the film is really a result of Byars’ vision and, most importantly, his best decision: to focus primarily on the occupiers and seek to understand their position. No Man’s Land thus follows the best tradition of Griersonian, observational and verité documentary by taking the time to show its subjects as real people and really getting to know them and understand their perspective, which most likely differs widely from that of the average Tribeca attendee.

There are no surprises about how the narrative turns out for anyone with even a cursory knowledge of the news, but the beauty of the film is that process of getting there is still riveting. It goes beyond stereotypes and soundbites to see into the hearts and minds of a group of people often misunderstood by the majority of Americans. That in and of itself is fascinating, but if it also helps us see across the United States’ current cultural divide, then even better. No Man’s Land is an auspicious beginning for a first-time feature filmmaker, and I talked with Byars about his process and how the film relates to the country’s current political situation.

Filmmaker: The occupation of the refuge took Americans by surprise. At what point did you realize this should be documented and how quickly were you able to put a crew together and get to the site?

Byars: Prior to the beginning of the occupation I’d been following land rights conflicts for a few years and making a film about it mostly as a side project; there had been several minor incidents with frustration over federal land management, notably the standoff near the Bundy Ranch in 2014 that was essentially the first shots fired in this battle against the Bureau of Land Management. So while none of us expected such a momentous standoff, there were inklings that things were getting more tense, especially as the movement had found a leader in the charismatic Bundy family who seemed undefeatable to their growing number of adherents.

When Bundy took over Malheur I recognized right away that this was the apogee of the conflict — they were precipitating a conflict to which the federal government would have to respond. Although I didn’t know what shape the narrative would take, I knew that there would have to be an end to this occupation. I very quickly got out to Oregon and begged a camera from a reporter that I met there. Eventually, I was able to get a fuller kit and a producer (Stash Wislocki) flew to Oregon to support the project, but for the majority of the occupation, I was there by myself.

Filmmaker: What kind of issues did you have gaining access — and trust — with the occupiers, the local community, and the federal and local government officials? What was your process like in that regard?

Byars: Gaining access to the occupiers in a general sense was a bit of a slow process. I knew several of them, having been researching the project for a couple of years, but they were mistrustful of the media in general, who were filing nightly reports with the most outrageous soundbites they could tease from the occupiers. I also made a point to spend a lot of time with the occupiers away from my camera. I wanted them to understand that I was genuinely interested in the human story and their motivations, rather than sensationalizing or lampooning them, so I think they appreciated that I wasn’t there to cast aspersions on them but to get to know them. It was a mixed bag though — some people were happy to share their reasons for being there with me, while some threatened to shoot me if I even filmed their face by accident. It was a strange and unprecedented carnival of motivations and rage and it was unnerving to be there as it devolved. As for the townspeople and law enforcement, I was really embedded with the occupation and I didn’t want to lose that — I spent far more time with the militia than with anyone else as that felt like the unfolding story to me.

Filmmaker: This was your world premiere at the Tribeca Film Festival. Can you talk about your relationship with the Tribeca Film Institute and how it helped incubate the project throughout 2016? You also went through the IFP Spotlight on Documentaries program; how did that help you, and were there any other funds, institutes, or retreats that helped you put the package together and form the finished film?

Byars: TFI has been so supportive and was one of the first grantors to the film. As a first-time filmmaker you’re grateful to anyone who acknowledges that you’ve got a project people believe in, but especially a program with such a strong pedigree and a list of wonderful films every year. IFP Spotlight on Documentaries was great for similar reasons — it’s literal facetime with decision makers, funders and festivals who aren’t available to you without a resumé of past films and festivals under your belt. I’m also of course extremely thankful to our co-production company, Warrior Poets, and all the other organizations that helped make No Man’s Land — Topic, Impact Partners and Filmmaker Fund were instrumental in the film’s funding. Mountainfilm and Telluride Arts gave us grants very very early in the process that allowed me to incubate the film pre-occupation, and the Camden Points North TFI Retreat is where I truly started to learn how to discuss the film and figure out what it could become in postproduction.

Filmmaker: At its core this is a story about (at least) two different visions for America that we saw explode to a far greater scale with the presidential election ten months later. This brings up two pertinent questions: First, on a very practical level, while you were essentially embedded with the occupiers what was your approach in dealing with them and representing their views, both literally while you were in production and thematically when you were editing the footage and finalizing the film?

Byars: During production I was desperate to film as much as I could and get as much access as I could, and to distinguish myself from the other media there, and I thankfully managed to accomplish that as the occupation came close to an end. I tried to maintain a respectful air with everyone I spoke to — I’m a white guy from Georgia, and I tried to lean on southern kindness as a tool of disarmament. But there were so many opinions and reasons for people to be there it would have been disingenuous to paint everyone with a broad brush — they were united in far fewer things than divided them, but the one thing that truly united everyone was their dissatisfaction with how the version of the America that they hold in their mind is manifesting itself today.

The editing process is where the film truly came alive in depicting all this, as I realized how complicated the story and motivations were. Our editor/producer David Osit worked with our story consultant Lana Wilson to bring interviews into the film with occupiers, townspeople, and journalists who were present at the standoff — it provided a narrative spine to the film that allowed us to not just explore the complexity of the standoff, but comment on it. It also allowed us to walk a tightrope of letting people speak for themselves and allowing countervailing viewpoints to exist simultaneously in the film, which was so important to me: that the audience not be led to any conclusions about these men but be presented with all the facts and all the information, which is increasingly rare in our news-as-entertainment discourse and certainly was a main crisis of the 2016 election.

Filmmaker: And second, on a broader scale, what do you think the events at Malheur say about the state of our country and society today?

Byars: If you went to Malheur in January 2016, you’d be greeted by a charismatic cowboy who would walk up to you with a smile and a handshake and tell you that things could be better in your life. And enough people around him believed him, so you’d believe him too. And you’d start to change, and maybe you’d forget where your bread is buttered because you finally have some power.

History is full of men like this, leaders who tap into the smallest and weakest part of all of us and tell us that our fears are real and that they have all of the answers. This clearly isn’t on the verge of changing, but I think the film shows us how this isn’t a nation of two opposing sides, good and bad, as much as its a nation of millions of people who are prone to falling for narratives that, at best, have a tenuous connection with reality. I’d like to think No Man’s Land offers some insight into the way we can all be corrupted, so that we can recognize it better when it inevitably starts to happen again.