by Lauren Wissot
in Directing, Directors, Filmmaking, Interviews
on Nov 8, 2011

Since I spend part of my year in Amsterdam I’m always on the lookout for interesting Dutch folks to write about. Kinetic artist Christiaan Zwanikken fit the bill and then some. Zwanikken lives most months at his family’s retreat in Portugal, which was once a monastery but now serves as the laboratory for his Frankenstein creations, robots crafted from servomotors and the remains of wildlife he finds on the ancient grounds. American filmmaker Jarred Alterman is also fascinated by Zwanikken’s work – so much so that he crafted Convento, an “art/doc” that follows not just the Dutch artist and his creatures but the Zwanikken clan, including mom Geraldine, a former prima ballerina. I spoke with the passionate director prior to the film’s NYC opening — appropriately enough, at the American Museum of Natural History on November 11. Zwanikken’s sculpture show at the museum opens a day earlier.

Filmmaker: So over the summer I convinced you and Christiaan to interview each other for Amsterdam Magazine, yet I never learned how you two met in the first place. What made you decide to cast Christiaan and his family (including his robots) as the subjects of a doc? 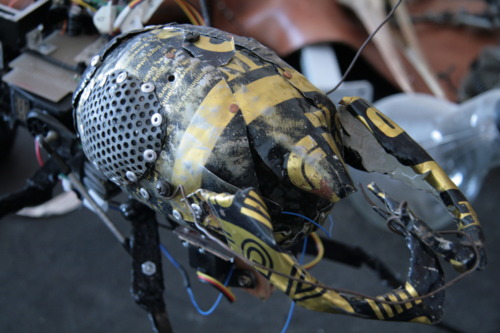 Jarred Alterman: I was traveling in Portugal with friends when a small ad in Lonely Planet caught our attention. There was more mystery in the description than actual substance – something about a monastery and artists in a remote village. It sounded intriguing so we left the coast and headed into the countryside. Little did I know this chance encounter would be the focus of my first feature.

I ended up staying at this former-monastery-turned-artist-retreat for two weeks and developed an intense friendship with the Zwanikken family. (Late night dinner discussions about alien abductions fueled by red wine brought us all a little closer.) I also spent a lot of time with Christiaan in his studio and we began collaborating on short films, primarily experimenting with ways to best capture his kinetic sculptures. I was not thinking about a documentary at this time, I was thinking about creating micro-narratives for these incredible robotic creatures and creating video installations together. The piece that came out of this experimentation was “MINAS” (or how a dead hare explains pictures), which was invited to Art Amsterdam the following year. This is a robotic hare’s head that communicates to a short film loop of aliens at a former copper mine.

After developing this friendship with Chris and his family I later had the idea of returning to Portugal to make an unconventional documentary (with more art, less information). I think of Convento as an extension of our collaborative relationship as artists.

Filmmaker: I know you’ve worked on several films for The Merce Cunningham Dance Company – and that Christaan’s mom was once a prima ballerina with the national company in Holland – so I wonder if you could talk a bit about movement. I noticed your cinematography seems to share the rhythm of Christiaan’s kinetic artwork. How do dance projects differ from other forms of documentary filmmaking?

Alterman: For the past 10 years I have had the privilege of working as a cinematographer for the artist and filmmaker Charles Atlas on several Merce Cunningham dance films, including Views, Split Sides and Ocean. I loved the way we captured the movement of avant-garde dance choreography with a motion picture camera. The dance was extremely difficult to learn as a camera operator because of the counterintuitive nature or “chance” structure of the choreography. I especially loved what the moving camera could achieve by following dancers across the floor. It felt like we were transporting the viewer into the dance. I think the most important element of any film is the ability to transport an audience through time and space.

Geraldine Zwanikken was a former ballerina with the Dutch National Ballet Company and later an avant-garde choreographer and dancer. We certainly had an immediate connection through dance and this really helped with an unspoken bond between us. I wanted to bring my love for dance into the visual storytelling of Convento because a major theme of the film is to capture the choreography of daily routines of a family, cross cutting between a mother in the garden, her son tending to the animals and her other son working in his studio – all in the same location. The movement of Convento is similar to a dance because with very little dialogue these daily routines become a meditation. 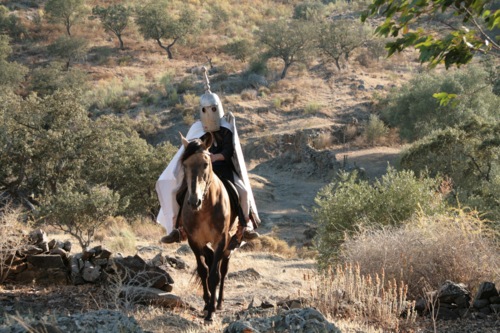 Filmmaker: I was also lucky enough to catch Christiaan’s exhibit at the Edinburgh International Film Festival. Up close his robots are alternately morbid and delightfully playful. Kind of an Edward Gorey feel. But what most surprised me was the intricately layered sound design. Was that difficult to capture on film?

Alterman: Sound was equally important as vision in Convento. Christiaan’s sculptures have both mechanical sounds and intricate sound sequences that truly give the creatures their souls. I noticed early on while filming the more mechanically driven pieces like “Put Your Heads Together” (two goat skulls who taunt and tease one another) that it was very difficult to translate that into the cinematic experience. They were shocking in person, but fell flat on the silver screen. So because I had Christiaan’s enthusiasm and trust he allowed me to foley some of the skull cracks and engine sounds in order to give it more life on the screen. And what really brought it all together was the brilliant score of my composer Lawrence Dolan who did not put a blanket over any scene, but instead created the perfect tension of each skeletal hybrid in nature sometimes using very sparse musical notation.

Even though it was a very long process to align all of these elements in the edit it was so much fun. I never felt like I was making just a documentation of his art. We were treating these objects as characters in a movie!

Filmmaker: Also, you mentioned that you’re currently working on another “art/doc.” Do you see yourself sticking firmly in this realm or will you eventually try your hand at, say, narrative features?

Alterman: I’m actually currently working on two projects. The first is a co-directorial effort with Paul Sturtz (the co-founder of the True/False Film Festival) about the destruction of an old hotel in downtown Columbia, Missouri. We have invited artists, musicians and writers from around the globe to create a living, breathing installation/art happening in the hotel before it’s demolished. It’s a mix of documentary and narrative, drawing references from “Sympathy for the Devil” and live Spalding Gray monologues.

The next project is a departure from documentary all together – a science fiction/art film in collaboration with Christiaan that will take place in New York and Portugal. I am very happy to leave the nonfiction genre for this next project – it’s been building up inside me for quite a while. We are currently finishing up the script, but I promise it will be Jim Henson meets Ridley Scott. (My pitch! We are currently seeking funding, so if you like the visuals in Convento I promise you this will be worth the investment.)

Filmmaker: Speaking of funding, I was recently discussing the music business model of putting on an event, as opposed to just selling a song, with a young director. I really think that’s the wave of the future for indie filmmaking. The fact that Convento usually screens in conjunction with an exhibit of Christiaan’s robots is not only fun, it’s a way to rope in the art folks along with the cinephiles. Was this a business decision for you, an artistic one, both?

Alterman: I always had the idea of bringing Convento into art galleries and museums in order to attract both the film crowd and the art world. This decision was not motivated as a business decision. It was the natural backdrop for a film like this. Convento is not a typical documentary. It uses visual storytelling to introduce the world of this artist and his family instead of a series of sit down interviews.

I always hoped we would bring sketches, sculptures and sounds from Portugal to a space when we showed the film, but not in my wildest dreams did I imagine what we have produced for the festival tour. At both the Edinburgh International Film Festival and Rooftop Films’ Old American Can Factory we created unique pop-up exhibits of a large selection of interactive kinetic sculptures. Audiences really appreciate the immersive quality of these events and now (coming up on November 10-14th) we have been invited to the American Museum of Natural History, part of the 35th annual Margaret Mead Film Festival.

Christiaan is bringing a whole new collection of work for his first solo show in New York City. As a child this museum was the beginning of my imagination and now I’m returning to the great halls of prehistoric beasts with my first feature. And I get to celebrate my birthday with the dinosaurs!