The Flaming Lips’ Christmas On Mars

by Jason Guerrasio
in Directing, Filmmaking
on Dec 1, 2008

How couldn’t you be existential in space? Cut off from Mother Earth, becoming a machine of sorts with only memories of holidays to pass the time? In the lovably lo-fi sci-fi Christmas On Mars, psych rock band The Flaming Lips have invented a straight-to-DVD film that could be a lost cousin to 2001, but born on the other end of the budget universe. Stuck on Mars with the gravity control device and the oxygen supply failing, a group of young colonists try to fix their space home, while battling hallucinations of babies. Part of the space colony also houses a white, antiseptic room where a woman is undergoing futuristic experiments to give birth without the child actually having to grow inside her. Lead character Major Syrtis (the Lips’ Steven Drozd) is especially sad about being on Mars and tries to recreate Christmas with all the dressings. (Look, sooner or later you are going to have emo-kids in space — it can’t be all about scientists and space-age researchers.) Things get worse when the guy he recruits to play Santa goes bonkers and experiences visions of a (I don’t want to ruin it for you, its quite neat)-headed marching band and runs outside without a spacesuit. Just when it all looks doomed for the crew, it’s the Lips’ head honcho Wayne Coyne who shows up as a silent Martian to save the day. 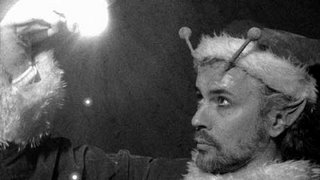 I’m an outside fan of the Flaming Lips, but, as a fan of many other recent artistic sci-film films made within tight budgets, I really enjoyed the film. It borrows from the garage as much as the laboratory, and is able to be slotted alongside Jim Finn’s Interkosmos and Cory McAbee’s The American Astronaut. All are nicely lo-fi with great atmosphere, endearing acting and soundtracks by musicians exploring the limits of their genres. I wish Eastwood and Lucas would make movies like this, with low budgets by choice, without recognizable actors, in B&W 16mm, forcing themselves to struggle and push the limits. Then it becomes the story and the atmosphere that are the champions.

Coyne wrote the film and directed it, with big help from co-directors Bradley Beesley (also the DP) and George Salisbury (who also FX and edited), plus great cameos by Fred Armisen and Adam Goldberg.

Talking on a space age cellular telephone, Coyne revealed, “I mostly made it for the Flaming Lips fans. But those fans are already being bludgeoned by a lot of film-looking things from the Lips. There is big visual content in our shows, and I think the fans expected [I’d do a film one day]. ‘Of course Wayne made a movie. He has a parade, some day he will have a candy bar, there will be Flaming Lips furniture….’”

Coyne is more a fan of art-damaged films than low-budget cult pics. And while you aren’t going to get Kubrick or Tarkovsky deep space meanings in Christmas on Mars, there are touches of those artistes. “I love Ed Wood as a man,” Coyne said. “But I wouldn’t watch his stuff. I’m not trying to be kitschy, [although] I am kitschy in it. It does resemble B-movie things but that wasn’t the intention.”

Indeed, the film has more existentialism on purpose than accidental ambience. “I’ll take that as a compliment,” Coyne said with a laugh. “I think some kind of bleak isolation left over from my childhood in Oklahoma seeped into this. I don’t know if you are feeding off your subconscious, but there are things about making movies that you cannot justify or understand. I like stories and I like intense things, but sometimes in movies you get to have these strange little moments that speak to an internal language of what I’m trying to say. It’s not done with words — it’s done by ‘being.’ I was hoping for those moments to happen…”

Coyne admits to thinking out scenes and dialogue, especially as the film took seven years to make in a backyard, and its strengths can be attributed to both careful planning and lucky accidents. “There is a moment where I land and then shrink the spaceship down and eat it,” Coyne said. “In my storyboards I had me landing, but I didn’t know what I was going to do. Can’t leave the ship there. In a panic on the sidebar of the page I drew me shrinking it down and eating it. Once we shot it and did the special effects and everything, to me it’s the greatest moment of the film. That really speaks of a Flaming Lips idea or philosophy – ‘eat your own spaceship’ as a kind of metaphor for the experiences that you take in, in life. It’s kind of cosmic or psychedelic, and it was just a dumb accident that happened on the side of the page.”

By the way, Coyne knows there is gravity on Mars. “[But] I wanted to have a gravity control device!”

Currently on sale at the Flaming Lips site.