by Jason Guerrasio
in Directing, Directors, Filmmaking, Interviews
on Nov 24, 2008 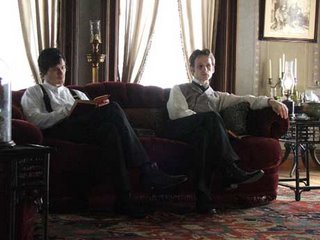 The Talented Mr. Ripley by way of Somerset Maugham, Henry May Long is a drama about two men, Henry May and Henry Long, set in the upper crust and under belly of 1887 New York City. Long is obsessed with the golden child May, and via constant surveillance has come to know his secret debt and drug addiction. He convinces May to care for him for three months, as an illness takes his toll, in exchange for money to repay May’s debts. Hiding out, along together, their friendship expands and May begins to find meaning in his own limited life of guaranteed success and leisure. Long intends to set sail on a whaling ship at the end of the term, and May comes with to see him off, only to be confronted with Long’s own web of lies and sordid secrets.

Randall Sharp, the film’s writer and director, had been directing theater for 26 years when she decided to make the film. She runs, along with the co-star and producer of the film Brian Barnhart, the Axis Theatre company in New York’s West Village. Most of Axis’ company members appear in the film, which is playing for a brief run this week at the Sunshine Landmark theater.

Filmmaker: How did the film come together?

Sharp: I made up the story on a car ride to Woodstock one day. I thought, what would happen if someone was willing to do anything to get someone else to pay attention to them? What if that decision led to the other person learning to value their life as if every day was their last? I’ve been running an experimental theatre company, Axis, for about twelve years, and I took it to them. We developed the script almost the same way as our plays – writing parts for certain actors in the company, reading it through together, seeing what worked and what didn’t. I was friends with [executive producer] Wren Arthur who was working for Robert Altman at the time, and slowly it all got pulled together. We shot it in 20 days with a little over $1 million dollars.

Filmmaker: Did people laugh you out of the room when you said you wanted to make a low-budget period piece? How did you accomplish it?

Sharp: It all worked out as sort of a miracle. I’m a first time director with zero film experience, and I’m also like a 19th-century period freak. I wanted it to be as perfectly accurate as it could be. As we started crewing up, people started materializing who were just really interested in reproducing that period on a shoestring. Everyone involved, from the producers to the AD to the DP, everybody – was was so excited by this immense challenge and just pulling for the movie. Especially when these [production and costume] designers who I didn’t even know arrived with this flame of passion to recreate this period for me – that was an incredible gift. They became as obsessive as me.

We shot most of our interiors in the Lockwood Mansion in Connecticut, where they shot Stepford Wives. Some of it we left untouched; some stuff we had to dress, like we turned an old bowling alley into a bar; we dressed some rooms entirely from scratch. We shot the seaside scenes in Mystic, Connecticut – they have a recreated 19th-century whaling town with real buildings, which was convenient. The boat scenes we shot on the last wooden whaling ship in existence – that was a real honor.

The actors came very well versed in that period. We’d done a play about Hawthorne and Melville’s relationship. I think once you put on those clothes it’s pretty easy to get into those mannerisms.

Filmmaker: How did you work with your cinematographer to keep it historically accurate?

Sharp: I knew a fair amount about actual lighting sources from the period – believe me, there’s a book about everything. Some houses were starting to have light bulbs and electric light; a richer family like the Mays would definitely have had some form of electric. Other houses would have only had candles. Some of those scenes Ben [Wolf] actually lit with nothing but candles, which was terrifying but came out beautifully.

I started watching historical movies and paying attention. Like a room set in 1860’s that’s brilliantly illuminated — where is this light coming from? We wanted to be very careful that all the light was accurate and motivated. We talked at length about light for every scene, some ad nauseum, like our night street scene for instance. It turns out that there was actually incandescent gas lights on the streets of New York back then. So we did our gas lighting look and flicker effects.

Filmmaker: What were some other challenges of filming this on location?

Sharp: Airplanes and cars. Airplanes and cars. So many shots were ruined by planes. Brooklyn is, of course, on the flight path to JFK. We were locking up traffic and staring at the sky simultaneously, telling cars to stop and watching for airplanes. Also it was freezing, freezing cold. Our mansion wasn’t heated, we’re out on these docks with parkas thrown over the costumes… People were in pain.

Filmmaker: In terms of the story, why did you choose this period?

Sharp: I felt like setting it in that period would wake up the story again. Otherwise it’s just another guy shooting heroin, another gay guy who loved a straight guy. Also it’s a way to say, have we really come that far? These people are suffering back in this period, and there are people suffering in exactly the same way, today. Some guy messed up and spent his father’s money, accidentally started taking Laudanum, I mean have you not heard that story last week? Problems with your social position, with not being rich… these are universal, timeless problems. I thought that maybe people could look at the story with a new eye, because it was set in another world. We wanted to set it in that period to show that people back then are exactly the same as they are now. Death walked next to them more than it does now, but basically people are the same, bumbling through their lives trying to get love.

To me, the 19th-century is the tipping point of the modern world. It’s like the last time we had one foot in the past and one foot in the future. 1887 is only a few years before World War 1, and then only a few years after that until the atomic bomb. Some people’s lives spanned that entire period, from what could really be the pre-industrial past to what was the modern future.

Filmmaker: What was different about directing film than directing theatre?

Sharp: Actually shooting the movie is easier than directing a play, because you only have to make it correct once, in one tiny small square. It’s like being a machinist in a way; you’re pointing this precise machine at something to make it capture the perfect moment.

What’s harder than directing a play is editing a movie. That’s more similar to directing a play. You’re looking at it from every angle at once. You have to keep taking out stuff that you don’t want to and putting in stuff that you don’t think is perfect, and then realizing after the fact that maybe you didn’t get the right shot. That struggle feels like watching an actor during a performance. An actor onstage is a loose cannon, and you’re sitting in the control booth going ‘why aren’t they doing what I told them to do?”

Filmmaker: I wanted to ask you about women in the movie, who all seem desperately dependent on the men. Was that a period comment or was it just part of the narrative?

Sharp: I suppose there’s really only a few women in the film, and the two central ones, they both have their own money. There are some women who, even if they are supposedly independent, will never be independent because they’re always gonna look to a guy. I sometimes wonder, what would have happened to me back then? When women who were not working class were literally supposed to sit in the house all day. If you didn’t do that you were hysterical, you were dosed up with something and sent away.

Filmmaker: I thought the ending was quite tragic – Henry May tries to admit his mistakes and own up to his problems, and his family won’t let him talk about it.

Sharp: Exactly. And in his hand he holds his prison, [a figurine model of his house that Henry Long made for him.] I wanted to look at the frivolity of a life of extreme leisure. When Henry May comes back and he’s had this awakening, they’re still talking about the same thing – ‘let’s go to this party.’ It’s a life of dissipation.

Filmmaker: That was really affecting, to realize that he’d wanted to get in trouble all along, that May had wanted that freedom as much as Henry Long.

Sharp: Yeah, that was a question during shooting, of that happy ending – ‘maybe he gets out later on…’ For the people who live in the May Mansion, every day is just another wisp, another veil over nothingness. When he was living with someone he thought was going to die, he started to live a life where that wasn’t the case, where every day mattered. The probable ending would be that he marries that girl, and they throw fabulous parties and become the most fashionable couple in town, and he becomes more and more dead…. But you can always hope that maybe he decides to leave, after the movie ends.

Filmmaker: Have audiences reacted to the story in any surprising ways?

Sharp: We did a lot of test screenings and workshops, so now people seem to respond to the film the way we intended, yeah. My favorite Q & A question though was, after a test screening, the lights come up, everyone’s silent for a moment, and someone says, “So they’re both named Henry?”