by Jason Guerrasio
in Directing, Directors, Filmmaking, Interviews
on Nov 6, 2008 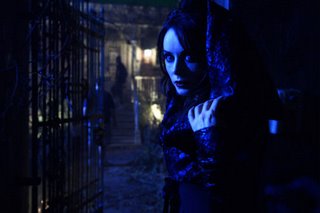 Back in 2004, director Darren Lynn Bousman was taking his violent horror script The Desperate to a number of studios, only to be told it was too grisly for mainstream viewers. Enter Saw creators James Wan and Leigh Whannell, who loved The Desperate and immediately contacted Bousman about reworking the script into a sequel to their Saw franchise. This began a partnership that saw Bousman direct three successful Saw films in a row.

Taking a break from the infamous horror series, Bousman returns with a long gestating labor of love: Repo! The Genetic Opera, a futuristic horror musical based on a play previously staged by Bousman in L.A. and New York. With a cast featuring Sarah Brightman, Paul Sorvino and Paris Hilton among others, Repo‘s bizarre hybrid of slasher, comic-book and gothic sensibilities must be seen (and heard) to be believed.

We spoke to Darren Lynn Bousman about the twists and turns of getting his quirky horror musical made and into theatres. 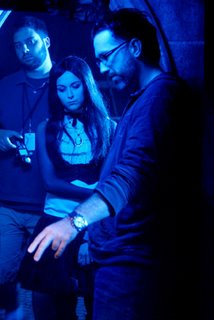 Bousman: It’s weird, I think it’s going to miss people’s radar because even thought it’s coming out theatrically no one knows about it! It’s fucked up that we’re coming out and the majority of the population has never heard of Repo. In fact, I’m introducing the film at NYU tonight and every college I’ve gone to I say, “Raise you’re hand if you’ve never heard of Repo,” and I would say 97 percent of the hands go up. It’s sad — we have no marketing dollars.

Filmmaker: There is such a specific audience that would see this film if they knew about it. Are you trying to reach them through targeted grassroots promotional stuff?

Bousman: That’s all we’re doing! Basically it’s myself and two other people doing it. We run the website, we print out flyers every night. Every single day I’m online on chat rooms talking to people about the movie. This isn’t Lionsgate doing it; this is us. Here’s the deal. There are those who believe that there is no market for this movie. They’re completely wrong, there is a huge market for this movie and we’ve seen the market. We’ve done screenings all across the United States, and some in Europe, and every time not only are they sold out but there are lines wrapped around the block! We have kids dressing up as the characters of the movie singing the songs in the theater and I don’t think anyone ever expected that. The great thing about Repo, and I hope this continues to happen, is it upsets a lot of people. I read this morning people were giving it zero stars and saying it was the worst movie they’ve ever seen in their life. They said that there was not one redeeming value in the movie and that it’s horrible. But there are other people who are giving it a “10,” saying it’s the most innovative, original thing. I’d rather it polarize people than have it [split] people right down the middle line. If you think about it when Rocky Horror Picture Show first came out 35 years ago it failed, it was torn apart by critics, people thought it was ridiculous and then all of a sudden people started showing up in theaters dressed in costumes and singing the songs. Now here it is 35 years later and it’s still playing, it’s stilling playing midnight screenings everywhere. We’re not Rocky Horror, I wish we were, but I’m hoping that the community aspect of Rocky Horror comes with us.

Filmmaker: I found the film really overwhelming at first, but then later on the songs came back into my head and the movie really haunted me. It’s the kind of movie that you might not get the first time but that you might be lured to go see again.

Bousman: That’s what I hoped for. This is not a kind of movie that you walk out of the theater and say, “What did you think?” It’s more, “What the fuck did I just watch?”

Filmmaker: I think having a good score is really part of it. Also you’ve got Sarah Brightman in it.

Bousman: Sarah Brightman, she is goth.

Filmmaker: [laughs] Yeah, she is goth.

Bousman: I don’t think that people think of Sarah Brightman and immediately go to goth, but hanging out with Sarah for a year now, that’s who she is. She has a really dark side to her. I think the cast is extremely important because, again, we don’t have money behind the marketing. How do you sell a movie? You sell a movie with a poster. And when you look at that poster it’s, “What the fuck, Sarah Brightman, Paris Hilton, that’s a movie that I’d want to see!” If I never saw anything else I’d want to see it from purely off the “what the fuck?” factor. I think that’s our best marketing tool is the cast names because they’re so weird. The movie appeals to the fringe, it appeals to the goth-y outside-the-box [crowd], the gay crowd, the theater crowd, and so we tried to target those markets that appeal to all of those people. If people show up and see it it’ll expand and that’s what I’m hoping right now.

Filmmaker: I get the feeling the DVD will explode.

Bousman: Well, I hope so. But having done three Saw movies, those are movies that are fun to watch in the theater but you don’t lose anything watching them on video. Repo is not a movie — it’s an event. I’m not saying a cheesy tagline here. Imagine if someone watched Rocky Horror Picture Show for the first time on a laptop computer. They would probably hate it. This is a movie that is like a concert. It’s all about the experience of listening to a rock opera.

Filmmaker: Repo has a really striking look, what did you shoot on?

Bousman: We shot on the Genesis HD by a d.p. named Joe White, a good friend of mine. We went to USC Film School and the budget of the movie was less than Saw III and Saw IV and those were both small budget movies. I think Saw III was $8 million, Saw IV was $9 million. What was great about [the Genesis] was we could do lookup tables, which I’ve never used before. I could dial the film’s look while shooting it so I’m looking at the movie on a video screen the way it’s going to look in the [theater]. And of course the production design had a lot to do with [the look]. David Hackell, who directed Saw V, did the production design on this and it looks cool. I mean these sets are like basically cardboard cutouts, they’re nothing, but he did such an amazing job on it with no money.

Filmmaker: Whatever looked fake kind of fits into the film’s comic book aesthetic.

Bousman: That’s why we went with the comic book look — we knew that we were not gonna have the money to do things real so we embraced being crazy and weird. We embraced looking cheesy. In an example, one of our first ideas for the set design was Mr. Toad’s Wild Ride. Mr. Toad’s Wild Ride was just cardboard cutouts and you know they are cardboard cutouts but they put such great detail in those things. As long as you stay with that [aesthetic] the entire way it can work. There’s a scene in the movie where Anthony Head is cutting someone who’s strapped to a chair and all these people around him are singing. Well, that set is plastic. We ran out of money, we had this big song to shoot and so the production designer said, “All I got, Darren, is plastic.” But it works for the movie that we’re in a plastic room. It looks cool. I think as a filmmaker you have to embrace, those limitations. The worst thing to do is to strive for a “10” and reach a “4.”

Filmmaker: Did you have any difficulties attracting actors to such an unusual project?

Bousman: No. Every single one of those actors were my first choice except one, Sarah Brightman. She was never thought of because we thought she was out of our reach. We had another opera person cast but she became really diva-like and we lost her a week before the recording. Someone threw out Sarah Brightman’s name and I laughed but she read it and loved it and was on a plane two days later from South Africa. She said that she felt more comfortable doing this movie than she does in a lot of other things she’s ever done because this is the world that she lives in.

Filmmaker: Repo is pretty graphically violent. And just last week there were reports of violence at theaters playing the recent Saw release. Your thoughts?

Bousman: [Violence in storytelling] has been around since the beginning of time. The early written word talked about serial killers, murder, and violence. You look at any artwork back in the days and it was organs being ripped out. The difference now is just that there are more ways to promote it. It’s always been there and so when people say Saw causes violence, no that’s completely wrong. Saw doesn’t cause violence, violence has always been in art, and it’s never going away.