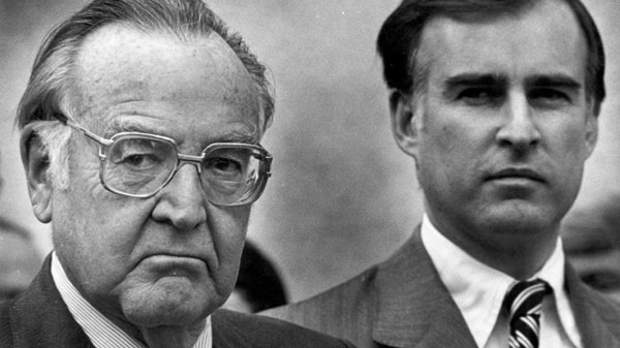 While Ethel, Rory Kennedy’s portrait of her mom, widow of dad Bobby, might have made a splash at Sundance, it’s not the only descendant-directed doc about a member of political royalty to have played the fest circuit this year. With California State of Mind: The Legacy of Pat Brown, director Sascha Rice and her sister, executive producer Hilary Armstrong – both of them daughters of former California State Treasurer Kathleen Brown – have chosen to bring to the screen the story of their grandpa, the late Governor Pat Brown. Nicknamed the “Architect of the Golden State,” the two-term governor had a slew of larger-than-life achievements that included fathering civil rights acts in employment and housing, affordable higher education, the California Aqueduct – and current Governor Jerry Brown (that would be “Uncle Jerry” to the filmmakers). Filmmaker spoke with the sisters prior to the film’s nationwide rollout on PBS. For more information, visit the film’s official site.

Filmmaker: You come from a family hailed as the “West Coast Kennedys” – yet neither of you, as far as I know, ever got into politics as a profession. Why not?

Hilary Armstrong: Growing up, I saw firsthand how difficult it is to be a politician. You can never please everyone. You have to have a pretty thick skin to handle all the criticism. I much prefer to be behind the scenes. I am always impressed when people put themselves out there and run for office. We need more great people with integrity and commitment to run, and we hoped that by making this film we might inspire the next generation to make a difference in its own way.

Sascha Rice: It is such an honor to have our family compared to the Kennedys, but as far as being a politician myself, I would make a better benevolent dictator than a politician. Being a public servant requires a tremendous capacity for patience. I am actively involved in my community, I vote, and I stay informed, but my real passion is for storytelling and art. In keeping with the family tradition, I aim to make work that inspires positive change. When I choose a project, I look for material that inspires hope, reflection, or simply laughter. Whenever I’m asked why I haven’t pursued politics myself, I usually inquire why the person asking me hasn’t considered that path for herself. My grandfather didn’t come from a political family, and I encourage those who are passionate about politics to consider public service.

Filmmaker: Other than showing the controversial campus arrests during the turbulent 60s, the doc paints an overall flattering portrait of your grandfather. But was there anything you uncovered in the course of your research that particularly disturbed or unsettled you? What most surprised you?

Armstrong: I was surprised and impressed that my grandfather was a champion for civil rights, and that he risked his political future by taking a strong stand on fair housing when it was wildly unpopular. It was absolutely the right thing to do. I just wish he had told me more details about that aspect of his strong leadership before he passed away. I always knew about my grandfather’s success in getting the California Aqueduct built and the Master Plan for Education. I didn’t know that my grandfather worked with Martin Luther King after the L.A. riots.

Rice: As a filmmaker, I kind of hoped I might unearth a skeleton or a steamy scandal to add entertainment value to the documentary, but as his granddaughter I was relieved to find that my grandfather was a family man and a bit of a square. It actually was a challenge to get interviewees to be critical because he was remembered fondly by folks from both sides of the aisle. It was important to me that I cover not just his achievements but also the controversial issues, too. I wanted to cover his unpopular handling of the Chessman death penalty case because even though it was a dark spot in his career, I was inspired to reflect on my own views of capital punishment when I learned more about his struggle. As a filmmaker, I am naturally drawn to conflict and drama, so I looked for areas where I could dive into controversy. I also thought it was important to show that I was disappointed that my grandfather didn’t show up to the Easter Day March with the United Farm Workers, and that he ordered the arrest of the students who occupied Sproul Hall at UC Berkeley. He was human. He made mistakes and was crushed by Reagan when he ran for a third term, but I found that he maintained his integrity. So I was fortunate that I could paint a flattering portrait, but as his granddaughter it was emotionally unsettling to explore those moments of defeat and conflict.

What surprised me most was learning that he couldn’t afford to go to college. I knew he had gone straight from high school to law school, but I was surprised that it was because he didn’t have the means. Learning that he struggled financially, and that he even had to pay board and lodging to his parents, made me appreciate why he was dedicated to enacting the Master Plan for Higher Education. Filmmaker: Everyone from your uncle, current California Governor Jerry Brown, to the onetime Governator glowingly weighs in on your grandfather. But was there anyone you contacted who didn’t want to go on camera to discuss Governor Pat Brown’s legacy? There are few talking heads presented who opposed his policies at the time.

Armstrong: I called former Governor Deukmejian to be interviewed for our film. He answered the phone himself and said, “Do you realize that your grandfather tried to have me recalled?!” I said, “No, I am so sorry, I did not know that, but we would still like you to be a part of our film since we have every other living Governor of California in the documentary.” I was disappointed we couldn’t convince him to say yes. I hope that he will watch the film and see that we were trying to make a wonderful historic doc that could educate and inspire the next generation.

Rice: Actually, it was challenging to find people who were critical of Pat Brown. Enough time has passed that petty differences have faded, and he is regarded with great nostalgia. The last thing I wanted to do was a puff piece, so I worked hard to get interviewees who I thought could provide balance, but often they gave just as glowing reports.

We are lucky to have high-profile interviewees, but wrangling them was a challenge. When we interviewed Schwarzenegger, he was the sitting Governor of California, so his schedule was slammed. Finally, we ended up shooting his interview at the Santa Monica airport, where he graciously made a stop on his way from San Diego to Sacramento to do an hour interview. Even our uncle, who was absolutely willing to be interviewed, proved difficult to schedule. The film took seven years to make, and when I first started envisioning the film, Jerry was the mayor of Oakland, and then he decided to run for attorney general, and then for governor. It wasn’t that he didn’t want to be on camera, but he had his hands full with his own campaigns and implementing his policies in a difficult political climate.

Filmmaker: Your grandfather really played a major part in creating California as we know it today – from his push for affordable, higher state education, to developing an infrastructure that pumps water from the north to the south (without which southern California would probably be pretty much uninhabitable). Yet he also strikes me as a Robert Moses, regional sort of visionary figure. Robert Moses had an enormous impact on NYC and its surrounding areas, but he’s not well known outside the East Coast. Not to diminish Governor Pat Brown’s importance, but does his legacy truly transcend beyond the West Coast? And has this question been a problem with acquiring distribution outside California?

Armstrong: We’re pretty delighted that our film has been very well received outside of California. We’ve had fantastic screenings at the National Archives in Washington, D.C., the Paley Doc Fest in New York, the Sun Valley Film Festival and the Berkshires Film Festival. Each screening has sold out, and the audience cheered and applauded us in the end. I agree that a lot of people don’t know who Pat Brown was, but it certainly helps that his son, Jerry, is the current Governor of California. California is the co-star of our film, and many people outside of California love stories about the state in the 60’s. So, yes, it’s true that my grandfather is less known outside of California, but he was courted for the national ticket, involved in national affairs like the Bay of Pigs, and our uncle Jerry has run for president three times – so I think many people know the Brown family.

Rice: When I embarked on making the film, I wasn’t sure if we could jump the Rocky Mountains because Pat Brown’s story isn’t widely know outside of California. But I have been happy to find that viewers across the U.S. are drawn to his story. Some people tell me that they get invested in his story because they connect to the family thread, and that the story is told from my point of view. Also, I think California holds a special place in America’s heart. California is special in that one in eight Americans lives in California, and there is a mythic quality to the West that breaks his story out of the geographical bounds. We’ve received invitations to screen from all over the United States, and are broadcasting across the country on public television, so distribution is happening, but it is always an effort to get the film on the radar. If folks see the film, they connect to the fact that my grandfather’s story is emblematic of the great American Dream – a guy from humble beginnings rises to overcome great odds and then builds what has been called a “superstate.” Since California is a bellwether for what happens not just in the nation but around the globe, people are looking to the film for inspiration for how to tackle issues in their own communities.

Filmmaker: So what is your ultimate goal for the film? Do you hope to see the doc in classrooms throughout California?

Rice: I made this film because I wanted viewers to feel optimistic about the future, and to appreciate that we are blessed to live in a democracy. In the film, I was careful to show how each achievement was actually born from long, difficult political battles. Change doesn’t come easily, and I wanted people today to understand that the power of democracy is in their hands. This fall we are launching an educational outreach campaign that will use the film to engage viewers in critical issues like responsible leadership, civic participation, environmental stewardship, and telling your own family story. You don’t need to have a grandfather who was a governor to have an incredible story to tell.