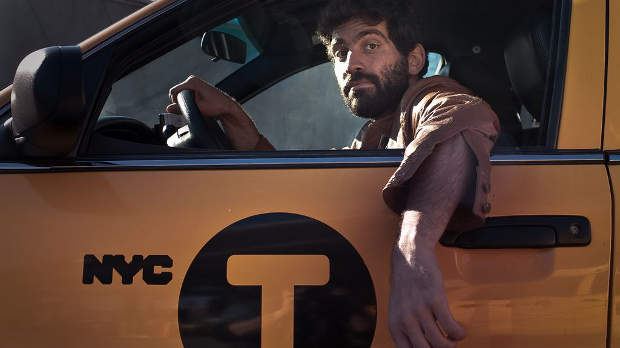 by Esther Yi
in Directing, Directors, Filmmaking, Interviews
on Dec 3, 2012

New York City’s taxi drivers are as ubiquitous as they are invisible. In his new documentary Drivers Wanted, Joshua Z Weinstein takes the passenger seat — often literally — and trains his camera on the men at the wheel, as well as the gristly mechanics and staff who work behind the scenes at a Queens-based taxi company. Though this may be a niche community, larger economic forces are clearly at play: many of the drivers are bankrupt, broke, or struggling to support their families. From the bustle of the garage, full of camaraderie and occasional conflict, emerge several key characters — perhaps the most poignant of which is Eric, a Chinese man who embarks on his first drive as an employee. The experience is not without its troubles, and one customer brazenly gyps Eric of payment. But he finds joy in the job, reveling in the “refreshing” smell of gasoline and looking with wonder upon the grimy detritus, neon sparkle, and late-night carousing outside his window. When he returns to his wife and two sons in their cramped apartment, he proclaims, with a shake of the head to demonstrate conviction: “I like driving in the town. I like Manhattan.” Taxi drivers are often relegated to anonymous people who take us places; but Drivers Wanted suggests that they are going somewhere, too.

Filmmaker spoke with Weinstein about developing the narrative, finding the right characters, and forming relationships with the subjects of his film.

Filmmaker: Drivers Wanted derives much of its energy from the verbal back-and-forth and the personalities of the employees at New York City Taxi, and in your previous film, Flying On One Engine, you documented the work of the eccentric humanitarian Sharadkumar Dicksheet. In the planning stages of your films, how do you go about finding the right individual and story? What qualities are you looking for?

Weinstein: Documentaries start out for me just like any film would: you write a narrative arc, you create characters, you have images you want to capture. And then like Terrence Malick, you show up willing to change everything. When there is a blizzard, and a yellow taxi is stuck in the dirty snow of Queens, it signifies more about the struggles of a taxi driver than any dialogue I could have written. Or the wrinkles on a 90-year-old man’s hands as he lights a cigar, the dismantling of a crashed cab… I allow the moments in life to surprise me. So I start out with a goal, a scene, an image, but I’m happy to completely change it if something else excites me.

I work as a documentary cinematographer, and often times films want talking heads and b-roll. Drivers Wanted and Flying On One Engine are projects I make on my days off, giving me the opportunity to linger on powerful images and complicated characters.

Filmmaker: Why did you choose to focus on Eric? What was it about his story that you found compelling and crucial to the overall structure of the film?

Weinstein: This film was a collaboration with my mentor, Jean Tsien [producer and editor of Drivers Wanted], an incredible talent who has been an editor for almost three decades. Even though she was born in Taiwan and I was born in New York, we share an understanding of the immigrant experience. Jean’s father was a cook at a Peng’s Restaurant who claimed to be involved with the creation of General Tso Chicken, and my grandfather drove a cab in the city for over a decade. We wanted to pay homage to our family in this film.

While we thought just basing the film on the institution of a taxi garage like Frederick Wiseman would be interesting, we also knew we needed a new driver. A new driver would be a conduit for the audience to experience the difficulties of driving. Can you imagine what it’s like? You’ve just spent $300 on a class to get your taxi license, you then have to spend $110 to rent a taxi for the day, and another $30 for gas, and now, over $400 in debt, you are out on the roads for the first time. Eric, on top of all that, had also just arrived from China, spoke little English and barely knew the geography of the city. That’s drama. I always admired The Bicycle Thief, a film which shows how one man’s bicycle can mean everything. For Eric, his taxi meant just as much as that bike.

Filmmaker: You are often filming from the passenger seat of a taxi and documenting the interactions between the driver and customer(s). Logistically speaking, how did that arrangement work, in the context of customers who hailed the cab without knowing that you would be inside with a camera?

Weinstein: Luckily, I have a nice smile!  You know what, New Yorkers are the best — nothing fazes them. In fact, you almost have to be an exhibitionist to live in Manhattan, with everyone on top of one another, apartment windows exposing the secrets of peoples lives, and now even NYPD cameras on every corner. Most people didn’t seem to care.

But really, the film is about a taxi garage, about the menagerie of different immigrants and ethnicities under one tent. How many places in the world can you hear people yelling at each other in French, Tagalog, and Arabic in the same space?

Filmmaker: There is a funny scene where one of your central characters weakly waves bye to the camera and closes his bedroom door behind him, as though he has finally tired of being filmed for the day. As a documentary filmmaker, how do you deal with the discomfort or wariness — if there ever is any — on the part of your subjects?

Weinstein: When I make my own films, I mostly work by myself while filming, and the relationships I make are as important as the film. Now whenever I call Stan, the owner of the taxi garage, he asks for an invitation to my wedding, and Eric has invited me and my family over to his house for meals. Documentary and Fiction filming are identical in almost every facet, except the difference is, in documentary you cannot walk away from the set. The people in your films are not actors; they are real people who are sharing their most intimate moments with you and you have to respect them. So if someone wants me to turn the camera off or wants me to leave, I have to listen to them.

Filmmaker: Can you describe in brief your work schedule on a typical day of making of this film?

Weinstein: A typical day of filming looked like this: I would wake up at 2:30 a.m. and head over to the taxi garage. (One of the golden rules of documentary is nothing good happens during the daytime.) Shape-up began at 4 a.m., during which the nightshift drivers and dayshift drivers swapped cabs. Sometimes I would just drink a cup of coffee, talk about the Jets (this was 2009, so it was a big year for [Mark] Sanchez) and hang out all day, rolling only a couple minutes of film. Many people at the cab garage just thought I was another driver. One person even offered to buy my camera off me, thinking I was trying to sell it because I was hanging out so much without turning it on.