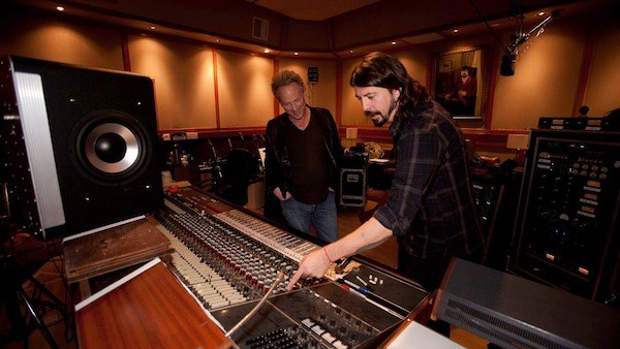 Dave Grohl has a history of fruitfully redefining himself. After Nirvana self-destructed, he went from being the former drummer for one the most momentous rock bands of the 20th century to being the frontman for one of the biggest acts of the 21st, Foo Fighters. So it shouldn’t seem too surprising to find him making a successful broad jump from musician to documentarian, especially with a project is as close to his heart as Sound City. Opening its doors in 1969, L.A.’s Sound City Studios was low on frills and gloss, but boasted an almost magical live-room ambience and a one-of-a-kind Neve recording console that gave birth to countless classic albums — Neil Young’s After the Gold Rush, Fleetwood Mac’s multi-Platinum self-titled album, and Tom Petty & the Heartbreakers’ Damn the Torpedoes are just a few. Following a long dry spell ushered in by the arrival of digital recording in the ’80s, the resolutely analog studio experienced a rebirth in the ’90s after Nirvana’s Nevermind became a smash and everyone wanted to record where that milestone was made.

When Sound City finally closed down in 2011, Grohl bought that famous Neve board for his own studio. Soon, he set about making a tribute album in the studio’s memory, collaborating with fellow Sound City clients like Stevie Nicks, Rick Springfield, and Paul McCartney under the Sound City Players moniker. But then he went a step further, creating a cinematic love letter to the studio, interviewing its owners, engineers, and famous clientele, as well as documenting the Sound City Players sessions. But as he revealed in a recent coversation, the movie ended up being about more than merely a recording studio.

Filmmaker: How did the idea for the Sound City documentary germinate?

Grohl: This entire Sound City experience just fell into my lap, just like Nirvana becoming hugely popular; this whole thing just kind of happened. None of it was planned. There’s something magical about that place and there’s something magical about the story. When I first walked into Sound City in 1991, the three of us in Nirvana had no idea what was gonna happen next. We sure as shit didn’t expect the band to explode. And when they closed a year ago and I bought the mixing desk, I had no idea that what originally was gonna be a short film documentary about just a history of the board would turn into a feature-length documentary about the human element of music. The whole thing has kind of blossomed into something much bigger than just a retrospective documentary about a studio

Filmmaker: Did you start out intending to document your use of the board with Sound City Players, and then decide to tell a larger story?

Grohl: It was really the opposite. It’s funny – my mother has always been a big influence on my life, because she’s a wonderful woman and I’m a mama’s boy. She’s given me two of the greatest pieces of advice of my entire life. One was, “Yeah, go up and try out for Nirvana, see what happens.” The other was helping me realize that the story of Sound City and the history of the board was a much bigger conversation. She was a high school English teacher for 35 years, and she was a debate coach and a forensics coach…she’s a brilliant creative writing teacher. She said, “No, no, no – what you do, you don’t begin the movie by saying, ‘The studio has closed and I’ve purchased the board, let me tell you the story.’ There’s an arc to the story.” Which she explained to me, and she made me realize that it was a much bigger story and in that the whole thing turned into what it is now.

Filmmaker: So where did the story start for you?

Grohl: It started with me pulling the board out of Sound City. When I heard that they were closing, a little over a year ago, I very gently and politely said, ‘If you guys ever want to get rid of that board I would be honored to have it. Every producer in the world wanted that board, it really was considered the crown jewel of all the Neve desks in Los Angeles because it’s one of a kind. Rick Rubin wanted it, [Tom] Petty wanted it, everybody wanted that board. And I think they sort of decided that I should be the one to have it, because of what happened with Nevermind, the Nirvana record. When we went there in ’91 they were just about to close because technology had shifted over to digital SSL boards and digital outboard equipment, nobody wanted that old analog shit anymore. And we went there because it was cheap, basically. And when that album blew up, their business blew up too, and I’d always remained close to them.

Filmmaker: How did you begin interviewing people for the film?

Grohl: At first I went over there and we had to figure out how to move that thing; it hadn’t been moved in 40 years. And my friend [co-producer] Jim Rota brought a camera and I sat down with Tom Skeeter, the owner of the studio, and in 15 minutes he blazed through some of the most epic rock & roll stories I’ve ever heard. Shit that would just make your jaw drop. And I thought, “Wow, Okay. I want to talk to everyone. Give me a list of all the records that have been made here.” And they said, “That’s impossible.” I said, “Make a short list.” So I started getting, like, Rick Springfield’s email address and Rick Rubin’s phone number, and Neil Young, I started calling everyone, hoping that maybe someone would be interested. And every single one of them wanted to be involved because of what Sound City represented, which was real, true recording. Actual people making real music, where you just push the red button, say, “One, two, three, four, go,” record a song, and it becomes magic. That’s what happened at Sound City. You had to be a certain type of person to do it that way. Filmmaker: What is it you really want to get across with Sound City?

Grohl: A lot of people don’t understand the importance of feel. A lot of people don’t understand the importance of communication between musicians and the beauty of imperfection and the personality that lends to music. The sound of people being people is what makes the hair on the back of your neck stand up. I interviewed 40 people, legends, about these really heavy questions, and it was more of a conversation, because I didn’t want it to become a debate. Because I didn’t want a winner, I didn’t want analog or digital to prevail. The whole thing was more a conversation about how a human being can survive in a world where human beings aren’t really necessary because you have machines doing other things for them. “Oh, I’m gonna get that remote control so I don’t have to get up off the couch and change the channel.” Or, “I’m gonna get a ProTools rig, so I don’t have to play my instrument that well but I can manipulate it in a way that makes it sound like I’m the greatest drummer in the world.”

Filmmaker: Do you remember your first impression of the studio when Nirvana arrived there to record Nevermind?

Grohl: It was a fucking shithole [laughs]. That was the first question I asked each person, “What was your first impression of Sound City?” And nine out of ten people said, “It was a fucking shithole.” Because it was like a time warp, you would walk in the front door, and there was still brown shag carpet on the wall. They had a fucking couch they rented for over a decade, a rented couch, It was disgusting. I mean, they never upgraded anything, it was the same tile that Mick Fleetwood lined up all his empty wine bottles on. But then you would walk down the hallway and see all those Platinum records and think, “Oh my God, really? That Fleetwood Mac record was made in this dump, are you kidding me?” And then, once you put instruments in that room an started playing, that’s when you realized, “Wow! It doesn’t look pretty, but this sounds good!” It was the perfect storm, this unbelievably beautiful tracking room, which was a factory, it was never acoustically designed, and a control room with a one-of-a kind Neve recording console. And if you were good, all you had to do was hit “record,” and you would get Damn The Torpedoes, or you would get After the Gold Rush, or whatever.

Filmmaker: As a first-time director, how did you feel telling a story from this vantage point?

Grohl: It was amazing. I’ve never done this before, so I was just gliding through the whole thing on a cloud…I’ve interviewed a few people in my life, but I’m used to being on the other side of the camera. And it was easy talking to musicians; I mean, I do that all day long anyway. Interviewing Neil Young or Trent Reznor [Nine Inch Nails] or Stevie Nicks, it was almost like sitting in the front lounge of the bus on tour. It was really easy to talk about these things because it’s what we always talk about anyway, but putting a movie together, a movie like this, where it’s a conversation about a controversial subject [analog vs. digital], made me a little nervous. Because I didn’t want it to seem biased.

Filmmaker: Were you concerned about being able to capture the sound of that Neve board for the film?

Grohl: With that board, all you have to do is plug in and hit record, that’s it. The sound of that board is within the few wires that it’s made of. You don’t really have to do much. That board hadn’t moved in 40 years, I was terrified of pulling it, it’s like it had roots, I was so afraid of moving it. And all we had to do was pick it up, put it in my studio and plug it in, it was great. [Wryly] We spent about a week cleaning all the cocaine out of it…

Filmmaker: This might be the first feature-length documentary about a single recording studio. Which others would you like to see?

Grohl: There’s so many legendary studios – Abbey Road, there’s Capitol, there’s Electric Ladyland, there’s Shangri-La, there’s Sun Studios…and each one of them has their story, and unfortunately a lot of them are closing. A lot of them just can’t survive in this world of digital technology, because they’re considered impractical or they’re considered obsolete, where they should be considered cathedrals, the should be considered museums. But that was one of the things that we were trying to suggest with Sound City – you may love your records, but don’t take for granted the places where they were made, because if it weren’t for those rooms, and if it weren’t for those recording consoles, those albums wouldn’t sound the same.

Sound City premieres at the Sundance Film Festival on January 18 and begins showing at selected theaters on February 1. The Sound City – Real to Reel soundtrack album featuring Sound City Players is out March 12 on Roswell/RCA Records.