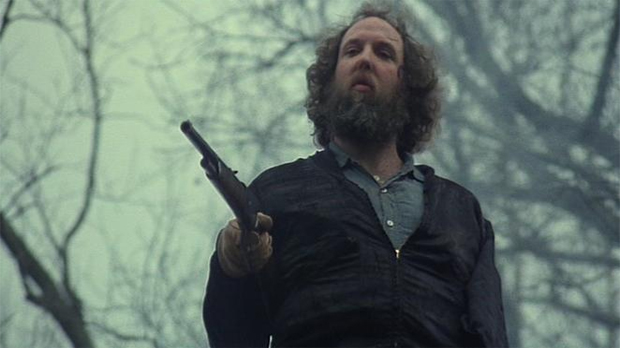 by Vadim Rizov
in Directing, Directors, Filmmaking, Interviews
on Jan 29, 2013

Tuesday night at 92Y Tribeca in downtown Manhattan, critics Nick Pinkerton and Nicolas Rapold presented Walter Hill’s 1981 Southern Comfort and the man himself afterwards. “I’m very pleased that you’re looking at this movie 30 years later,” Hill first said when sitting down for a 57-minute Q&A. “You’ve made an old man happy. The movie, when it came out, got mostly bad reviews and did absolutely no business. Did better in Europe and Asia.”

“Did better in Europe and Asia” is a common lament for American director prophets without honor in their own country. Hill’s not precisely one of those — 48 Hours was an undeniable hit — but the last decade-plus has been tough. His last film was 2002’s Undisputed, a typically beautifully cut-to-the-bone prison boxing movie vengefully dumped by the Weinsteins when star Wesley Snipes refused to participate in reshoots designed to make his murderer character more sympathetic. Friday, Hill returns to theaters with the Sylvester Stallone vehicle Bullet To The Head.

Hill’s work frequently focuses on Americans at cultural war and violent odds with each other, in images as beautiful as they are tightly edited, matching his famously laconic dialogue. It’s as if the lack of overt thematics is designed to repel any attempt to translate his movies into portentous words, even when the glancingly addressed tensions couldn’t be heavier: black-white racial tensions in 48 Hours, the same amped up by carceral injustice in Undisputed, and everywhere the stink of class privilege and division.

Southern Comfort follows a group of Louisiana National Guard members on patrol in 1973. It’s blatantly a Vietnam War allegory: the Guard steal some boats from Cajun fisherman, open unprovoked fire, and are hunted down mercilessly in response by natives only fleetingly glimpsed through heavy trees, in an unfamiliar landscape populated by poorly trained, resentful conscripts uncertain what they’re doing there and totally unfamiliar with the people they’re patrolling. But Hill’s long maintained he had no allegorical intent. Recalling a two-day cast rehearsal prior to production, he summarized a speech he made to the cast: “I said something like, ‘A lot of people will perceive this to be a metaphor for Vietnam. I don’t like to make movies about metaphors, I don’t think we should deal with it in that way. Let’s just go make a movie about guys caught in a situation, and I’m not going to answer any goddamn questions about this.’ I said this to the actors. I was probably overtrained because for one none of them ever asked me anything remotely about metaphors.”

That’s funny and in a certain sense true: when surviving Guardsman end up in a small Cajun village, they discover their hunters as a few members of a vibrant community in danger of being extinguished. The film concretely engages with its Vietcong stand-in rather than simply substituting one faceless foreign culture for another. But it’s also true that Hill’s claims that he’s interested in “tough little stories” and doesn’t have any broader ambitions are in the same evasive spirit as his movies. He’d hate to be accused of didacticism, and so disclaims any larger ambitions to a fault.

With minimal further editorial intervention, some highlights from the generous, nearly hour-long Q&A:

On the origins of Southern Comfort

I had done a movie in Louisiana a couple of years before [Hill’s 1975 debut Hard Times], and it had a Cajun sequence. As is the origin of so many things I was involved in, my writing and producing partner David Giler said, “You know, those Cajuns strike me as interesting, tough guys.” I said, “Yeah, they are.” He said, “Well, let’s do some kind of adventure story.” And we were interested in the National Guard for some reason. We had both of us spent the Vietnam years in a foxhole in Hollywood, and the National Guard somehow loomed larger in the picture in those days. It was always perceived as a way to avoid the draft. It’s, I think, a more legitimate calling at the moment, they’ve been serving in Iraq and things like that, and they’re much better trained, they’re much more like real soldiers now than back in those days.

[After Michael Kane wrote a draft], the studio didn’t like it. David and I rewrote it, the studio still didn’t like it. We messed around with it some more and we did some other things. It was put in what we call turnaround. We found some finance for it, not a lot, and we put it together and went off to Louisiana and did it.

I knew Don Siegel, a very great director and one of my heroes. And Don told me, “Oh Christ, you’re gonna do these action things.” He wasn’t really talking about this film. He said, “One of the rules is don’t ever rehearse the goddamn thing.” Usually you’re fighting for rehearsal time. He said, “No no.” First place, at least half the movie, in any action movie, you can’t really rehearse because of the physical nature of things. The kind of actors you use don’t like to rehearse much. The other thing he said was, “The other thing that happens when you rehearse the hell out of a movie is that everybody ends up hating the script.”

Fred had been in a couple of movies. He’s from East Texas. Tough guy, but he’s one of those tough guys that — he’d been in the army, he’d gone to Europe on the G.I. Bill, he’d discovered art. I’m making it sound kind of funny, but he was from a very tough, working-class kind of life. He has a very fine sensibility, but at the same time he so understands the roots of this kind of guy.

I want to say something about Franklyn. He was a wonderful actor. He’s probably best remembered for The Onion Field, he gave a wonderful performance in that. I met him, I told him it wasn’t such a great part, but he said, “No, I can do something with that.” He was an openly gay person, which was very rare about 1979, 1980. The crew, this was Deep South, and I said, “If you have some problems, you come to me and I’ll take care of it.” He said “No, I can take care of myself. I’ve had a lot of problems in my life. You don’t worry about me, you worry about anyone that messes with me.” And he was a tiny guy. And there were some problems, there were some incidents where somebody ridiculed him or something. I wasn’t there, I heard about it. And he was a fearless person. Franklyn was, I think, the second person I knew who died of AIDS and he was a wonderful actor, a great guy.

On what he likes to drink:

It depends on the time of day. I liked to have a sharpener around seven o’clock, and I usually have a shot of whiskey and it’s usually Johnnie Walker Black. I drink it neat, and then I’ll break the rules in a classic way and I switch to wine. Occasionally I like martinis. I don’t drink nearly as much as I used to.

I am committed to brevity of statement. I think movies are generally too long and they say the same thing 26 times. […] It seemed to me we’re practicing some form of literature, kind of left-handedly. David Giler, who figures so largely in my life, always describes that this was the only form of literature that was only read by the people who would destroy your work. That’s so often true.

On figuring out how to shoot on location:

You go there, you look around and you figure it out. There’s no theoretical thing. Somebody says the question: “How do you eat an elephant?” Well the answer is, one bite at a time, and that’s the way you make a movie. When you start a movie, you can’t do it. It’s too big, it’s too complicated, it’s…Jesus fucking Christ. Especially if it’s gonna be a big one. The one that’s opening this week [Bullet To The Head] is a little movie. There’s something on IMDb that it cost $50 million. I don’t know who got the 50, but it certainly wasn’t spent making the movie. But even the little ones are big, and the big ones are just unbelievably big. So you eat the elephant.

Most action movies stink. They’re the back porch of filmmaking, and they’re not very well done at all.

On Charles Bronson, who starred in Hard Times:

He was a touchy guy. He was kind of professionally mean. I wrote the script and they had offered it to a couple of actors and they didn’t want to do it. Then we sent it to Charlie. I was this dumb shit. I said he was too old. I never really was in love with Charlie too much. A day later, which was unbelievably fast, they called back and said he read the script, liked the script, wanted to do the movie, but he had to meet me. He wanted to see if I measured up.

Charlie comes out of a side room, wearing a black T-shirt, black jeans. God, he was really in shape. I started to reach out and shake hands and he just walked by. He grabbed a chair, kind of a small wooden chair that was there, turned it around, boom — just one move, boom! Bam, put it down, then sat kind of backwards on the chair, leaned over the back of the chair — and he hadn’t even said “Hello.” And he said, “Why do you think you can direct this?” So. There was a pause.

He never said much, he was very quiet. He always seemed to be angry about something, never fully stated what the problem was. But I’ll tell you something. It was almost like magic, some kind of catnip. He was enormously attractive to small children. Kids would look at him and they would come right over and sit on his lap. And he loved kids, he loved children, he had about seven. He was such a mean-looking guy, but kids never, they weren’t afraid of him. I used to say it was like King Kong, like a gorilla, but he had this magic effect on children. But he didn’t like adults very much.

I was the second-assistant director on Bullitt. Harry was up in San Francisco rewriting, that’s when I first met him. A few years later, I had become a director, he sent me a script. I wasn’t sure Harry was still alive, he was very old.

He sent me a script. There was a sequence in it that I thought was just wonderful, so I basically told him I didn’t really want to do the script, that I thought there were certain problems in it, but that I was getting ready to do something else and I wanted to use this scene in my script. I wanted him to lift it out of the script and put it in my script, I’d pay him for it. I think it’s the best scene in the movie. It’s right in the beginning, where Schwarzenegger breaks the guy’s leg, rips it off and then discovers it’s a wooden leg, and then discovers within the wooden leg is the cocaine. I thought that was fantastic. The movie, after he left Moscow, I never thought was much good, but I thought that was a terrific scene.