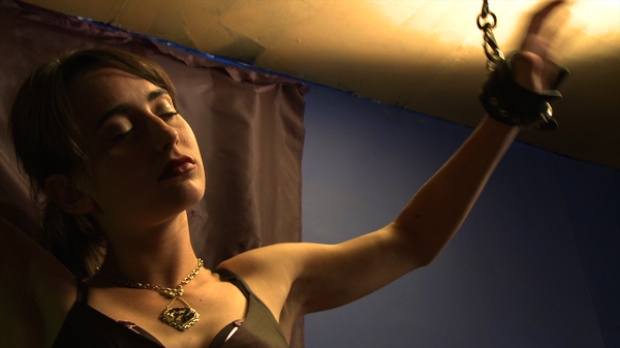 by Lauren Wissot
in Directing, Directors, Filmmaking, Interviews
on Feb 27, 2013

Picardo: I think you are correct that these days all corners of the media have been touched by the sex industry in some way, via memoirs, television subplots, reality shows, movies, exposes… you name it. So yes, the dominatrix is no longer a mysterious figure – at least not superficially. But I have noticed that most of these books, blogs, essays and programs focus on a very specific part of the commodified BDSM and fantasy industries – specifically the life and times of the Independent Pro-Domme. These are tales of experts, of virtuosity, and female power. But what is missing is the stories of the house dommes, the women who fell into the industry by answering Craigslist ads for foot parties looking for some quick cash the summer after freshman year. The ones who were recruited because they were at the right place at the right time. The ones without kink backgrounds, or the ones who, like me, were “civilian” kinksters who practically stumbled into a house only to find that their preconceptions of the industry were quite different than the real thing. I wanted to tell the story of the women who weren’t experts, who never made the cover of Vault, or who lacked the necessary boundaries to remain “unaffected” by the darkest fantasies of strangers. And I especially wanted to shed light on the professional submissive. If the commercial BDSM industry is a dark corner of the sex industry, then professional submission is the darkest corner of the darkest corner. It’s often ignored and hardly anybody will admit to having done it. You’re being paid, as a female, to be a slave for an hour. I wanted to not only come out as having done it, but to explain how my natural proclivities toward submission perhaps made me the “worst” candidate for the job. So, to sum up, what’s out there are the stories from the experts, the gurus and the goddesses. I wanted to tell the other side.

Filmmaker: Were there any particular eye-opening revelations from your own personal experience that ended up onscreen?

Picardo: Remedy is intentionally presented as an episodic series of sessions, and I strive to create a subjective experience by proxy which invites you into this woman’s progression from invitation, initiation, and education to her discovery that the job is too much for her – only her pride won’t let her quit. Not until she has absolutely proven to herself beyond all doubt that professional BDSM is not her calling. In this respect, the journey is no different than a marriage or a dream job that begins promisingly and then sours. We fight to save it, even when we know that it’s doomed. That part is universal. What is unique about working in a house of domination and submission, however, is that you are always, ALWAYS essentially in a service industry. When power exchange is commodified, the definitions of what is top and what is bottom bend and blur to a point that the keywords become just tokens. How much power does a dominatrix have once money changes hands? And what of the fact that she is not only answering to a client, but to a manager, and an owner to whom she must provide a cut? As a “habitual submissive” – I cringe at the word “lifestyle” unless Quentin Crisp says it – I found that the delicacy of maintaining “control” in a session, especially if I was supposed to play the part of a submissive, was fascinating. Was I ever a true dominant? Or was I always a submissive, even if they called me Mistress?

Filmmaker: What was production like? Where did you shoot? Did you use working dungeons or cast actual players from the scene?

Picardo: We shot 80% of the film in my parents’ barn that had been converted from a horse stable into a recording studio in the 1990s. My father, Tommy West, who recorded the majority of the session dialogue, built the studio he called “Somewhere in New Jersey” as a haven for singer-songwriters after he had found success in the 1970s as a producer. (His credits include Jim Croce, Dion, Henry Gross, and Anne Murray, among others.) At least one of my actors froze up after he realized my father was someone for whom he had incredible respect. And I often froze up when I realized what spicy dialogue my father was forced to hear in the control room. Ironically, neither of my parents admitted having any clue that the film was autobiographical until well after shooting had wrapped.

I recreated the look of a sweatshop rebuilt as a low-rent dungeon by tacking foam core onto the wooden walls with a staple gun, and using a mixture of paint and road dust to create the look of plaster. The terracotta tile floors were covered with industrial carpet, and the majority of the furniture was whatever was lying around the house. (Hence quite a few “very” fancy lamps, if you look closely enough.) The hallway and lounge scenes were filmed at an office space in a building in the fashion district. We never used a working dungeon, although we did stumble upon the wifi network of one of them – but never discovered the precise location. It was hysterical to know that we were still in the neighborhood.

As for casting from the [fetish] scene, it will surprise many that Kira Davies, who plays Remedy, is “not” in the scene. And it’s a testament to her acting ability that she was able to so completely capture the psyche of the submissive, especially the playfulness of the prideful masochist and the concept of subspace. As for the actors and crew, many were not strangers to the scene, or were bonafide kinksters, and in some cases people I would qualify as scene icons. But I will let them decide whether or not they choose to “out” themselves.

Filmmaker: Who and what are some of your influences? I was surprised to read in your director’s statement that Steve Martin’s The Jerk was a childhood inspiration. Also that you’d originally planned a career in criticism.

Picardo: I majored in film studies and creative writing at Columbia College not because I wanted to make films but because I wanted to, and this is a direct quote from my past, “know who to blame things on.” I had already contributed to the film review sections of many local papers in New Jersey as a high school student. Once, my scathing review of the Jesus-saturated remake of Romeo + Juliet was actually read in full at a local Christian church – despite my being a 99% confirmed atheist. After graduating having taken, willingly, three times the amount of film courses I needed to complete my degree, I somehow shifted gears and became a freelance editor and videographer. I never wanted to direct. I still don’t. I prefer to sit in dark rooms for hours and not talking to anyone – a born editor. But directing seems to be working out for me.

For Remedy, I was most influenced by the work of David Cronenberg and Mike Leigh – Cronenberg for his mastery of subjective filmmaking and Leigh for his improvisational working method. I made the conscious decision to never deviate from Remedy’s subjectivity. You hear what she hears, you see what she sees. Sometimes she sees clearly, sometimes she doesn’t. But somehow, within that strict framework, I was also able to incorporate a tremendous amount of improvisation on the part of my actors. What do people in sessions really talk about? Well, often enough they just hold normal conversations. Sometimes they speak in cringe-worthy cliches. The point is not creating “spanking cues” or a fantasy script. The point is communication and exchange of power, and while one can negotiate that, it’s nearly impossible to dictate a scene that rings true to what real sessions are like without allowing the actors freedom to explore.

But I would be completely irresponsible to not credit the writing of Jonathan Ames and Reverend Jen Miller, the films of Carl Dreyer and John Cameron Mitchell, David Lynch’s dream-epic Inland Empire, and especially Lizzie Borden’s groundbreaking day-in-the-life film portrait of a New York City prostitute Working Girls. These imaginative and often confessional artists show courage that has kept me motivated through the long, difficult years it’s taken me to bring this film from script to screen.

As for The Jerk, I will only say I have two older brothers (11 and 12 years older, to be exact) and they played the Ted Turner TV edit of Steve Martin’s classic comedy a few times for me before I could speak, only to discover that by the age of six I could recite it. My brothers and I still quote the film at least daily, I have a quasi-annual party commemorating it, and I have a tattoo of a thermos on my thigh. So yes, I like The Jerk. One cannot watch Godard all day.

In conclusion, I made Remedy because I had to make it. And I had to do it right. The film had to be true to the people of the scene, both inside and outside the pro realm. It had to show the good and the bad, without indicting either sex work or kink as a whole. A delicate balancing act, but I believe I was successful.

Filmmaker: So this is your first feature and the first release from your production company The One That Got Away. What’s up next on your plate? Do you plan on producing other filmmakers’ fetish and/or vanilla projects?

Picardo: I have a couple of ideas, one that branches into a different type of “confessional filmmaking” based on true stories of my very colorful friends and acquaintances, and another which focuses on deconstructing the screwball comedy. I’m hesitant to give more away than that. But before then, I plan to spend quite a lot of time going back to editing and filming other projects to which I’m less personally connected. I would love to get back into music, especially. But I never tire of capturing the cultural extremes. I spend many weekends filming freak shows, performance art, and the burlesque community. But if anyone asks for help with any project, vanilla or not, I would be happy to produce, edit, or simply lend another viewpoint. I joke that this is my Night of the Hunter, that like Charles Laughton, I’d give directing a try and then go back to my real job. But, if asked nicely…