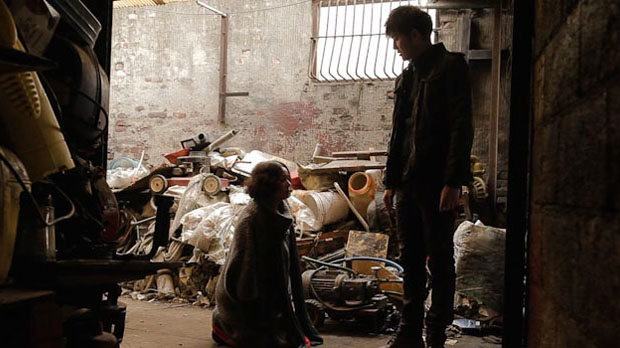 by Brandon Harris
in Directing, Directors, Filmmaking, Interviews
on May 17, 2013

Made quickly and on the cheap, prolific South Korean director Kim Ki-duk’s 18th film, Pieta, is an often disturbing revenge tale, moody and morally challenging, where redemption for one of recent cinema’s most dark-hearted anti-heroes seems just out of grasp. Kang-do (Lee Jung-jin) is a pitiless and anger-fueled debt collector for a equally brutal moneylender who specializes in forcing his often destitute debtors to commit insurance fraud in order to pay back what they owe him. Living a comfortless and filthy existence in the same slum as many of his victim, Kang-do has not a friend or a care in the world it seems. The film’s brief and pointed pre-credit passage clues us in immediately that things won’t end well. Barely a reel later, when he encounters a bizarre woman (Cho Min-soo) who begins stalking him and is revealed to be his mother who long ago abandoned him, Kang-do promptly rapes her, precipitating a series of events that call into question all of Kang-do’s assumptions about his dreary, violent existence.

Winner of the Golden Lion at last year’s Venice Film Festival, Pieta is nothing if not controversy baiting. The director, following his harrowing, overwhelmingly personal self-portrait doc Arirang, has returned to narrative cinema with a film of uncompromising brutality that nonetheless feels like a fully formed meditation of career-long obsession of Kim, who first burst on the international scene with 2003’s Spring, Summer, Fall, Winter… and Spring before an often maligned but nevertheless singular run of movies that have established him as one of international cinema’s most provocative auteurs. 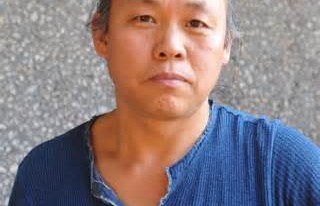 Filmmaker: After the obvious emotional turmoil of the events surrounding your last feature, was the unrelentingly bleak tone of Pieta in some way a response to that? Your films are often bleak, but this set a new bar for me.

Kim: My previous film Arirang was a chronicle depicting how my convictions as a filmmaker had collapsed and then were later restored through the traditional Korean folksong Arirang. While filming Arirang, I came to understand why I had ended up in such a rut and realized that the biggest problem was my own greed. By making Pieta, I wanted to ask if there would be a future in what we call faith. Pieta is a testament to the reality of the extremely monetary society in which we live. At the same time, the film shows how tragic the result of such extreme capitalism can be. If wars in the past were about a collision of ideologies, then modern wars seem to derive from greed.

Filmmaker: After making the searingly personal, artisanal documentary Arirang, was it difficult to return to narrative filmmaking?

Kim: Arirang was a documentary that I shot by myself and without a screenplay, which was a first in my film career. It was a sort of diary that simply revealed my thoughts and life during that period. However, Pieta was another feature film written and directed by me just like all the other 16 feature films that I had made before Arirang. Well, I was back on my home turf without much trouble. Originally, it was my intention to shoot Pieta in France and Japan, and we worked for months in preparation. However, I couldn’t cast the right actors for key roles and so decided to shoot in Korea. In the end, I think it was a better choice since I find filming in Korea much more comfortable and productive.

Filmmaker: Do you think of Lee Kang-do as a sympathetic character? What most interests you about him?

Kim: To me, Kang-do is a child with arrested development, which was caused by the loss of his mother when he was young. This is why Kang-do blindly follows orders and inflicts such cruelty without a second thought. Judging from my experience, many violent people have become desensitized by violence done to themselves and are thus generally insensitive to the pain of others. I envisioned Kang-do as a sort of robot, barely functioning in society, and got curious as to how he would behave were his mother to reappear. Would he feel any warmth, i.e. a child’s love, in his heart? Through Pieta, I wanted to show that traumatic experiences could turn humans into unfeeling robots, but also that the process could be reversed. I believe that the appropriate punishment for inflicting cruelty is not sending an emotionless perpetrator to prison or executing him, but instead melting his frozen heart.

Filmmaker: Guilt is a central theme in the film, as Lee Kang-do metes out penalties for the supposedly “guilty,” but is overcome with guilt himself. Are the wages of brutality on the perpetrator a preoccupation of yours thematically?

Kim: I am really fearful of violence. Violence begets violence exponentially. Pieta is a film which aims to thaw this violent guy’s heart by holding his mother hostage. Kang-do hurts other families without thinking twice, but I hoped he would realize his crimes when he finally feels what it is like to have his own family harmed. We must learn that this age of ours is one of violence and that nobody is safe from violence. Once rooted, violence keeps growing, spreading, and getting nastier as we see every day. Just like wars between nations, violence is sowed and eventually grows uncontrollably like an over-populated pot of bean sprouts.

Pieta does not show but rather insinuates violence so that the audience will recall already-familiar images of cruelty and feel the suffering of those subjected to such violence. There are no scenes of actual bodily harm in the film, but you can feel what it would be like should you be crushed by a press machine. To me, the machines in the film are the same as missiles. We shudder whenever really reflecting upon how many nuclear warheads exist in the world. Even those who have created and possessed them are afraid of the power of such weaponry. Why, then, are we still building such lethal devices? Are we humans really that dumb? I cannot understand why our political leaders, who claim to be smart, continue this dangerous chess game with nuclear missiles for pawns.

Filmmaker: Is there something specific about South Korea today that you think the film is getting at?

Kim: In Korea, countless people suffer from illegal private loan practices, ending in suicide in many cases. During the filming, I saw alleys strewn with loan sharks’ business cards. Somebody would pick up such a card, call the number, get a loan, be forced to make exorbitant interest payments and suffer with no end in sight. Money is the Devil of our age. Money has become a god that tests humans. I made the film to indict this tragedy of ours, but nothing has changed. Money threatens relationships between individuals as well as between nations. If nothing is done to change it, some unavoidable disaster will befall all of us.

Filmmaker: How do you know when you’re ready to shoot a scene? Do you prefer the chaos of having little preparations for the actors or do you prefer to rehearse until every beat has been thoroughly fleshed out and realized?

Kim: Before beginning each production, I talk with my actors for hours about the screenplay and explain why I wrote it. Once shooting starts, I seldom interfere with their own process and continue to roll the camera. I always get to the point of thinking to myself, “This is enough!” Though there was a d.p., I shot some scenes of Pieta myself and did the editing as well. This way, I can better express my ideas.

Filmmaker: In post-production, what was the most difficult aspect of the film to make work?

Kim: I can think of little. The key elements of any film are reels and already-recorded voices of the actors. I leave very few scenes on the editing room floor and almost all scenes make it into the final cut. I could enhance or eliminate certain things during post-production but that’s about it. Music is certainly important but it plays only a supporting role to the video and sound I already have.

Filmmaker: What is the audience to make of the Christian symbolism of the film’s title?

Kim: The title Pieta cannot represent everything about this film, which is a warning against the peril of money and lack of trust or violence between people. In particular, I would like to stress that violence erupts when trust disappears. In my opinion, violence, on a small scale, is terror between individuals and on a large scale, war between countries.