The Rasmussen Brothers on Shooting the Low-Budget Horror Movie Dark Feed, Part One 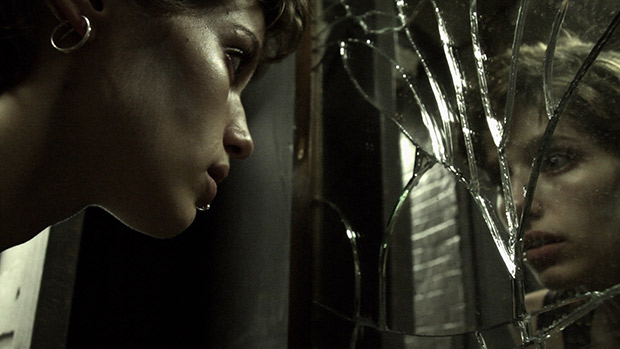 Many filmmakers make a low-budget movie in the hopes of getting to L.A. and working on a big-budget movie. The Rasmussen brothers went in a different direction. Going out to L.A. they wrote and sold a script that was made into The Ward, directed by John Carpenter. But they wanted to do more than just write the script, so after completing their next screenplay they came back to Boston and made the movie Dark Feed on a shoestring.

The Rasmussen brothers, Michael and Shawn, spoke to us recently about this experience, and what they have learned about making a movie on a tight budget. Their next project, Subculture, currently in post-production, was just selected by the Fantasia Film Market to be part of their Off-Frontières Program.

Filmmaker: How did you decide to make Dark Feed yourself?

Michael: We had written both of our first scripts as films that we wanted to direct. We were very fortunate that they were scripts that people liked and that they wanted to make. With John Carpenter making The Ward, we really felt that it was a great opportunity for us to try to raise our own money and make a movie on our own. So we didn’t give the script of Dark Feed to our agent to sell. We just decided that for this project we were going to go out and figure out a way to shoot it on our own.

Filmmaker: What was your plan for funding the movie?

Shawn: At first the idea was to go out and raise something like $500,000 to $2 million to make Dark Feed. After trying to raise money for a year we realized that there was no way we were going to be able to raise that kind of money. I actually remember Michael and I sitting in our local bar — we had raised a fraction of the money that we had hoped to make — and we discussed whether there was any way that we could shoot this movie for nothing using a DSLR camera and pooling resources in Massachusetts.

Michael: We had just started playing around with the Canon 7D, and we were really impressed with the video quality. We decided that we could shoot a sort of Robert Rodriguez, guerilla-style film and stay within our budget. It was really the technology that made it possible; we realized that we didn’t need to have a fancy camera package, and we didn’t need to have a big production. We did it with a very small crew and very limited film lighting. We used a lot of practical lighting that was in place in the facility, so it really came together as we made the movie using what we had.

Shawn: Around the same time Paranormal Activity came out, and that was made for, I think, $15,000. Along with the technology, we were really inspired to just go out and try to make something.

Filmmaker: On the face of it, your primary experience and success was in writing scripts. How did you decide, “We are going to make a movie, we know how to do it?”

Michael: I think it was just blind ignorance. We ploughed ahead and we made mistakes and we learned from them. It was like, “Oh, next time we need to have this in place before we do that.” I think that’s really the best way to learn.

But we met some people in the film industry who had done this before, who we could pick up the phone and call and ask, “What kind of insurance do we need?” We learned as we did. I think you could sit there and get all caught up in the details, but we were just so energetic about getting something done because we had been trying to do this for the last two projects. This one had to go forward. 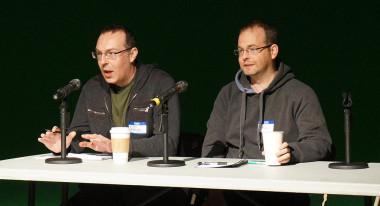 In terms of production, I went to film school so I had done smaller student films before, I had some knowledge in that area.

Shawn’s business savvy has always benefited us, even in the beginning when we went out to LA. Shawn really worked the phones. To get an agent he picked up the phone and started calling, and pitching that we had this script. You hear that you should never cold call agents, but that’s how Shawn got us an agent. That same skill set was what we used to get the movie made; he just started calling people. I think the best way to learn is to ask people who have done it, and that’s what we did.

Shawn: We certainly had a few mentors that helped us out a lot of the way, and we did do a short film prior to making Dark Feed. It was just the two of us with the same sort of thought in mind to make sure that we knew that we could do it.

I think having mentors is very important so that you can ask questions. We had a guy that was really enthusiastic about shooting the movie for virtually nothing. Roger Danchik was the production designer on the film, and he was the production designer on Session 9. He was really helpful because he would call us every couple of weeks and ask us, “Are we going to make this thing or not?” At the same time, he gave us contacts that really helped in the film production side of things, and he gave us a really great piece of advice which was: because this movie takes place mostly in one setting, the most important thing for us was to get that location. Once we had the location, then we could worry about everything else.

We were also very fortunate to get some of the same locations used on Shutter Island.

Michael: I think the short answer is that it was a combination of blind ignorance and surrounding ourselves with skilled people.

Filmmaker: Is there any demarcation of roles between the two of you? How does that relationship work?

Michael: For Dark Feed we were doing everything, there really was no distinction, we just figured out what needs to be done and picked up the slack where it was needed.

Overall, I think the delineation is: Shawn’s more of the business side of the partnership and I’m more the creative side. Shawn is usually the one on the phone, figuring things out and doing the producer role, whereas I’m the one trying to figure out how the equipment works and how to get the best production value for our buck.