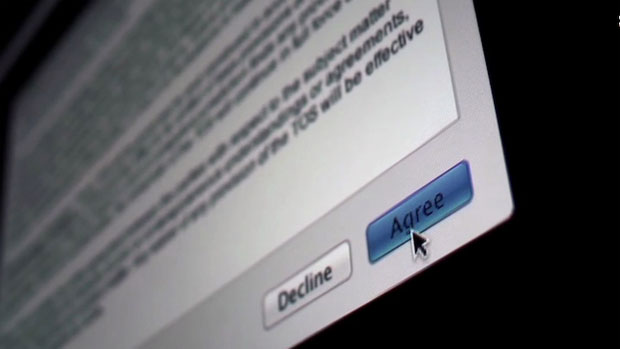 by Brandon Harris
in Directing, Directors, Interviews
on Jul 11, 2013

Every mouse-stroke you make, every search query you use, is being recorded, one way or another, usually by powerful and insidious entities who have no incentive not to sell this information to the highest bidder. Its exchange for copious storage on your web-based email service, and cloud-empowered music players that allow you to play Gil Scott-Heron records, long out of print, night and day, comes a cost that is pervasive and hidden. Your privacy. Oh, and a tremendous amount of monetary value that you likely never knew you created. Shucks.

Cullen Hoback’s thoughtful and, in the age of Snowden, all too revelatory new film Terms and Conditions May Apply suggests that their are no privacy policies worthy their salt.  In the vein of Morgan Spurlock and Michael Moore, Hoback lays out his damning and more than a little unsettling case by making himself the film’s central character. As our narrator and guide through some admittedly obscure legal statutes that are supposed to protect our online privacy and the ways in which they have been subverted post 9/11, Hoback reveals some of the more damning practices of the search and social-media industries with humor, clarity and precision while encountering a wide-ranging group of interviewees from academia, the tech world and entertainment to explain the fallout.

Terms and Conditions May Apply world premiered at this year’s Slamdance Film Festival before making stops at Hot Docs, the Seattle, Dallas, Aruba and Sonoma International Film Festivals; at the last of which, it won a jury prize for best doc feature. It won the same prize at Newport Beach. It opens in Manhattan via Variance Films tomorrow. 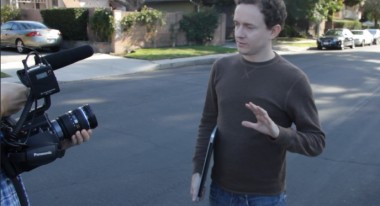 Filmmaker: When did you first become alarmed by the potential of the government and other nefarious forces using information gathered via social media and search in unforseen and troubling ways?

Hoback: “Alarmed” would suggest that it happened overnight. In reality, creating Terms and Conditions May Apply was a slow and scary process of discovery. Each new reveal only took me further and further down the “death of privacy” rabbit hole. However, I will be most alarmed the day that this kind of surveillance overtly interferes with my own journalism.

Filmmaker: How did that feeling grow into embarking on this film?

Hoback: What led me to embark on Terms and Conditions was something that we all carry with us, almost every second of every day — the cellphone.  Some of us even sleep with them at night. I wanted to know how this was changing our brains, habits, and relationships. It wasn’t until I realized that everything in our digital lives comes with a contract — terms and conditions — that I truly knew what direction the film would head. This change of course led me to cut over 20 interviews, and leave a nearly fully cut feature on the editing room floor.

Filmmaker: So the film you initially set out to make was abourt cell phones — what were the most difficult things to discard from that project? Did any of the footage from the initial conception of the film survive?

Hoback: Well, I really set out to make a film about how modern tech was changing us — not a film about cell phones.  So I was able to retain about five interviews, as that general theme still had some relevance to a film about digital privacy. After all, I felt that the loss of privacy and utter destruction of our civil liberties was the greatest change modern tech had wrought.

Filmmaker: Were there interviews that, however eloquent and interesting, you couldn’t find a place for in the film?

Hoback: I had to discard scenes with the Charlie Bit My Finger family, David After Dentist, as well as an interview with Sugar Ray Leonard. There were also countless stories that were cut, including one about a man who had become a cyborg, and a kid being spied on by members of the faculty at his school while he was at home sleeping. They just didn’t fit into the arc of the film.

Filmmaker: Did you always plan to make yourself a character in the film, leading through the narrative a la Michael Moore, Morgan Spurlock, etc., or was that a device born of necessity?

Hoback: More born out of necessity. When I realized that the only way to get an interview with Mark Zuckerberg (or anyone at Facebook after repeated attempts) would be to go to his house, that insertion of myself then prompted a bit of reverse engineering. But since I had much more to shoot, this insertion wasn’t overly complicated. And since I had been adding elements of narration while I edited, deciding to use my own voice ended up being an easy choice.

Filmmaker: You rounded up an incredible group of subjects, from Moby to Margaret Atwood to Ray Kurzweil. Who were the most fascinating subjects you encountered?

Hoback: I basically created a list of people I wanted to speak with, then pursued all of them with reckless abandon.  You certainly named some of the most recognizable subjects, though Eli Pariser, Chris Soghoian, and Sherry Turkle were some of the most eloquent and spoke to the heart of the film.

Filmmaker: Was Kurzweil already employed by Google when you spoke to him?

Hoback: Ray Kurzweil had already founded the Singularity Institute, which was done in collaboration with forces from Google. Though Google takes a lot of hits in the film, I think Mr. Kurzweil doesn’t concern himself with the present outside of ways to further his vision of the future. So almost any chance he gets to explain his theories about the exponential growth of technology, he seems to take.

Filmmaker: What were the most challenging aspects of the film to make work in the editing?

Hoback: Cutting, recutting, throwing an entire cut away, then forcing myself to go back and virtually shoot an entirely different film than what I set out to make, that was rough. The film took me over 2700 hours to edit. Also, I tried Final Cut X in its infancy — what a mistake.

Filmmaker: Have you encountered legal difficulties surrounding the use of logos from these various corporations?

Hoback: We worked with the law firm Donaldson and Callif for our fair use clearance. They’re the best. Without them, this film couldn’t exist.  We haven’t run into issues with fair use… yet.

Filmmaker: What do you think about Jaron Lanier’s notion of making large social media and search companies pay their users microfees for profiting from their information?

Hoback: I think our information/data should be considered ours, not the companies’. Data access and data control should be a right. If we want to grant a company our data in exchange for some cash, that should be the choice of the user. It at least reveals that our data is worth money.

I should also note, we’re working with Demand Progress, and have launched a campaign to get as many Congressmen as possible to watch the film. I don’t think the folks on Capitol Hill even truly understand the nature of how these systems work. To petition your representative to see the film, visit trackoff.us

Filmmaker: Have the revelations about N.S.A. and PRISM’s use of metadata drawn from cellphone and social-media companies surprised you? Ironically, do you suspect it will help the film?

Hoback: To be honest, I was surprised the PRISM and Verizon leaks are considered revelations at all. These are just the tip of the iceberg, and I think the film goes much farther to not only show how we got here, but the deeper intent. But will it help the film? Before Snowden, the film served as the whistleblower; now Terms and Conditions has become the answer to why these “revelations” matter. I think critically we may see some slight blowback as not going far enough; but hey, I finished the film five months before any of this. If it brings more attention to the issue, then we may actually see some real change.