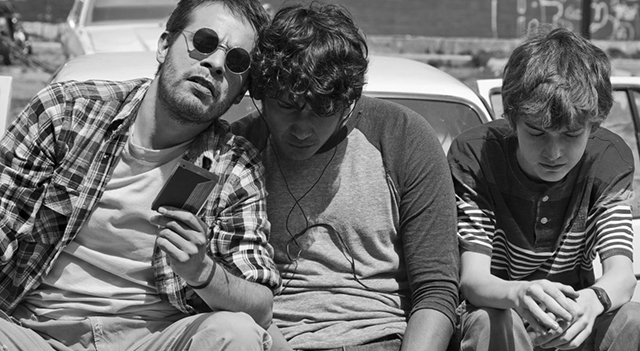 by Sarah Salovaara
in Directing, Filmmaking
on May 1, 2014

Much like the counter-movement it depicts, Alonso Ruizpalacios’ Güeros is built upon a series of elements that slyly double back on one another. Smartphones in 1999, remnants of behind the scenes footage to break the third wall, a road trip through town, and handheld camerawork to counteract otherwise formal rigor all comprise this tale of three young men in the midst of a Mexico City National University upheaval.

Troublemaker Tomás (Sebastián Aguirre) is sent South by his mother to live with his dissident, often lackadaisical brother Sombra (Tenoch Huerta) and his best friend Santos (Leonardo Ortizgris). Wasting the days away in their concrete compound, the three become fixated by a cassette from enigmatic recording artist Epigmenio Cruz, whose music is said to have made even Bob Dylan teary-eyed. Learning of his hospitalization, the trio take off in their Atlantis, eventually picking up the impassioned, alluring emblem of the student strike, Ana (Ilse Salas), while winding their way through the precarious city.

A wry, visually audacious film that favors language over politics, Güeros was one of the standouts of the 2014 Tribeca Film Festival, where it took home the prize for Best Cinematography in a Narrative Feature. Below, Ruizpalacios speaks about depicting a fervent movement from level ground, and how narrative and execution best inform one another.

Filmmaker: The central trio are essentially on a road trip to nowhere. How does the cyclical nature of their quest tie into the film’s framework and the strike?

Alonso Ruizpalacios: It’s true there are cycles in the film — the whole story is bookended by two similar events involving objects falling from the sky — first the water balloon, which sends Tomás to Mexico City to stay with his brother Sombra — and then the brick that’s dropped from the bridge and lands on the car’s windshield, which leads them to accidentally find the bar where Epigmenio whiles away his final days.

However, I think it is also a story of breaking cycles: during the writing process me and Gibrán [Portela], my cowriter, came to a similar standstill as the one in which the characters start off — one of stasis and anguish — from where it seemed we would never escape procrastination and beer, never finish the film. In fact, that same state was the actual starting point for the film — the need to grow up and out of the warm oozy hole of a carefree teenage life and into…I guess adulthood. And, as always in coming-of-age stories, we realized — for ourselves and for our characters — that the only way out was through. The whole “rolling stone gathers no moss” attitude kept our fingers tapping on the keyboard and back into movement. Just like that, for the mere sake of movement, of keeping on keeping on, Sombra and Santos go from stasis back to movement. They leave their apartment and venture into the wild city. They come back to life.

Filmmaker: There’s an emphasis placed on language and it’s misuses. Not only is güero incorrectly applied, but many derogatory words are seemingly nonsensical. Why? Do you find this is an effect not wholly grasped by international audiences?

Ruizpalacios: Every single story you can think of has important elements that get lost in translation. There’s nothing to be done about it, it’s part of the charm of storytelling, I guess. However, yes, this is a particularly Mexico City idiosyncratic film that deals with lots of terms and name-calling that seem very local (though I’m not convinced that they really are).

When we were finishing the final cut just in time for the Berlin Film Festival, I had a last-minute revelation as we were about to press the “send” button on the computer: “Wait! What if nobody overseas understands what ‘güero’ means? We’re completely fucked!” And so we quickly looked the word up in several dictionaries and added the definition at the very beginning of the film. As we saw the whole thing playing one last time, we realized that that was a statement in itself and we had to keep it for the Mexican version as well. In other words, terms like “güero” and “naco” (its sort-of counterpart) are thrown around everyday in Mexico City and nobody ever stops to wonder what they really mean, what you’re really saying. They are strong words, charged with the desire to place a barrier between you and the other — whomever the other might be. Don’t get me wrong, the film is not an anthem against social segregation or a plea for racial understanding (although that would not be half bad), it’s just saying, “This happens everyday. It exists. We are an elitist, racist people. And it goes both ways.”

Filmmaker: Can you speak about your cinematographic choices? Beyond the black and white 4:3, the camera maintains an interesting balance between formal, composed still frames, frenetic handheld, and push/pulls.

Ruizpalacios: Again, the whole visual concept goes back to the main concept of the film: the change from stasis to movement. It was important for the camera to help in creating these atmospheres. After the frenzied prologue — where Tomás throws the water-balloon at the mother and her baby — the camera hardly moves in the first third of the film. With long static shots, it accompanies the characters in their limbo. But as soon as they are forced out of their apartment by their angry neighbors, the camera literally comes off the tripod (you can actually hear it snap) and becomes free again. Jump-cuts set in and completely change the atmosphere. The camera almost becomes the curious eyes of Tomás looking at the big city with wondering eyes.At least that was the idea…

Filmmaker: Why the particular backdrop of 1999 Mexico City? It feels like a very personal film, were you a student at the time?

Ruizpalacios: The strike of 1999 was a big event in Mexico, which marked my generation the most, as it was kids my age who were university students at the time. (For those readers who don’t know, it was basically an eleven month-long strike that started when the National University’s dean tried to — among other things — start charging tuition fees in what was essentially a free institution). Paradoxically, it is seldom talked about anymore and, to my knowledge, it hadn’t been dealt with in fiction before. Having said that, my film does not attempt to be a faithful chronicle of those times. In fact, when looked at closely, one realizes that the time-frame of the film is unspecific. That’s one of the big reasons we chose to shoot in black and white: we wanted there to be obvious echoes with the strike of ’99, but at the same time we wanted to have enough freedom to deal with it the way the story demanded, rather than what History dictated. You see old props and objects from back then — like the Walkman or the Atlantic car they race around in — but at the same time you see the rich kids using smart-phones and the boys riding around really modern parts of Mexico that weren’t around back then.

Back to the strike: Everybody I knew was affected by the ’99 strike in some way or other — either because they were a part of the movement –- and so they saw their lives change completely as they became political activists, living inside the university campus — or because they were opposed to it and carried on taking extra-mural classes, going to anti-strike meetings, or deserting for other schools. But there was a third group — to which me and my closest friends belonged — who, amidst all the chaos and confusion and the social rage (there was a lot of rage!) could not make up their minds. I was always interested in this movement, but more for social than political reasons. It seemed to me to stir up and hit the nerve on many of the key social problems in Mexico. I’ve never been much of a political activist — I always think too much about the pros and cons of the movements that have slipped by me, and when I finally make up my mind, they have passed. I thought the most honest way to talk about this was to do it from that point of view.

Filmmaker: Ana and Epigmenio are both voices that ultimately elude Sombra. In political movements, when so much is espoused impersonally, at a distance, we see the figurehead crumble up close. Would you say this is one of the ultimate purposes of the boys’ trip?

Ruizpalacios: I think the boys’ journey through Mexico City represents a quest for the infraordinary, rather than the extraordinary. Something that is meaningless to everybody else — like meeting an unsung childhood hero — is what gives them a sense of purpose and a drive. They feel adrift amidst the masses that have — as you say — espoused these big political ideas for themselves, and they find comfort and meaning — not in that which they were looking for — but that which they had all along: each others’ company. Particularly the two brothers: they realize they’re not quite alone.