Manakamana and Nonfiction’s Power of Contextualization 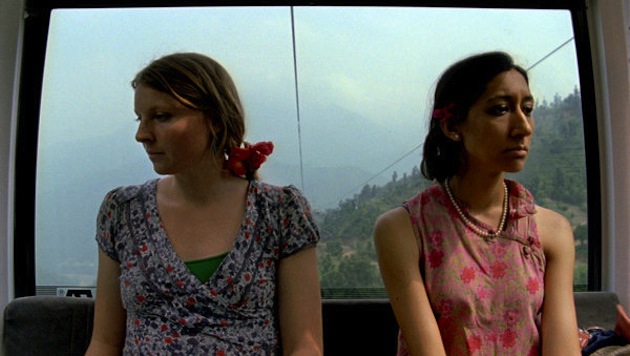 by Sarah Salovaara
in Directing, Filmmaking
on May 8, 2014

Yesterday, the upstanding people at Cinema Guild decided to release their catalogue of DVD supplemental essays online. It’s an embarrassment of riches: Amy Taubin on Beaches of Agnès, J. Hoberman on The Turin Horse, Haden Guest on Cousin Jules, to name a few. At my first, tepid perusal, however, it is Robert Koehler’s essay “Sweetgrass and The Future of Nonfiction Cinema,” that merits the most attention.

Koehler begins by addressing the myth of the “death” of cinema in the new digital environs, countering that we are in a peculiar renaissance of the documentary. He considers the newfound multiplex popularity of the form, with films like Fahrenheit 9/11 and Super Size Me, which were sullied by, as Albert Maysles would say, the desire to mimic “movies” with their gimmicks. He speaks of a renaissance that is purely economical and zeitgeist-friendly in nature. While such a style is promulgated in the pop cultural sphere, on the more niche festival circuit (BAFICI, Belfort, Jeonju, etc.), an “‘observational’ or ‘objectivist'” trend emerged, that “[represented] the ideological and formal opposite of the Sundance world.” Against the backdrop of even narrative filmmakers like Apichatpong Weerasethakul, Lisandro Alonso, Lav Diaz, Kelly Reichardt and Lockhart, “whose films tend to dissolve fiction and nonfiction, with nonfiction driving the vehicle rather than the American commercial documentary being driven by the Hollywood bus,” Koehler finally brings Lucien Castaing-Taylor and Ilisa Barbash’s Sweetgrass into play.

Koehler presumably wrote the essay in 2009, if not 2010, when Sweetgrass made its way to DVD after a lengthy run on the festival circuit. And yet his discussion of Castaing-Taylor as a self-identified “recordist” (not “director” or “cinematographer”) is one that persists in the work of his Harvard Sensory Ethnography Lab colleagues, notably Stephanie Spray and Pacho Velez’s Manakamana. Koehler writes of Sweetgrass that “the central idea […] is that the subject is recorded and observed almost purely through image and sound […] but with considerable research and understanding of the cultural and political realities informing and affecting that subject.” The exact same description could be applied to Manakamana, which examines both the intersection and distinct realms of religion and topography as they relate to people in transit.

Breathtakingly economical, the fixed, observational camera records the anticipation — and, at times, casual decompression — that accompanies the trek to and from the titular temple. Perhaps the most stunning rides both occur on the descent, one after the other. The first sets two young women at the southern end of the cable car, such that the verdant foothills are hardly noticeable until one makes a comment about her distaste for climbing them. They seem to be rappelling down into nothingness against the clouds. For a while they don’t speak: they steal glances at one another like strangers, presumably lost in thought. Minutes later, the jovial white American tourist is snapping photos of her companion and drinking from her water bottle, careful not to press her lips to the rim.

Words of her parents readily contextualize her visit to Nepal, almost repulsively so. By this point, you have grown to cherish the ten intimate minutes spent with each of the film’s subjects without any holistic sense of who they are. That observational order is disrupted by this woman who, against her forbears, seems to talk for the sake of it, reminding us just how trivial our exchanges can be. That this segment is followed by two older women, whose intimacy is conveyed through messy ice cream consumption, only furthers the point.

They speak only when essential: the younger tells the elder it is time to eat, the elder begs for her plastic back to catch the drips flowing down her arm. Sitting on the north end, we can clearly see the green grooves in the hills, the steep angle of the wires that transport them. But most of all, we can see the power of context, the ability of Manakamana to reframe and scrutinize the meaning of interacting with others, with ourselves, and with whatever destination we may be headed towards. Such loftier “cultural and political realities” are understood, but never pointedly expressed. As Koehler says, “the subject is recorded and observed almost purely through image and sound,” and it is all the more powerful for it.