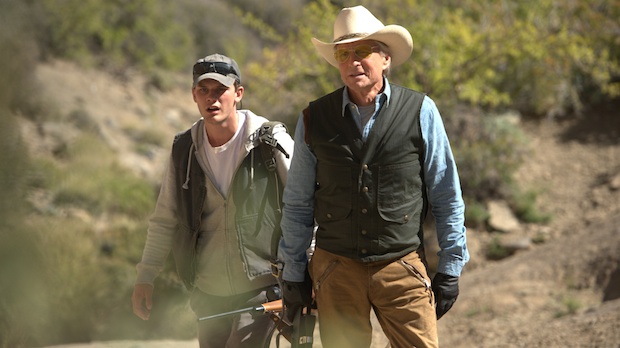 by Scott Macaulay
in Directing, Directors, Filmmaking, Interviews
on Sep 6, 2014

After screening his debut feature, Carre Blanc, at the Toronto International Film Festival in 2011, French director Jean-Baptiste Leonetti returns to the festival to world premiere his latest, The Reach. Described as a cat-and-mouse thriller about a corporate shark and the young guide he hires for a hunting trip across the Mojave desert, it stars Michael Douglas, whose capacity for embodying and, through his performances, critiquing American greed is unquestioned. Below we ask Leonetti about Douglas, maintaining tension in a two-hander, and the differences between French filmmaking and American.

Filmmaker: In both this film as well as Carre Blanc, class plays an important role. What attracts you to stories depicting class-based relationships, and why do you think awareness of class tensions is so often missing in American films?

Leonetti: A lot of people told me that Carre Blanc was a political movie. But I made it because this was a love story. A love story in a dystopian world very violent. But mainly this was a love story.
The Reach is much more political. This is a brutal metaphor about the power of money. How it ends up corrupting everyone. I don’t know if there is no awareness of class tensions in American films. But I’m sure about one thing: the American dream doesn’t like class tensions. It doesn’t fit it. I mean, the real American dream in his epic way — when a guy fights against all for his dream.

Filmmaker: How did you become involved with this project, and what was most different for you working in the U.S. system?

Leonetti: Thanks to the Carre Blanc selection at TIFF, a lot of producers saw it. Robert Mitas at Futher Films liked it a lot it and called me. He gave me the script of The Reach. I understood immediately that this was perfect for me. A survival, dark modern western. Then I met Michael Douglas. One year later I was in pre production.

Filmmaker: Michael Douglas has played so many iconic roles in which he has embodied social, political and, in the case of Falling Down, economic tensions. How would you describe him as a character in this film, and in what way is his character here a man for our times?

Leonetti: When Michael Douglas was joking about his character he said, “This is ‘Gordon Gekko, West Coast.” I would add: a “Gordon Gekko West Coast” with a big gun. But beyond an action movie there is an other approach. The movie shows how the Michael Douglas character is alone. All this money, all this power and all this loneliness. That’s why definitely, this is a man for our time.

Filmmaker: What cinematic techniques did you employ to heighten the tension in this film?

Leonetti: A lot of close ups and a lot of wide shots. I wanted each close up of Michael Douglas and Jeremy Irvine like a big landscape. I wanted to feel the craziness and the fear in their gazes with a lot of flare, dust and sweat. Then I shot the desert like an empty city.

Filmmaker: Who are your biggest inspirations as a filmmaker?

Leonetti: William Friedkin, Stanley Kubrick, Sam Peckinpah, Alan J. Pakula. I learned the cinema with them. And when I’m lost in my creative process, I think of them.