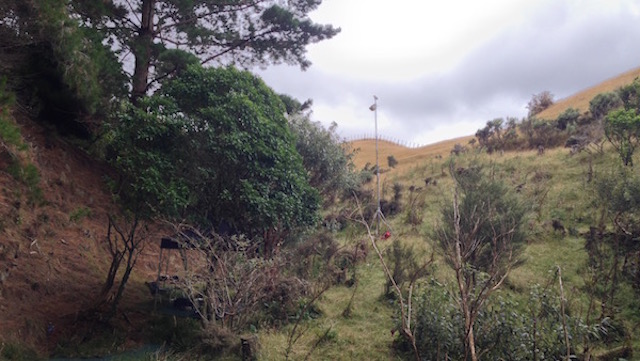 On the Set of Pete's Dragon

by Sarah Salovaara
in Directing, Filmmaking
on Feb 9, 2015

David Lowery doesn’t necessarily dole out directing tips in his production diary for the upcoming Disney remake of Pete’s Dragon, but they do seep through in the details. Currently on day 11 of 70 of the New Zealand-based production, many of Lowery’s entries touch upon the fluidity of the filmmaking process. Most recently, he recounts nailing a precisely planned sequence, only to forfeit his original design for another:

Today we were back in the woods at Battle Hill, shooting a sequence that I’d planned out very carefully last summer and had no interest in altering. It was two shots, with a very precise cut point, and a camera move that required counting out loud to get the timing right. We got it exactly as I’d intended. I cut it together there on set and it worked fine and so we we moved on to the next shot, which I’d also planned out somewhat extensively. It was designed to be a long, long shot, and we’d given ourselves the rest of the day to nail it.

Two takes in and it was clear that nailing it wasn’t really an option – that one shot needed to be two, and by the end of the day it became four, and those four when cut together will work far better and with far more grace than whatever strained result the original plan might have yielded. I made quick work of letting go; basically, the movie called me out for trying to get too fancy.

Though the crew takes in “big screen dailies” at the end of the day, Lowery skips the viewing party one evening to edit together the first two days of footage so he can cover his tracks:

I skipped dailies today to hurry home and whip up a rough cut of the past two days of shooting. We only have one day left for a key scene and I started to get worried today that we weren’t going to get everything we needed. I realized in the process of bashing it together that I haven’t edited anything in a really long time. I’m a little bit rusty, I think. We’re cutting the movie in Avid, but I used Premiere for the sake of speed and as I instinctively hit all my old key commands, I felt a bit of remorse for the passing of Final Cut 7. I really need to let go at this point…

Editing together what we’d shot over the first two days of this sequence was incredibly helpful. There were a few missing pieces we needed to get, and a few shots – a reveal here, an interaction there – where I felt we could do better. And we did. It also reminded me why I can’t edit while shooting: I’ll never, ever sleep.

There’s also a worthwhile reflection on directing characters that aren’t added till post, with some help from David Fincher:

I always keep in mind something David Fincher said in regards to Benjamin Button, about how as soon as you treat your special effect like it costs sixty grand per shot, it stops being special and starts calling attention to itself. The way to make it work is to bury it in the frame and let it go out of focus. It still costs the same, but it ceases to be precious and therefore feels more real.

And this, which I’m posting in full, on the trials of shooting out of sequence:

You write all these scenes and each one builds upon the next in a very specific way. Then you start to conceive of how you’ll shoot them and figure out how individual shots will highlight that crescendo and visually underline the emotions you put on the page. And then one day you’re on set, an hour away from lunch and you’re about to shoot one of those shots – a very specific one which will be the culmination of 90 minutes of emotion you have absolutely not filmed yet. Your head spins and you feel like you don’t have a grasp on what it is you’re doing, and so you think about the shot, and break it down into mechanics – the camera starts out here, for starters, and winds up there, and maybe if you shoot at 33 frames per second it will give you a little bit more of that feeling you’re looking for, and if you move a second fan over here you’ll get the wind to move that lock of hair just so as the camera passes betwixt its marks. You create this very mathematical context and then you throw an actor into it and all they have to do is turn their head just so and think the right thoughts and you roll the camera and an entire imagined history suddenly reaches its apex right there in front of you. And from that point forward, you’re working backwards just as much as you are forwards.

All in all, it’s chockfull of insightful, real time reflections, well worth keeping up with, especially from a director who, six years ago, was making $12,000 feature in his home state.