by Lauren Wissot
in Directing, Directors, Filmmaking, Interviews
on May 13, 2011

I first met Zach Clark last October when his excitingly subversive, sex-scene-less SXSW hit Modern Love Is Automatic opened Pornfilmfestival Berlin (where my own short The Story of Ramb O had its premiere). Since we barely had the chance to chat in the buzzing, jam-packed Moviemento hub, I was thrilled when I heard recently that Clark’s follow-up Vacation! (pictured above) was already on the festival circuit and would be playing theatrically at Brooklyn’s own reRun Gastropub Theater in May. Finally I had an excuse to find out what makes this offbeat yet seemingly well-adjusted director of a feature about a nurse who moonlights as a dominatrix, and now a flick about four chicks whose weekend getaway goes bizarrely awry, tick.

Vacation! plays for one week at reRun, beginning tonight, May 13.

Filmmaker: In terms of aesthetics, both Modern Love and Vacation! inevitably conjure up comparisons to John Waters and even John Hughes. But beyond these two cult directors who and what are your influences? (Obviously, the ’80s in general factors in there somewhere.)

Zach Clark: I have very clear childhood memories of being at the video store in the Outer Banks for family vacations and looking at the lurid oversized VHS boxes. The cover for Color Me Blood Red is especially burned into my brain. It’s got a girl strung up on a wood-paneled wall with her guts hanging out. Years later when I figured out that I wanted to make movies these memories stuck, and the movies I really loved at first (and still love) were what I think are best called “trash.” So for a while I only wanted to make trash. Then I went to film school and I got into the Hollywood auteur stuff from the ’40s and ’50s and ’60s and European art house stuff, etc, etc. I always come back to those three things and I think they’re all in Modern Love and Vacation! and they’ll all be in the next thing I do, too. Douglas Sirk was really important to me when I made Modern Love. ’60s beach party movies were big for Vacation! but so was ’80s new-wave porn like Café Flesh and those depressing blogs of pictures of hipsters at parties. The color palette is just the Outer Banks. It’s very pastel-y and neon there. I once spent a week working on the script while staying in the house where we shot the movie and the only movies I watched were Days of Heaven and Berlin Alexanderplatz. The cover for the Contortions Buy album was also really influential. Maybe that says it all.

Filmmaker: That’s quite an eclectic mix. And considering all your films have incredibly high production values I was quite surprised to learn just how low your budgets are. What’s your secret?

Clark: Luckily, I have talented friends who have been willing to work for no money. I also like making movies in places that aren’t big hubs of film production, which keeps costs down, so a small crew coming into a business for a few hours is a novelty and not a nuisance. It also helps to work fast. We shot most of Vacation! in two weeks. If we’d shot any longer, I don’t know that we’d have been able to do it. We shot Modern Love on weekends over the course of six months. Both of these schedules were necessities of the budget. I also don’t shoot that much coverage, or that many takes, which helps move things along. 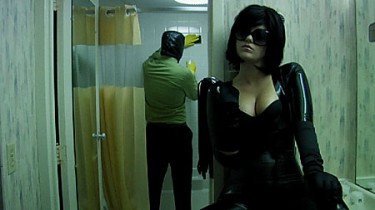 Clark: Everyone’s a little queer, right? It’s hard to say why you’re attracted to something. That may be a better question to ask my parents (though they might not know either. I asked for leopard print curtains for Christmas one year in high school). But I think part of it comes back to what I said earlier about “trash.” Transgressive sex and sexuality have always been the stuff of smut (which I do not use as a pejorative term), but I like to present that material in a (hopefully) less exploitative way. Vacation! intentionally has no labels in it — the words “lesbian” or “bisexual” or their euphemisms don’t get spoken — but it’s one of the first things that gets talked about. People like labels, they wanna be able to say “she’s gay” and “she’s straight” but I don’t think that’s the point and I don’t think that gets us anywhere. And actually, I wouldn’t say BDSM was one of the themes of Modern Love, and I wouldn’t say bisexuality is one of themes of Vacation! In both cases, those are things that the characters participate in, but the movies are ultimately exploring other stuff. Vacation! is as much a movie about bisexuality as it is a movie about sunscreen, friendship, blonde wigs, Corona, death, electronic music or a guy in a gorilla costume.

Filmmaker: Fair enough! So what future filmmaking plans do you have? Considering you work with the same cast and crew are you out to build a John Waters, Dreamlanders-style collective?

Clark: I’ve got a new script for a Christmas movie that’s a little bigger than the last two. So we’re gonna try to put some money together for that. I definitely like working with friends, and a lot of the time I specifically write parts for them but I also think it’s really exciting and challenging to work with new people, too. I try and give myself new challenges to overcome with each new movie to make myself step outside my safe zone. I see a lot of the same kinds of movies being made every year and it’s boring. Indie filmmakers can be just as bad as Hollywood, and film festivals can be just as bad as multiplexes. But it’s easier to make movies that way, so it makes sense that we see a lot of it. So hopefully I’ll keep working with some of the same people, but not making the same movies.