by Lauren Wissot
in Directing, Directors, Filmmaking, Interviews
on Nov 7, 2011

Jesse Baget’s Cellmates (originally titled White Knight) was one of my top picks at this year’s Arizona Underground Film Festival – and the biggest surprise of the fest simply because when I read the feature’s synopsis in the program my first thought was there’s no way this film would work. When one sees the phrase “buddy comedy” the names Tom Sizemore and Stacy Keach just don’t come to mind. Add in Héctor Jiménez of Nacho Libre and we might be getting closer…but still. Sizemore as a former Klansman meets Keach as a potato-obsessed warden meets Jiménez as an activist immigrant laborer (set in a Texas prison) sounds like a recipe for disaster. So it’s a testament to the sharp talent of Tucson-native Jesse Baget and his co-screenwriter Stefania Moscato that Cellmates not only shines as a hilarious comedy, it doubles as a sweet-natured satire on racism. I chatted with Baget (pictured above on the set of Cellmates with Tom Sizemore) shortly after I covered the Santa Fe Independent Film Festival, where Cellmates was once again met with enthusiastic applause.

Filmmaker: Can you talk a bit about the genesis of the film? How did you come up with the idea to do a jailhouse buddy comedy about a former KKK grand dragon and an immigrant laborer? 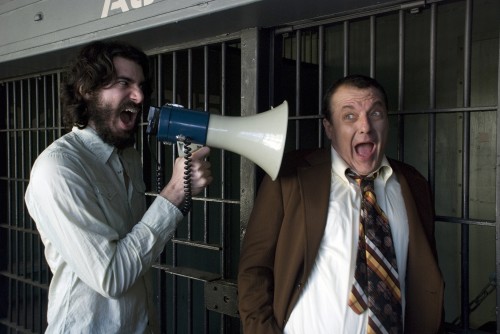 Jesse Baget: I like coming up with challenges when I write. The challenge of sculpting a story around an unlikable racist character was appealing. I wanted to start the film with a character you can’t possibly sympathize with, and hopefully by the end of the story you grow to root for. You see stories humanizing serial killers and assassins constantly, but racism is usually shied away from. In my opinion the more people are afraid to confront or discuss this aspect of our culture, the more racism can drive us apart.

Growing up in Arizona I was aware of the prejudice and controversy concerning immigrants. I wanted to get people talking about this difficult topic, and felt that exploring it through the humor of a buddy comedy would create an easier venue to start a conversation.

Filmmaker: As a New Yorker I was unaware that Tucson has such a thriving arts scene – yet I rarely hear of any filmmakers hailing from Tucson. So I was surprised to learn that you’re a native. Any guesses as to why Tucson is such a well-kept indie secret compared with, say, Austin?

Baget: That’s a good question. Maybe it’s just too damn hot! My parents are both artists (my dad a photographer and my mom a writer) so I suppose I grew up in the Tucson art scene to some degree. There’s certainly no shortage of talented people there. Living in L.A. I’ve actually connected with several other filmmakers who grew up in Tucson. Dave Boyle who directed White on Rice went to a high school near mine.

Filmmaker: I have yet to see your previous film, El Mascarado Massacre, but from what I gather from this Mexico-set movie, and the Tuna, Texas location of Cellmates, growing up in the southwest has had a profound effect on the stories you choose to tell. Can you discuss this – and how living in L.A. is now influencing your work?

Baget: It wouldn’t seem to me that growing up in the desert has affected my films. Although one could argue that, given that all the films I’ve made so far have taken place in a desert. The setting of my last two films (Cellmates and Breathless), which both take place in Texas, has been influenced by mine and Stefania’s love for southern dialogue. There’s poetry to the American southern dialect that is attractive to us, especially since we write character-based pieces. Growing up in Arizona didn’t necessarily influence this (since in reality Arizonans don’t speak with a strong southern accent, although that’s how they’re frequently portrayed in films).

I sincerely hope living in Los Angeles doesn’t influence my work. I don’t want to become one of those filmmakers who makes films about people making films.

Filmmaker: The other delightful surprise for me concerned the casting in Cellmates. You’ve got three stellar “name” actors – Tom Sizemore, Stacy Keach and Héctor Jiménez – who I never could have predicted would have the chemistry and comedic timing that they have together. How did this ensemble come about?

Baget: It was the exact casting I envisioned while writing the piece and the performances came together as amazing as I had hoped. The roles in the film were written specifically for Héctor Jimenez and Tom Sizemore because I knew them personally and hoped they would commit to the film. While we had Stacy Keach in mind for the role I had no idea if we could get him. Luckily he responded to the material and agreed to do it. The other roles in the film were also written with Kevin Farley and Olga Segura in mind. So it was really easy to cast, not a single audition!

Filmmaker: Speaking of idiosyncratic casting, can you fill us in on your latest projects? I keep seeing your name associated with heavyweights like Robert Duvall, Mickey Rourke, Ray Liotta, etc. You must have to pinch yourself every day during production.

Baget: My last movie Breathless is a dark comedy about a woman who accidentally kills her husband while trying to find out the whereabouts of one hundred thousand dollars resulting from a bank robbery. When she calls her best friend over to help her out the two women race against the clock to dispose of the body before the authorities show up at their door. It’s a fun, edge-of-your-seat thriller that will be released early next year. Working with Val Kilmer, Gina Gershon and Ray Liotta was definitely a thrill. Val Kilmer is a childhood icon! I also had the pleasure of working with the amazingly talented Wayne Duvall on this film. He gives an incredible performance as a private investigator looking to get his hands on the stolen money.