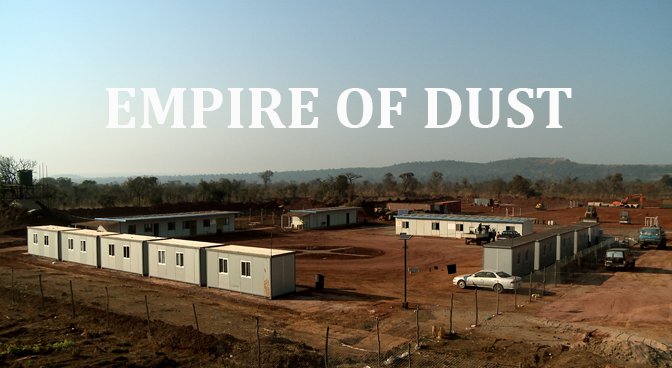 The vast wilderness of the Democratic Republic of Congo (DRC) is a world away from the urban centers of China. Yet it is there that greater numbers of Chinese engineers are doing business. In the documentary Empire of Dust, featured in the “Panorama” section of this year’s International Film Festival Amsterdam (IDFA), director Bram Van Paesschen explores the fraught relationship between the Congolese and the Chinese, as shown through their efforts to build a road between two major cities in the DRC.

In 2007, China and Congo signed a massive resources-for-infrastructure deal with projected revenues of $40-$120 billion. China endeavors to take on a wide range of development projects (including roads, hospitals, schools and airports) to be paid for by Congo’s immense copper and cobalt reserves. Though a promising deal for the Congolese– the majority of whom live on less than $1.25 a day– the deal’s lack of transparency has made it the subject of scrutiny for human rights organizations. Empire of Dust examines the human aspect of this exchange.

Director Bram Van Paesschen zeroes in on two employees of the China Railway Engineering Company (CREC): Lao Yang, the company’s Head of Logistics; and Eddy, his Congolese translator. The two visit construction sites around the country, overseeing a project marred by cultural misunderstandings. To make matters more interesting, Van Paesschen hails from Belgium, who under King Leopold II subjected Congo to one of the most brutal colonizations in history. Empire of Dust is a day-by-day account of globalization at work, wryly observed with humorous interstitials from a Congolese radio DJ invented by Van Paesschen himself.

Filmmaker sat down with Bram Van Paesschen in Amsterdam to talk about the inspiration for Empire of Dust, the implications of the China-Congo deal, and the future of the DRC moving forward. 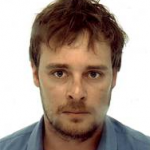 Filmmaker: Was it your country’s history in the Congo that sparked your fascination with the subject?

Van Paesschen: It was kind of an accident. I never had this interest in Africa in general. I was working for television, and after I made a successful documentary for them they said, “Choose a subject. What do you want to do?” And I was like, “Oh, I don’t know.” (Laughs) So I went looking and I saw these buildings of these ancient Belgian mines, this rusted high-tech machinery from the ’30s. And they were these really beautiful, post-apocalyptic images. So [my fascination] came from there. And then I made a movie about Congolese miners [Pale peko bantu mambo ayikosake (Wherever There are People, Problems are Never Lacking)]. And when I was finishing that film, all of a sudden I saw this Chinese bloke standing in the middle of the road with a land meter. And I was like, “What’s that all about?” So I got fascinated by this new image and this new movie came about.

Filmmaker: Were the Congolese weary of you at first?

Van Paesschen: That’s really perverse in a way, because the question I hear from them all the time is, “Why did you leave us? When are you coming back?” You have to understand–and this is a major part of why the country isn’t working–at the end of colonization, the Congolese weren’t allowed to develop. [It’s true that] there was no more slavery, there was no more chopping off hands, and they got churches, they got football fields, they got food. They just had to listen to what they were told and they had a good life–to a degree, of course. But when the Belgians left [the Congolese] had to look out for their own, and they never learned. It was a textbook example of paternalism. They weren’t starving back then when the Belgians neared the end of their colonization. Now they are. So fifty years later, many Congolese people tend to idealize the colonization period.

Filmmaker: That is somewhat perverse.

Van Paesschen: Yeah, I keep telling them that it wasn’t all good. “We exploited you, yeah?” So instead of defending myself I have to attack myself. (Laughs)

Filmmaker: I understand that the Chinese are very private about what they’re doing in the Congo. As they have been pressured by human rights groups to make their contract available to the public, they’ve refused. Did you encounter any reluctance from them to participate?

Van Paesschen: Oh yeah, it was horrible! I first wanted to make a documentary about two Chinese people working in the mining business, two brothers. But during the process of filming, they threw me out because they got pressure from the Chinese community and the Congolese government. They were operating in a grey zone between legality and illegality with the mine, paying off government officials all the time. But luckily they were setting up camp with the China Railway Engineering Company (CREC), so I asked their spokesman [if we could film there]. And he said, “Yeah, of course. If you get the permission from the Congolese Minister of Internal Affairs.” Normally it’s impossible, because [the Minister] thinks of himself very highly. And he kept me waiting in the waiting room for three days.

Van Paesschen: Yeah. But when I finally went in, we made a friendship and [he agreed to let me shoot]. After a week though the site manager was already pushing us out. So I flew over a Chinese friend from Brussels, and he smoothened out the relations in the camp so we could stay for a month longer. So it was a really stressful shoot, the most stressful I’ve ever had.

Filmmaker: I was struck by the film’s comedic tone. Reading the synopsis, it’s almost framed like a buddy movie: two people from different cultural backgrounds are forced into an alliance with each other and the antics ensue. Of course, the implications of the Congo-China deal are quite serious for the Congolese. Can you talk about the tone you wanted to adopt in the movie?

Van Paesschen: There are some documentaries about the Chinese presence in Africa that exist. But what I found frustrating about the ones that I saw was that they seemed to see the Chinese as a whole, not as individuals. And I wanted to make a difference and really go for the individual. Strong characters was my main [goal] when I started the project. And when I first saw the rushes of this Congolese man [Eddy], I thought it was quite hilarious actually. So I said, “Okay, we’re going to focus on these misunderstandings.” I also found the triangle interesting: a European filmmaker coming to Africa to make a film about Chinese people. It was really a cultural melting pot in a way. (Laughs)

Filmmaker: The absurdity of that exchange is completely laid bare. You don’t really take a step back to analyze the larger project at hand. Why did you opt for a more observational approach to the subject?

Van Paesschen: It’s because I’m aware that there are a lot of other films about the subject. You can find more information about the broader project just by looking at the internet, for example. But you don’t get to know the people by looking at the internet. So for me it was bearing that in mind and making a film for an audience that I want to be intelligent. I don’t underestimate my audience. I think they’re all intelligent people. So I hope to interest them in the subject. If they don’t know something about it, I hope to interest them in the subject so that they can have their own process. Or if they know about it already, I want to give another insight, something that hasn’t been seen before.

Filmmaker: Your film depicts many racist exchanges between the Chinese and the Congolese. It makes you wonder how they’re able to co-exist and, to some extent, get work done.

Van Paesschen: I must say that there are other countries investing in the country—Canada, the United States, Australia and South Africa are some of the main players. They are quite crude and racist too, but they hide it. They make these partnerships with NGOs and pretend they care about human rights, but they really don’t like it. The Chinese are honest. So in a way, what should one appreciate more? The honesty or the hypocritical stance of the Western companies? [The Chinese] don’t care about human rights and they’re honest about it. “We don’t care. We’re here to do our job. And we’re here to invest in the country.”

Filmmaker: But the basis of the China-Congo deal is that it will serve a mutual benefit. Do you foresee the possibility that the Congolese won’t benefit in the ways that they are promised?

Van Paesschen: For sure, they won’t benefit. And they know it already. Because it’s just history repeating itself. You have to ask yourself why the other companies didn’t start renovating the roads before the Chinese came in. That’s because the companies who have been there for a long time don’t trust the Congolese government. Many of the Congolese think that [the Chinese] will get fed up negotiating because the Congolese government always wants to review the contracts and renew the contracts. And the benefit of the contract goes to the higher-level persons in the Congo, not to the population. That’s what’s sad about it. Because they could benefit from it, even the way the deal is now. But they really won’t.

Filmmaker: There’s a point in the film where Lao Yang tells Eddy that he has no sense of his country’s history. Do you think that the Chinese have a sense of Congolese history?

Van Paesschen: Not at all. They’re interested in the Belgians–“How did you guys do it? Now it’s our turn–but I put that in the film to show [Lao Yang’s] arrogance. Because that’s the strange thing about Chinese people. Eddy always found it difficult: They’re always right. They’d never admit they were wrong. And they claim to know their own history of China. And they don’t understand that the Congolese don’t know their history too well.

Filmmaker: How do you think both parties would respond to the film?

Van Paesschen: I think the Congolese will find it quite hilarious actually. I don’t know about the Chinese. But my Chinese friend told me that they will be happy, especially Lao Yang because he’s depicted as a guy who wants to get things done. So he won’t feel ridiculed or anything like that. At least I hope so.

Filmmaker: Do you think that the Congo is in any place to progress as an independent nation, especially as more of its resources are exported to countries like China?

Van Paesschen: They still live in some kind of dictatorship. When I was there filming, there was this student uprising, but it was violently put to an end. They try and come to peace with that fact. And also, due to their history, they try to live from day to day. Their main concern is getting food on the table the next day for their families. It’s very complex. I don’t have these straight answers for you. That’s why I put it in the film. But it’s something that astounds me when I’m there also. In the film, when the radio DJ says, “If it’s not the Chinese, it’ll be someone else”, that’s something I picked up there. So I’m astounded by it also.