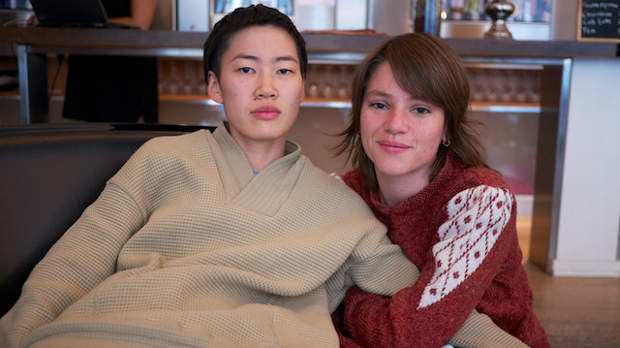 by Scott Macaulay
in Directing, Directors, Filmmaking, Interviews
on Sep 13, 2012

Easily the most out-there film I saw at last year’s CPH:DOX was one touted by the programmers as “the discovery of the festival”: Maiko Endo’s Kuichisan, receiving its New York debut tomorrow as part of the LaDiDa Festival. Previously, Endo was a vocalist in the band Battles and co-produced Jessica Oreck’s documentary Beetle Queen Conquers Tokyo. Now, Oreck has produced Endo’s debut picture, with Beetle Queen d.p. Sean Price Williams behind the camera. Stunningly shot in both black-and-white and color, Kuichisan is a tumbling collection of images, organized as much by feeling, sensation and the rhythms of its experimental soundtrack as by narrative logic. At first blush the film is an imagistic portrait of its location, Okinawa, the Japanese islands controlled by the United States until the early 1970s and still the site of U.S. military bases. Endo follows a 10-year-old boy as he wanders the streets, observing everything from BMXers to local rituals. But amidst these documentary moments are shards of narrative, including scenes with actress Eleonore Hendricks, and a sense of lost memories and inchoate emotion.

The densely constructed, fascinatingly mysterious Kuichisan, relying as it does on music, feeling and private meanings, is a tough movie to talk about, and that automatically makes it interesting in a film world in which so many films can be reduced to their log lines. I spoke about her process with Endo at CPH:DOX. The film screens in New York tomorrow at 9:00 PM and Sunday at 3:00 PM. The Sunday screening is preceded by Josh and Benny Safdie’s wonderful The Black Balloon.

Filmmaker: How long have you spent working on the film?

Endo: We shot it in 2009, in the summer, for five weeks. After that, I started to edit and it took me a year and 10 months. I finished editing in April.

Filmmaker: And tell me about your background. You’re a musician, right?

Endo: I’m just hanging out (laughs). Yeah, I play a violin. I learned how to play violin when I was four. I had a teacher in Japan, and I moved to New York when I was 19. I kept playing violin but I never really liked it; it was just something I could do. So I got my visa and everything through violin. [The violin-playing] is more like a tool to live – playing in an orchestra and that kind of stuff.

Filmmaker: What’s your connection to Okinawa?

Endo: Actually, I never had a connection with Okinawa. I was born in Finland. I went to Okinawa a year before we shot the film. I just went there and felt something instinctively. When I think about it, Okinawa is really its own kingdom between America and Japan. Myself, I grew up in Japan but I’ve been living in New York. For 11 years, I have been so much between New York and Tokyo – in-between (laughs). Maybe that’s why I choose that place because of that vibe of being in-between. 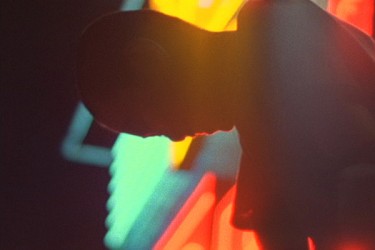 Filmmaker: The film very much has the quality of memory. It felt to me that it’s showing you scenes and people that are remembered. So, I’m interested in the fact that you had not actually traveled to Okinawa as a child. Does the film capture in any way your own feelings as a child, or is it more an exploration of a place and an expression of the feelings you felt while there?

Endo: I felt the air of the place itself and people – I felt something stuck in the gap between time and history. Time had stopped on its own. For me, I was so in-between that I couldn’t choose where to live – New York and Tokyo. So making this film, I was questioning myself: “Where’s my home?” And that had something to do with that place. Also I just wanted to play with people and release them from their time gap. I just wanted to work with them and release something (laughs).

Filmmaker: Are you talking about the audience now or the actors?

Filmmaker: Since you started as a musician, what then attracted you to film as an art form?

Endo: I always liked film. I went to movie theaters as a child. My aunt and uncle always took me to [double features of] B movies in Japan. I always wanted to make film so I went to New York. I wanted to learn how to make a film but I ended up not going to any school. I just hung out and around me were several musician friends so I naturally started to play music with them. But I always wanted to make a film but I couldn’t choose where to shoot. I didn’t feel right to make it in Tokyo or New York. Then I went to Okinawa.

Endo: Before making this film, I always loved to shoot and record sound – making a Super 8 film, or three-minute videos, so it grew from there. Also before making this film, in my image there was a painting that I liked that had in its one frame so many layers of time. You could see the time of these people making the one painting together. You could see the time of them hanging out making that one painting. When I saw it, I thought, “I wanna make films like this.”

Filmmaker: Was that a specific painting?

Endo: Yes, but I wouldn’t say which one (laughs).

Filmmaker: How did you wind up connecting with Jessica, Sean and the different people that worked on the film?

Endo: I helped with Jessica’s Beetle Queen Conquers Tokyo. I co-produced it. I knew Sean from Kim’s Video. I used to go there every single day. I met Jessica in Japan when she came to shoot. I started to help them and just became really good friends and me and Sean got along too. At some point, I was like, “Maybe I can make a film right now because I have Sean and Jessica – I have people I wanna work with so maybe let’s do it.”

Filmmaker: How did you get it financed?

Endo: I got a grant from Cinereach first before the shooting and the rest of it is pretty much personal – individual funding. I’m in debt right now (laughs). Cinereach gave me another grand for color-correcting and stuff. They helped me a lot.

Filmmaker: Tell me about the different characters in the film? Why the small boy?

Endo: Originally, the story was him and his younger sister. But I couldn’t find a good brother or sister so I decided to just to do it about him. It has something to do with when I was around that age.

Filmmaker: And where did Eleonore’s character come from?

Endo: I wanted an outsider – a kind of trickster, a joker (laughs). I didn’t have a specific idea of what her character would be but just the word trickster or joker or outsider was in mind.

Filmmaker: You said you met Sean at Kim’s Video and early on, you started watching a lot of B movies with your uncles. What kind of films do you like or what sort of film taste informed this? Did you have any film influences for this film or is entirely about coming up with your own language?

Endo: I watched any film like Sean (laughs). Before making this film, I had some films in my mind like Antonio das Mortes, by Glauber Rocha. And then Danny Lyon, his documentary film about three children [The Abandoned Children].

Filmmaker: Tell me how the music works in the film. It has this mixture of free improvisation as well as a musique concrete quality at times. How did the score come together and how do you see the music as functioning in the film? What does this music try to do in the film?

Endo: I made a film but maybe, at the same time, the whole film is a piece of music. I worked with – including myself – six people all together. I had two friends doing electronic music stuff and got temp music from each of them and I started to place them around. I had a specific idea that maybe this person will go well with this scene so I just [placed the cues] where they wanted to be. So I had all the music and the film was 2hrs and 45min – first cut. That was more quiet and no sound – just the music here and there. I cut it down to 76min or something and it was interesting, I felt I needed more music to glue it together. I felt I needed a lot of sound, but more like a subliminal score to it. One day I was working on the sound with my friend at the sound studio and we were like, “Maybe we should do a live recording – just watch the film and play along with it.” So I played violin and waterphone, which is like a weird spiral instrument you put water in and play with a bow. I played it and he was DJing and making sounds. We just jammed all the way through the movie while drinking beers one day in summer. After that, I took back the sound and working on chopping it and placing it and glued it all together.

Filmmaker: How do you feel about premiering the film here at CPH:DOX, which is a documentary festival? Do you think of your film as a documentary?

Endo: No (laughs). It’s just whatever.