RZA on The Man with the Iron Fists 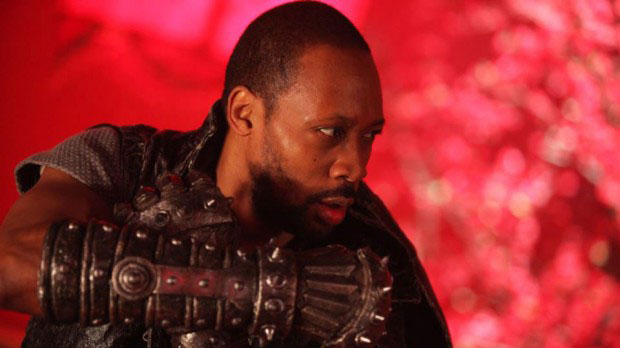 What do you get when you hand RZA the keys to his own film project? As fans of the multi-tasking Wu-Tang Clan leader will be thrilled to know, you get a balls-out, rap-infused martial arts spectacle, filled with the mad love of a lifelong kung fu fan. A project nine years in the making, RZA’s directorial debut, The Man with the Iron Fists, sees the 43-year-old artist star alongside Lucy Liu and Russell Crowe, bringing to life a mashed-up actioner that blends Chinese mysticism with the U.S. slave trade and more. The impetus for the film’s production came when RZA was scoring Kill Bill: Vol. 1, and witnessed firsthand the craft of Quentin Tarantino. The partnership led the composer to Eli Roth, who’d become his co-screenwriter, and instilled in him the kind of on-set practices that would help him make the leap from tireless MC to full-fledged filmmaker. Tarantino comparisons will surely abound, and one wonders if RZA could have thought better than to cast Lucy Liu and Gordon Liu in roles nearly xeroxed from the ones they played in the Kill Bill saga. But the diverting entertainment of Iron Fists feels pure, and the whole production, which is sweepingly, impressively realized, seems to have sprung straight from this musician-turned-maestro’s mind.

A refreshing, candid antidote to the PC Hollywood norm, RZA proves a guileless interview subject, sharing his passion for the work he created, his knowledge that he’s still “a student” in this business, and his love for Jim Jarmusch, the colleague who’s mentored him along with Tarantino, and who recently gave Iron Fists an auteur’s stamp of approval. According to RZA, his first behind-the-camera effort (which also sees him take the lead as the heroic and mysterious Blacksmith) is an easily misunderstood, complex onion of a film—one that moves fast and kicks ass.

Filmmaker: For me, a lot of sequences in The Man with the Iron Fists felt like the sword-clashing interludes of Wu-Tang albums come to life. Was that something you were trying to recreate visually?

RZA: Well, this film is definitely something that Wu-Tang fans will enjoy, and they’ll feel the visual sensation of what I’ve been trying to give to them on an audio level. But it’s much more layered than that, of course.

Filmmaker: The movie merges hip hop with kung fu, then there’s also a slavery element and even Russell Crowe lending a little gravitas. Were you ever concerned that all the pieces might not fit together?

RZA: No, I think the pieces fit perfectly. I think if you look back at the film, for a second or third viewing, you’ll see it fit together so much more in your head. This film was very well thought out. Recently I’ve been hearing some of the Hollywood critics, who are only seeing what’s on the surface, I think, which kind of surprised me. These film critics are supposed to be gifted people with in-depth thinking, but the funny thing is, they’ll only pay attention to one joke or one line rather than paying attention to why this makes sense or why that makes sense. What I was trying to do with the film was to create a fictitious place, called Jungle Village, where non-fiction is the backdrop. My idea was that this character [the Blacksmith] was a slave on a plantation, but he had a book on mathematics, he had a bible, he knows about chemistry. The idea was that he’s a pretty astute person. People like Eli Whitney and George Washington Carver were these brilliant men who were slaves, but also had a lot of knowledge. So the Blacksmith was reading and studying, and he was able to meld that with the [concept of] Chi and martial arts. That’s why he knew about mercury and magnets and sulfite and steel, and could incorporate the mental power to use blood to bring his weapons to life. I had a small budget. [laughs] A small budget with a big idea. But I put a lot of layers into the film, and I think it’s something that people can dissect. I also think it’s a cool film, and on the surface, it’s definitely a bunch of fun.

Filmmaker: It is! So, the ball started rolling with this project when you were doing the music for Kill Bill, and, naturally, there are going to be a lot of Kill Bill comparisons, but the movie feels like something you’ve wanted to make for a long time, even before the Kill Bill movies surfaced. When did the ideas for these characters first come to you?

RZA: The ideas for the characters have definitely been floating around in my imagination since I was a kid. Martial arts movies were my favorite. Every kid who watches movies pictures himself as his hero—he wants to be Superman, he wants to be Luke Skywalker. I’d watch kung fu movies and I’d always put myself in them, practicing marital arts. So that’s the foundation of it, from when I was a kid. But Quentin [Tarantino] is the mentor and the man who took my mind from a producer’s mind or a musical mind and shifted it to a filmmaking mind. He’s more meticulous with his dialogue and all of that—I’m still a student of his. The idea was in me, but it did take me being around him to be able to bring the idea into reality. To be able to dig deep into the imagination and make it into a concrete product.

Filmmaker: What other directors, besides Tarantino, were influential for you?

RZA: Well Jim Jarmusch was an early influence for me. We’ve worked together and he taught me a lot about filmmaking. Also John Woo, Ridley Scott. All these guys have influenced me. RZA on the set of The Man with the Iron Fists

Filmmaker: Yeah, we’ve seen you work with Jarmusch twice, in Coffee and Cigarettes and Ghost Dog, for which you also did the music. Any chance of another collaboration between you two?

RZA: I would love it. I would love it. Jim came to the premiere [of The Man with the Iron Fists] in New York, and I was so happy that he showed up. And he watched the film and he told me he dug it, man. He said that he’s gonna watch it multiple times, and that there are so many layers there. I was, like, “Aw, man.” I was so glad that he saw it and appreciated that there were multiple layers to it, visually and musically. Jim is one of my favorites. He’s the first guy that introduced me to the whole film world. I wouldn’t even be in this world if Jim Jarmusch didn’t seek me out—if he didn’t come to me and say, “I want you to score my movie.” I would love to work with him again. We’ve talked about a Ghost Dog 2, multiple times, but it just hasn’t gotten off the ground, you know?

RZA: Well, not exactly. There was one time when I worked on a TV show and it was kind of a weird situation. In the beginning, in hip hop, I was a nighttime guy, and when you work in Hollywood, it’s a daytime gig. People are working from 9 to 5, and I’m used to working until midnight. I ended up losing that job, actually. It was a matter of [my collaborator] worrying that I wouldn’t be able to deliver on time. But the [TV show’s] score was finished. I just created it at night. That’s how I work. With Jim [Jarmusch], the project let me work anywhere, at any time of night. But with Quentin, on Kill Bill, he made me sit in the editing room, for 90 days, all day, every day. After Kill Bill, I really had the process down, and then I did [the soundtracks for] Soul Plane and Blade: Trinity. It was just about making the transition from a nighttime musician to a daytime worker, and getting the pattern down. In working on these movies, I learned a lot about post-production. What I didn’t know about was preparation [laughs]. I didn’t know nothin’ about that, and how much of it would be required for directing. So, post-production I learned while working as a composer, principal photography I learned about when acting and watching Quentin on set, and preparation was the last step that I learned in becoming a director.

Filmmaker: What advice would you offer other musicians who are also trying to transition into filmmaking?

Filmmaker: There’s a great deal that went into the visuals of this movie—the sets, the costumes, the effects, the photography. How would you describe your vision for the film?

RZA: I wanted to create a whole world—almost like a Star Wars world, in a way. Our production designer, Drew Boughton, was really a great man for the job, in the sense that I saw somebody who was like-minded. And he happened to be a musician, a drummer. I’d never done any production design, but when I talked to him, I found that he was a really good set designer for me because everything I’d think of, he was able to see it. We had a lot of fun on the set, and we were very meticulous. We paid attention to how skin color would relate to other colors on screen, just a lot of detail. We spent weeks and weeks working on it.

Filmmaker: One of the reasons I felt The Man with the Iron Fists works is it really delivers what it promises. By which I mean, if you’re looking for an action-packed kung fu movie courtesy of the RZA, you’re going to get what you want and then some. On that note, what can you promise your fans next?

RZA: Haha. I think that whether it’s music or movies, there is an unpredictable quality I provide, and that will carry on through my films. [My work is] always going to have a certain look and spirit, but I also want it to have that unpredictable element. Like, for example, you don’t see the Black Widows [sexy prostitute killers] coming. Quentin does that. His films are unpredictable. You don’t know what the fuck’s going to happen. So I want to make sure that when you’re watching my films, you’re having a good time, but you’re still getting those unpredictable moments.