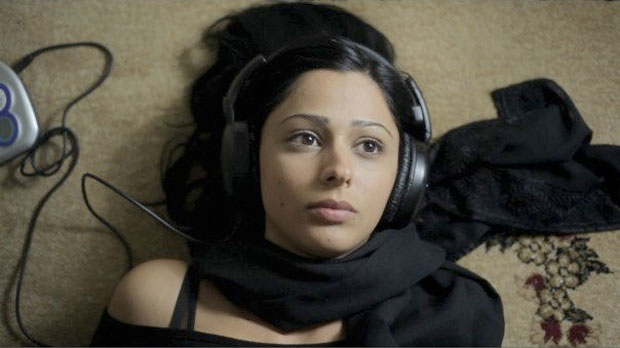 Nearly 10 years in the making, Habibi is the semi-autobiographical first feature from 2010 “25 New Face” Susan Youssef, a tale of forbidden love between two Palestinian students who find it impossible for their affection to overcome the rigid conventions of class in Palestinian life and Israel’s ironclad security regime. With Israelis and Palestinians again in actively violent conflict, the film couldn’t be more newsworthy, but Youssef’s low-budget aesthetic ingenuity (she couldn’t shoot in Gaza, but faked it admirably) and a remarkable performance from Maisa Abd Elhadi, as the young woman at the center of multiple circles of conflict (family vs. lover, tradition vs. modernity), should ultimately receive the bulk of attention.

As Layla, a university student whose academic career has been cut short after having her West Bank visa revoked by the Israeli authorities, Elhadi shows tremendous range and vulnerability as her character deals with her traditional but seemingly supportive family. However, after the tragic death of her brother’s best friend — killed by a stray bullet from an Israeli settler — her future plans grow more uncertain as her parents begin the process of marrying her off to an unappealing but well-to-do suitor and her brother grows increasingly militant. Meanwhile in a nearby refugee camp, Qays (Kais Nashif, who was so good a few years back in Paradise Now), a young poet whose burgeoning romance with Layla was curtailed when they were both sent home from school, pines for her through his poetry. He scrawls love poems upon the blank canvases of Gaza’s many winding alleys and backstreets, not immediately realizing the inherent danger of such work in this religiously sensitive area.

Brooklyn-born Youssef, who hails from a fairly traditional Syrian-Lebanese family that initially resisted her desire to pursue film, graduated from the University of Texas at Austin’s film program and then directed a series of acclaimed shorts that screened at both Sundance and MoMA. In order to make Habibi a reality, Youssef spent the better part of the 2000s scraping together resources from over a dozen granting institutions, such as The Jerome Foundation, Cinereach, NYSCA and the Princess Grace Awards. The picture bowed in Toronto and Venice last year before winning a host of accolades in Dubai, including Best Film, Editor, Performance (for Elhadi) and the FIPRESCI prize. It opens today at the reRun Theatre in Brooklyn. Filmmaker: You’re not Palestinian and were born in the United States, yet this film feels incredibly personal. Where did it come from? Obviously you’ve spent a significant amount of time in the Palestinian territories, yes?

Youssef: Even though the film is very different than my life — given that I was born in Brooklyn, New York, I’m not Palestinian, I’m Lebanese-American, I was able to complete my education — at the same time it is very similar to my life. The foundation for the story came from me falling in love with a theatre director from the Gaza Strip. I was around the same age as Layla in the film, I was in grad school, in my early 20s and I went there to make a student film. I fell in love with this theatre director who took me on to help me with my doc. We fell in love in a situation where we could not really be as involved as we wanted, so it made the story very easy for me to imagine. I also come from a very traditional family, who were firmly set about helping me decide who I was going to marry. It also became very difficult to finish my school; [my family was] not supportive of me pursuing my graduate degree in film. I was pretty much on my own in that area in order to pursue my film career, so I really know what it’s like to go outside my family’s wishes and take risks with my future. I knew what it was like to sacrifice all that for creative freedom. In that specific case, I knew what it was like to not want to become a doctor’s wife, not wanting to live the life my parents had set out for me, but to live the life I thought a free woman could have. I had some kind of emotional investment in her freedom. I was very young when I started writing it and it was very close by to me, the idea of not being able to realize for yourself who you want to be and almost not getting the chance.

Filmmaker: It took you quite some time to put together the mix of crowdfunding and grants to make the movie a reality.

Youssef: [sighs] Yeah, there are two things it’s really important for a filmmaker to know. I was crowdfunding before crowdfunding was really a trend. The basis of the film starts in 2002 when I was shooting that documentary in Gaza, I decided with Muhammad, the theater director, to make this feature. I had just seen the play version of Majnun Layla performed by two middle schoolers; both Qays and Layla were played by boys. I told him afterward that I wanted to make this feature about this story of two lovers and he supported the idea. I struggled with the documentary to get financing because the University of Texas at Austin, where I was studying, asked me to withdraw while I was shooting the documentary because they considered the work I was doing too dangerous. So because I couldn’t be student at UT I couldn’t get access to their equipment anymore, so I wrote everyone an email asking for whatever donations they could give me on PayPal. I got the confidence of people I knew and people I didn’t know based solely on the material. It was really important for Habibi to already have a large group of people who were invested in my work. I think because of that, I was even more invested in my own work than I would have been otherwise. It took me nearly ten years to complete the film and maybe I would have stopped if not for this crowd sourcing thing.

I never thought the entire film would be crowdfunded and I never though I’d piece it together from 12 sources or something like that. I had this idea in film school that it would be much different. I watched this interview on the Rushmore disc with Wes Anderson, who went to UT himself, and he talked about how he went to Sundance with Bottle Rocket and found this financier for his next feature and I really thought that’s how it would work for me. I was thinking, “I’m crowdfunding this documentary now, but the next one I’ll get the money.” I had a short at Sundance in 2006 and I already had a bunch of test footage from Gaza; I already had something to show. I thought it was perfect timing. I went to Sundance, and it just didn’t happen for me. It didn’t happen for a lot of reasons, one of which is the subject matter. It’s difficult to find support for Middle Eastern films in Arabic over here. Now it’s changing, but at the time it was very difficult. I didn’t get the kind of producers I thought the story deserved. There were a couple of interesting producers that wanted to come on, but they had certain demands of me that I was not willing to make.

Youssef: Well, one very prominent producer offered to help me if I made the film more erotic and less political. I felt that would not be true to the kind of film I was making. I wanted to make a film that would play well with Palestinian audiences. It didn’t fit my creative ideas of the film. I didn’t think it was that kind of movie. It just wasn’t the nature of the story. I ended up turning down offers like that. The producers that wanted to come on, we just couldn’t mesh ideas. So I ended up having to produce it myself and that’s when I went on this journey. You see 10 or 12 grants there, but I got one out of every 10 grant applications I wrote! That’s the ratio. I was constantly grant writing. There were many donations along the way outside of our Kickstarter campaign, sometimes because people just heard of the story and wanted to help me get it finished, but it was a very painful process. However, there are these creative advantages. I never had to compromise. I wasn’t, and am not, worried about making money from my movie. However, there are a number of risks you take in making a film this way. You don’t have pre-sales, for example. It gets much harder when the film is so low budget to get distributors to take the film on. So it has pluses and minuses, this way of making a movie. I will say that if I can finance a feature this way, any human being could do it.

Filmmaker: Were you able to shoot in Gaza?

Youssef: Well, there were two phases. There was the period from 2002 to 2005 where I was actually working on the Gaza Strip and I actually shot [there]; Maisa Aba Elhadi and I quite a bit of footage and then certain tragic things happened. The Israeli Defense Forces refused to grant me permission to return to the Gaza Strip. It became a very desperate journey to get back in. In 2009, right when my grants were going expire… The Jerome Foundation had a deadline for when you had to use that grant, so I had to decide, “How am I going to shoot this?” So we made this decision that we would break the siege in Gaza by telling the story anyway, but we’d have to fake it and begin from zero. So I had to scrap all the work I’d already done because it just didn’t look right. It was just heartbreaking to not be able to have a complete film shoot with the people in the Gaza Strip, who had worked very hard and for free, men and women of of all different religious and political backgrounds. I had no problem working in Gaza. Of course, the political regime has changed and its a different Gaza now.

When we moved to the West Bank, I had other issues. I had no Israeli financing for the film, so it was going to be very difficult to get permission for things, so I had to do everything under a tourist visa, I had to find locations, cast, hire crew and shoot all in less than three months. The West Bank looks really, really different than the Gaza Strip, so the way the film was shot was greatly affected. It’s very suffocating now. There’s almost no wide angles because we couldn’t have mountains in the background. There are certain stones and types of buildings that you’ll find in the West Bank that you won’t find in Gaza. The topography is so different and I didn’t want people to know offhand that we weren’t in Gaza. Then the issue with permits. People in the West Bank don’t have the permits to go to the sea in Yaffa or Tel Aviv, so we had to cast actors with Israeli IDs to be Qays and Layla so that we could shoot with them at the sea and at the West Bank. I’m very lucky we still had key members of our crew from Gaza who were working on our set. They really devoted themselves to the film and helped me create Gaza. Gazans have seen the film and told me how much it evokes for them the realities of living in Gaza. I’ll never get over not getting to shoot the rest there with everyone who worked so very hard, however, but in the end we did break the siege and were able to tell the story anyway.