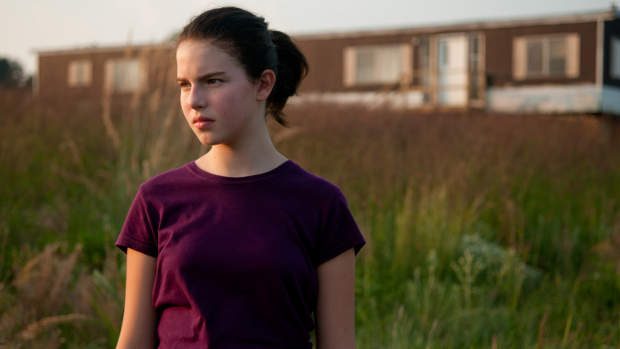 by Sarah Salovaara
in Directing, Directors, Filmmaking, Interviews
on Feb 21, 2013

Jenny Deller’s Future Weather takes an unusual look at Middle America, forgoing the clichés of its demography for ecology. Introverted Laudurée (Perla Haney-Jardine) is abandoned by her mother (Marin Ireland), who flees their trailer for Hollywood, with gelatinous aspirations for a career as a make-up artist. Fiercely independent, Laudurée carries out her daily life as though nothing happened, her days consumed by experiments and the threat of global warming. Yearning to be taken under the wing of her science teacher (Lili Taylor), Laudurée is nevertheless snatched up by her alcoholic grandmother (Amy Madigan), who plans to move to Florida to be with her boyfriend. Future Weather, an IFP Narrative Lab project from 2011, opens at reRun on March 1st, and below, Deller speaks to Filmmaker about the inception of the project and her characters’ catalysts.

Filmmaker: Future Weather drew its inspiration from a New Yorker article. What was it about this particular piece of writing that got your gears churning?

Deller: Fear of mass deaths. Extinction. The thought of losing our planet as we know it — losing things like snow and ice, losing our homes, losing incredible achievements of civilization. Katrina was a tragedy for New Orleans, but also a rebirth. What about Venice? How will it end up?

The New Yorker article was a two-part piece by Elizabeth Kolbert that painted a very stark picture of a warming climate. She traveled around the world talking to scientists from many different disciplines whose research was saying the same thing: if CO2 levels continue to rise at the current rate, we’re on a path to destruction. This was before An Inconvenient Truth came out, so the media wasn’t talking about global warming. [The] whole thing filled me with fear, despair, and rage.

Filmmaker: The film began as Save the Future, a 2009 short, in which Laudurée imagines her life as a PSA. Can you speak about the evolutionary process of the film over the course of those three years. What particular elements did you expound upon in the feature, and what — if anything — did you leave behind?

Deller: Future Weather actually began as a feature-length script in 2006, and Save the Future came along three years later through our participation in Film Independent’s Netflix FIND Your Voice Competition. Ten first-time directors with feature-length projects (among us [was] Dee Rees with Pariah, Maryam Keshavarz with Circumstance and Robby Pickering with Natural Selection), were charged with creating a three-minute short to represent their films in a 30-day online voting contest. The winner would get around a hundred grand to make their film. It was insane. But it pushed us to make a punchy, almost commercial short that distilled our main character and communicated the familial subtext to her environmental anxieties — definitely a reprieve from constantly revising the feature script and very different in style and tone from the film. It became a very handy showpiece that helped Kristin [Fairweather, one of the film’s producers] and I push the project to the next level of financing. And it gave me a chance to work with Perla Haney-Jardine, who stars in the feature. She and her family were incredibly generous in helping us get the Netflix short done — basically in their backyard in Asheville, NC.

Filmmaker: Central to Future Weather‘s narrative is the recognizable trope of the directionless mother and a driven daughter. Why did you choose to explore this relationship?

Deller: When I started writing the script, it seemed like everyone I knew was getting pregnant; celebrity babies were constantly in the media; high-end baby products were everywhere; it felt like there was a baby craze going on. And I was doubting whether I ever wanted to have children, which felt really taboo to do as a woman. At the very core of my exploration was the question: why do people have children? Is it a selfish or a selfless act? Is it ethical to bring a child into a world that may very quickly become fraught with climate disasters?

I wanted to depict opposites — a mother and daughter that have nothing, at least superficially, in common. But I wouldn’t call Tanya directionless, she’s a classic dreamer. She always has plans beyond her reach, and it’s forced her daughter to be the practical, grounded one in the relationship. I was interested in exploring the push and pull of being a mother – how do you balance caring for another life and your family with your own ambitions? Tanya is obviously way out of balance – she completely neglects her kid to pursue her wants, and doesn’t have the self-esteem to actually bring any of them to fruition. Her mother, Greta, on the other hand, is on the other end of the spectrum, and continually puts the needs of her family above her own, to the point of resentment. I wanted to show a kid grappling with these two poles, and trying to find her way.

Filmmaker: Where does Laudurée’s ecological obsession come from? Was it a means of aligning a personal crisis (being abandoned by one’s mother) with a universal one? How did you work with lead actor Perla Haney-Jarlene on crafting a source or story behind it?

Deller: The obsession grew organically from the character. I knew Laudurée was a kid who is fascinated by science and botany; it’s a way of ordering the chaos in her life. And her connection to nature came from not having the money for stuff and playing outside all the time. Because her mom’s never around and she’s isolated out in the country, she keeps company with the other living things around her — plants and animals. When I was confronted with the present danger of climate change, I immediately saw a connection to Laudurée and her situation — how easy it would be for her to displace her feelings about being abandoned onto this environmental abandonment issue — particularly for someone who’s had to develop such a tough exterior to get through life. Through that connection, I began to look at our relationship to the environment and our inability to deal with climate change as part of a cultural issue. Our civilization may be in the midst of its own coming-of-age drama. Hopefully there’s a happy ending.

Perla had a very intuitive sense of Laudurée’s position in the world after reading the script. She herself is also very interested in biology and immediately clicked into Laudurée’s concern for the environment. Perla had a very carefree childhood in North Carolina, running around, catching lizards, so it wasn’t hard for her to relate to that aspect of the character. We had a couple of phone calls, and we had the benefit of making the short together. The few months leading up to the shoot, I sent her Harriet the Spy and Mouchette as inspirational material. But ultimately, we didn’t have a lot time to work together beforehand. So I think the work of creating the bedrock for Laudurée’s obsession and attitude came on set. For better or worse, I talked to Perla a lot while we were working — before and during scenes — reminding her Laudurée’s point-of-view about things until it became second-nature to her. But I also gave her the space to explore on her own, develop relationships with the other actors, and to be herself. So much of Laudurée’s obsession comes out of the conflict or situation she’s in; it’s a response to what she’s going through emotionally, so I think Perla’s performance came naturally just from being present and responding to the other actors. She had an uncanny sense of Laudurée’s inner life. At one point she described Laudurée as being very different from her and kind of intimidating, but once she “put her on” it was actually fun to be her.

Filmmaker: Location and escapism play a key role in the film. Where did you shoot Future Weather and what was the scouting process like?

Deller: The film is set in southern Illinois where I grew up, but we shot it outside of Philadelphia where I was living when I wrote the script. Because the film is so much about environments and our relationship to them, the locations were critical to me, and I needed a landscape I could feel when I was writing. Because I knew early on that I would probably shoot this script where I was living, I began scouting as I was writing to make sure there were locations nearby that felt authentic and to feed my creative process. It was late spring, and I would go on these scouts just over the Delaware in southern Jersey and find these incredible locations that would spark scene ideas. While the towns were much more suburban and dense, the neighborhoods I was finding had this kinship to those in my hometown; there were a lot of abandoned buildings, and they would let the foliage along the sides of the roads get lush and overgrown which made it feel rural. These Jersey expeditions ended up presenting a few issues later on, because it turns out we had to shoot the film in Pennsylvania due to the tax incentive. In general, eastern PA is a lot more pruned and the built environment much older; but luckily we found a pocket north of the city that felt just right. The real challenge was finding the trailer location. Where I come from, there are plenty of trailer parks, but people will also plop a trailer down on a gorgeous piece of land and live there. I had it in my heart from the beginning that my characters lived that way; but finding a location already set up like that on the east coast was nearly impossible without taking the whole shoot on location. We eventually decided to find land closer to the city and put a trailer on it. It was the most Herzog-like moment of our production: hauling a dilapidated trailer over from New Jersey and getting it around this hairpin turn next to a giant ditch without tipping it over. At one point, the haulers were actually crawling underneath this hulking trailer with walkies coaching the driver across planks.