Tom Hanks on Producing vs. Acting: Producers Don’t Get a Free Haircut 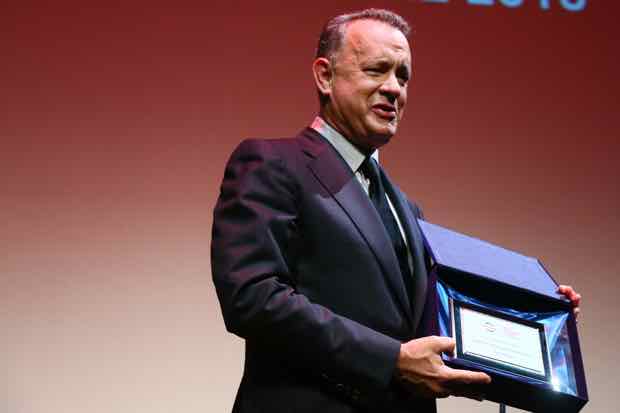 Tom Hanks is awarded with the Lifetime Achievement Award during the 11th Rome Film Fest. (Photo by Ernesto Ruscio/Getty Images)

Most people know Tom Hanks as a two-time Oscar winning actor. Some would recognize him as the sometimes-director behind works including That Thing You Do!, and others know him simply as his often-nickname “America’s Dad.” But the beloved actor may not be as well known as one of Hollywood’s top producers, with 50 producing credits to his name from Band of Brothers to My Big Fat Greek Wedding to Olive Kitteridge.

The actor, who recently picked up a lifetime achievement award at the Rome Film Fest, takes a hands-on role as producer in his own films and those of others, beyond just attaching his name to a project. He recently spoke in Rome about the differences between acting and producing.

Hanks confirmed that actors have it pretty good once they reach a certain level: “An actor gets a job and never has to explain anything to anyone. You don’t have to make phone calls, you don’t have to beg anybody, you don’t have to disappoint anybody; you can show up late, they bring you free sandwiches. You can get a haircut anytime you want to. You can say ‘I’m tired now, I think I’ll come to work at 9 a.m. and not at 6:45,’ and they have to put up with you,” said Hanks.

But Hanks described, despite the apparent joyless profession of producing, where he finds the joy. “What I get to do as a producer is ally myself to really good people who do what they do, who can budget a film, who can get the film made, who can do all the physical work that’s necessary, and be sort of, like, quality assurance on all the other artistic aspects of it,” he said.

He explained that also just being Tom Hanks doesn’t guarantee a picture getting made. One of his big regrets is trying to bring to the screen the story of leftist actor and musician Dean Reed, who settled in East Germany in the ‘70s. “I tried to make that movie for a long time and, quite frankly, I just got too old to see it through,” he said. “You come across these projects that you are passionate for and when they just slip out of your fingers like so much sand, it’s a bit of a bitter disappointment.”

“As an actor I know what to do,” he said, “but as a producer I stumble to find my way.” Another example, the film Cast Away, which Hanks originated and produced, took him seven years to bring the project to fruition. “When you have a great passion for something and it takes six or seven years in order to make it a reality,” he said, “the rewards can be pretty great.”