by Mary Anderson Casavant
in Issues, Reports
on Oct 21, 2011

This year the Independent Filmmaker Project, the nation’s oldest and largest advocacy program for independent filmmaking, moved it on up, transferring its signature event, Independent Film Week, uptown to the sparklingly new Elinor Bunin Munroe Film Center, home of the Film Society of Lincoln Center. In her introductory remarks, Amy Dotson, IFP’s deputy director, described the relocation as a “homecoming.” The IFP’s original Market began as a sidebar to the New York Film Festival at Lincoln Center, and both organizations were thrilled to be working in partnership again.

For the lucky producers, writers and directors whose projects had been selected to be a part of IFW’s Project Forum, the week was a flurry of meet and greets with production companies, distributors, financiers and other members of the industry — people who would help advise them on how to go from script to screen and festival to beyond. 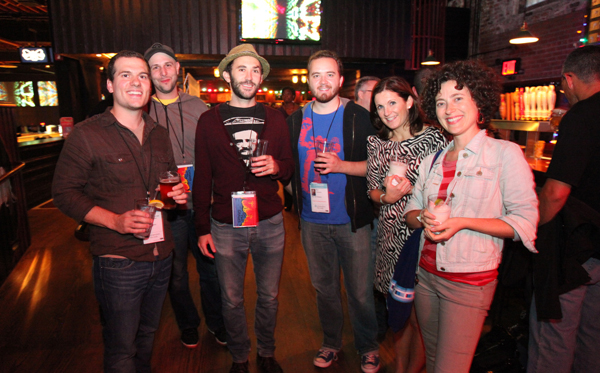 FELLOWS AT THE FILMMAKER AND INDUSTRY PARTY PHOTO BY KELSY CHAUVIN.

But IFW serves more than those lucky few — the five days of panel discussions are open to both IFP members and the public. This year, panelist after panelist dissected the state of the industry, encouraging the audience of aspiring filmmakers, producers and industry vets to consider the long arc of their career. As CAA agent Micah Green pointed out in his kick-off address, “You may want to work without regard to business, but if your goal is distribution, you’re going to need to recognize the market and do it in a remarkable way.”

In this war for eyeballs, branded filmmakers have a distinct advantage. Filmmaker and DIY marketing specialist Jon Reiss encouraged filmmakers “not to worry about the negative connotations of the word ‘brand.’ Tarantino is a brand… It means you have a vision and you’re going to keep connected to your viewers over the long term.” Producer Mike S. Ryan recounted how when he went out to pitch Meek’s Cutoff, a movie with “a difficult narrative,” he told investors what he thought was true, that “every single woman who listens to NPR will know this is required viewing.”

At a panel on “The Fine Art of Promoting Your Film,” filmmaker, former publicist and founder of the African-American Film Festival Releasing Movement, Ava DuVernay encouraged filmmakers to be honest with themselves: “Most filmmakers think their baby is the cutest baby…but you have to understand that the press is not required to cover your work…You need to ask yourself how to be realistic about where to go with it.”

The other big takeaway was that if you are really going to make a go of it in independent film, you’re going to need a lot of what John Wayne would have called “true grit.”

At a panel on crowdfunding, documentary filmmaker Jennifer Fox admitted that she “did not go willingly into crowdfunding” but had to because of a large investor default that left her facing bankruptcy. Not one to roll over and play dead, she hired some part-time employees, took to the Web and started a Kickstarter campaign for her film My Reincarnation that raised over $150,000. Among the things she gave away as an incentive? A piece of her own furniture.

Fox’s story had a happy ending — a major festival release followed by a deal with PBS. But what about those left in the cold when it comes to deal time? IFP executive director Joana Vicente told those without distribution to take heart: “Festivals used to be the end of the journey, but technology has changed.” Keri Putnam of the Sundance Institute announced that Sundance with its new Artists Services initiative is “actively trying to provide a platform for movies that are not getting traditional distribution offers.” Geoffrey Gilmore of Tribeca concurred, “In a way, I don’t care how you watch a film. You can watch it on a screen or an iPad…as long as it expands the definition of commercial work.”

And for those for whom a name-brand festival is a distant possibility but who still want to get their film out there? Sheri Candler, co-author of Selling Your Film Without Selling Your Soul, noted that the regional festival circuit is often an overlooked tool for those working on a micro-scale or with difficult material. After all, “You have to start a fire somewhere.”

Five days of being told how hard it is to be a working filmmaker can exhaust even the pluckiest of aspirants, but even in the darkest talk of shrinking opportunities, there was still a hint of the movie magic that got all of us into this mess in the first place. At the RBC Emerging Talent Reception, Filmmaker Magazine premiered its Spotlight on Filmmaker’s Taxi Cab Film Series, a series of short documentary profiles of IFP alumni whose films had not only gotten made but also gone on to have an impact.

As Knowlton spoke passionately about her subjects — a group of visually impaired people determined “not to be afraid of what they cannot see,” the panelists could barely contain their enthusiasm. It was a pitch so well-thought out and so clearly felt it brought at least one panelist (Chicken and Egg’s Judith Helfand) to tears. By the end of it, all three panelists, including Magnolia’s Dori Begley and the Gucci Tribeca Documentary Fund’s Ryan Harrington were practically begging to help Knowlton.

For the audience, it was a reminder that the so-called gatekeepers of grants and distribution aren’t so different from the pitchers — like them, they just want to be carried away by something they love. It also confirmed that sometimes hard work, enthusiasm and vision really can carry the day. Damn the torpedoes. Let’s make a movie!