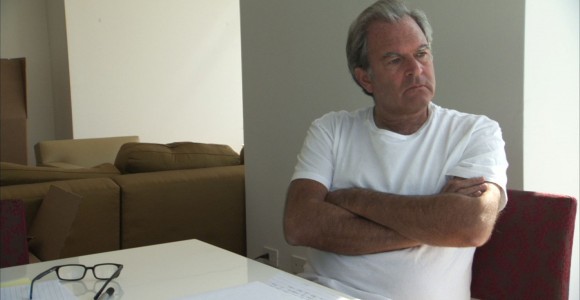 Putting a human face on the criminality of the financial crisis, Unraveled explores the downfall of Marc Dreier, a prominent Manhattan attorney who was arrested in 2009 for embezzling hundreds of millions of dollars from hedge funds. The documentary places us in the “guilded prison” of Dreier’s upper East Side apartment during his 60-day house arrest. In that time, he is interviewed by none other than one of his victims, Marc Simon, who, in addition to being an Oscar-nominated filmmaker, formerly worked as a lawyer at Dreier’s law firm, Dreier L.L.P.

You wouldn’t know that from the film, however, as Simon refrains from including his personal commentary. Unraveled derives the bulk of its narration from Dreier himself. After 30 years as an attorney, Dreier was by all standards (except his own) successful: he had apartments in Los Angeles and New York, art by Marc Rothko and Andy Warhol, and multiple offices throughout the country. As he said in his court statement, however, “I was desperate for some measure of the success that I felt had eluded me.” Through photographs, broadcast footage and 3D animation, Simon grants us temporary reprieve from the apartment whose luxuries eventually become suffocating. Neither accepting nor rejecting Dreier’s confessions, Simon locates Dreier in a maze of his own myths.

Filmmaker sat down with Marc Simon in Amsterdam, where Unraveled played in the “Best of Fests” section of International Documentary Film Festival Amsterdam (IDFA). We discussed the genesis of his project, its creative challenges, and the dilemmas of our criminal justice system. Filmmaker: Let’s start when you were working at Dreier L.L.P. and first found out about your boss’s arrest.

Simon: I can only say it was like a bomb went off. When we all heard that Marc Dreier was arrested in Toronto for criminal impersonation, we didn’t even know what that meant. Everyone was running, everyone was panicked, no one knew what was going on. But you knew that it wasn’t good. You just had a sense that this wasn’t going to be saved. It was done. Marc Dreier wasn’t who he said he was.

Filmmaker: What impact did the fraud have on you personally?

Simon: I was injured. The way the pay structure works [at Dreier L.L.P.] is that you’re entitled to a non-discretionary bonus based on the money you bring into the firm. And I had had a good couple years. But the year before [Marc was arrested] he asked me to defer it. So I was totally financially injured. [Fortunately] when you’re an attorney, your clients are your clients. So when the firm collapsed, I kept my filmmaker clients and then transferred to Cowan, DeBaets, Abrahams & Sheppard L.L.P., which is an entertainment firm in the city.

Filmmaker: When did the idea of making a film on Dreier occur to you?

Simon: Well, I’ll start by saying that I did not seek out this film — the film sort of sought me out. Stick Figure Productions is one of [CDAS’s] clients, and they approached me with the idea. But when this mythic collapse happened, I didn’t think, “Let me put my filmmaker hat on.” I was starting at a new firm, my film [Nursery University] was being released, and the idea of making another film about Marc Dreier wasn’t on the forefront of my mind. But a month or two later, it [occurred to] me that this was an opportunity that, as a storyteller, I had to at least see if I could do. I didn’t know if [Dreier] was going to want to do it. When he pled guilty, popular thought was that he wasn’t going to stay out under house arrest.  Everyone thought the judge was going to send him into prison. So there would’ve been no film. But the documentary gods shined down, as they often do and have to do. After he pled guilty and was granted extended bail under house arrest, I remember driving away from the courthouse with Bob Richman, the great DP, and saying, “Be careful what you wish for.” Because I knew that for the next two months, three days a week, I was going to be with Marc Dreier under house arrest. And I knew it would be emotionally and physically exhausting.

Filmmaker: Can you describe your first interaction with Dreier after all the facts of the crime were revealed?

Simon: It’s reminiscent of the man who when I walked into this surreal existence of house arrest and saw him for the first time greeted me as if nothing had happened: “Hey Marc, how are you? Come in.” The whole time he never once apologized for what he did to me or for letting me down. It was all very matter-of-fact and it was about the process we were both considering engaging in, i.e., making this movie.

Filmmaker: He showed no remorse towards you personally?

Simon: He showed no remorse. His view is that companies go under all the time, and people lose their jobs all the time. He felt like he was a good boss for a long period of time, he was very loyal, and that when this happened to him very few people were there for him.

Filmmaker: Did any part of you feel like he was exploiting you again?

Simon: I didn’t. To the contrary, I looked at this as an opportunity. While I was an attorney at his firm, Marc was a loyal and supportive boss, someone who was in some sense a mentor. But he is representative of this entire culture of corporate greed. He is representative of all these people that we read about in the newspapers and say to ourselves, “What the hell was this guy thinking?” So the opportunity to have known one of these people personally, and to be able to sit there and try—try—to excavate all of the reasonings was fascinating to me. Both professionally and personally. And then to be able to transform this tragedy into something positive, something positive meaning art, and also positive meaning something I do view as a cautionary tale, was fascinating.

Filmmaker: How did you prepare yourself for your conversations?

Simon: Every time I was going there I tried to mine the core of how someone who was so successful could cross this line. [Marc went to] Harvard, Yale, was voted Class President, voted Most Likely to Succeed, was someone who people thought was successful, who was successful. What is it in his personality that [convinced him that] none of this was enough? What was the insecurity that led to that? What was the need? If you’re a narrative filmmaker you have to get to the character’s need. And Bob [Richman] and I were always talking about the fact that we might not ever find it, because Mark Dreier may not be aware of what it really is, and he may not be able to reveal it. But if we over this two month period engaged in this respectful, persistent push, that’s what would make a well-rounded character. And that was the goal.

Filmmaker: How did the constraints of focusing on one subject in one location affect your creative process?

Simon: From an editing point of view, this was by far the hardest of my three films to make. Before I made After Innocence, I wrote a treatment that mirrored the structure of the film. We were going to follow five exonerated people, one of whom was trying to get out of prison, and that would [provide] the narrative arc. In Nursery University, I followed five families, and the narrative arc would cover the beginning of the nursery process to the end. I knew this film was going to be very difficult, because we had one guy. I wasn’t going to have a “talking head” piece with people to cut to, and I knew that we had to have some recreative element on a very low budget. And I wasn’t going to do Man on Wire recreations.

Filmmaker: So how did the idea of animation come about?

Simon: I did not have the graphic art element in my mind when we were shooting. That manifested itself because I thought about every option I had. Some of it was jokes—I could do clamation!—or I could cut to nothing and just have Marc talking the whole time. Eventually this decision was reached because the graphic art element represented two things to me: 1) It represented fiction, and Dreier’s whole life is fiction; and 2) he saw himself in this elevated light, so I wanted what I called a “heightened reality”.

Filmmaker: Do you think Dreier has a misplaced perception of himself?

Simon: The way you phrased that is interesting, because the question is, “Does he have a misplaced perception of himself?” Or is he just in denial, or is he aware of that misplaced perception and is just trying to fool others and/or himself? Because there is no doubt that there is a misplaced perception. [In order] to commit a crime like this, there has to be personality aspects that are misplaced—socio-pathology, narcissism, denial—that’s all part of it. And it fascinates me still. I mean, I made the film, I interviewed him, I edited it, and I still can’t totally put my finger on it. And that’s what makes it fascinating. He’s a human person. It’s not black and white. There are greys. And I think that at the end of the day that’s what’s fascinating. There’s not one answer that you can pinpoint.

Filmmaker: For the sake of conversation, however, how would you attempt to explain Dreier’s downfall?

Simon: Well, if someone says, “He did this because he was greedy,” that totally simplifies it and that’s not accurate. In fact, he did not commit these crimes because he was greedy. He committed these crimes because he wanted to be what I call “the big man.” In The Natural, there was this line that Robert Redford recites: “I want to walk down the street and people go, ‘There goes Roy Hobbs, the best there ever was.'” And it’s like that mindset: Dreier wanted to walk down the street, he wanted to be at New York events, and he wanted people to say, “There’s Mark Dreier. He’s that big shot attorney.” That’s what drove him to do this. It wasn’t the house, it wasn’t the yacht. Those things were just the costume around him, the facade.

Filmmaker: There is a point in the film where Dreier is trying to convince his lawyers—and the audience—that his crime was not as egregious as Bernie Madoff’s, so he therefore should not be sentenced accordingly.  What is your take on his final sentencing?

Simon: That’s the element of suspense in the film: at the end of this countdown, what is he going to be sentenced to? My sense of it is it was approximately appropriate. It had to be a harsh sentence because of the gravity of the crime. When you steal $750 million, that is a serious, serious crime, and you need to be punished for it. And it can’t be a slap on the wrist, it has to have a deterrent effect. But at the same time, I did not think that it should be a life sentence. Because in society, where is that line? If you’re mugged and someone holds a gun to your head that’s loaded, and has the ability to kill you, and he steals a hundred dollars, is that crime worse than someone who steals $750 million but doesn’t put anyone in physical harm’s way? These are not easy answers. But that’s part of our society, that’s part of our criminal justice system, and that’s part what we need to figure out. I will tell you that if you walk out of an ATM and someone puts a gun to your head, and shows you the bullets of a chamber and steals $100 from you, that is equal if not worse to what Dreier did, I think.