Not (Really) a List: Recapping 2019 As Seen from the Pages of Filmmaker 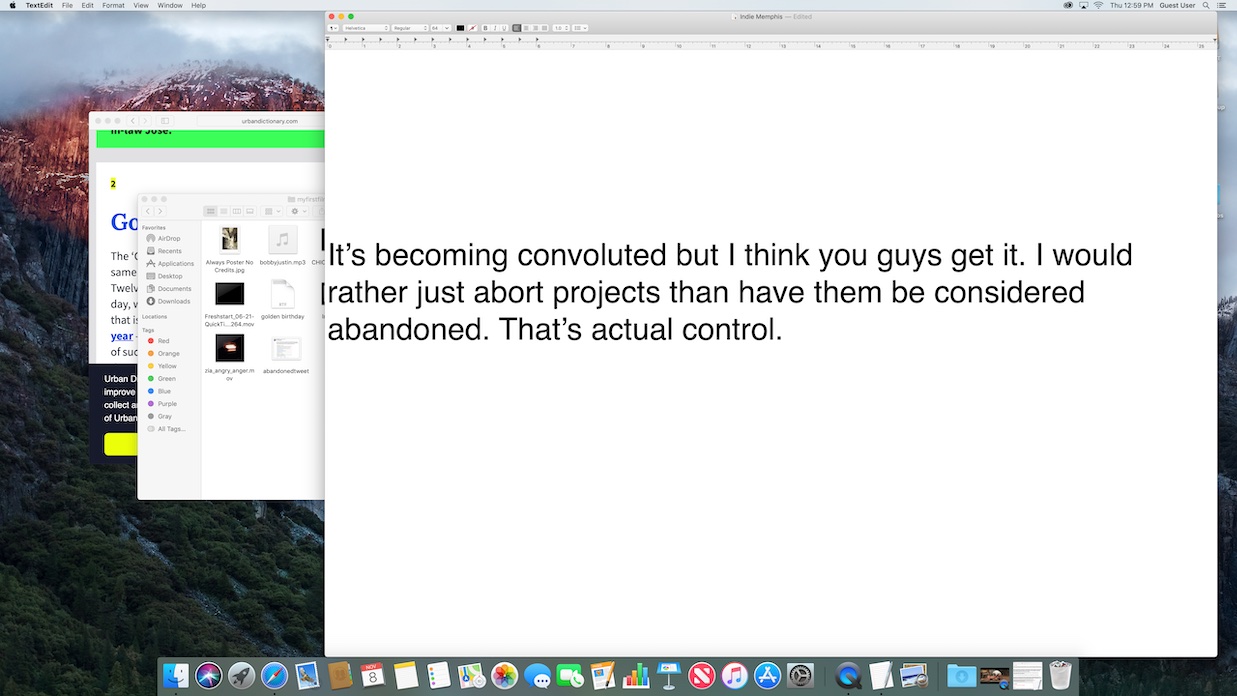 2019 will soon be the past, but once it was the future — a subject explored by Joanne McNeil in her Filmmaker print and online column, Speculations. She revisited films (The Running Man, Akira, Blade Runner) specifically set in 2019, assessing not just the accuracy of their future-dreaming but also the fantasies of progress their own eras entertained. McNeil listed various aspects of the present, including policy denial around climate change, that the films missed. But considering the last quarter century, who could have predicted that filmmaking — and film culture — would have landed where it is? While there’s a “same as it ever was” quality to the energies of young filmmakers cobbling it together to make first films, the distribution and viewership worlds they have been launched into is radically different. Anthony Kaufman got at some of the reasons for this change this year in his Industry Beat column, Digital Haves and Have Nots., which pinpointed the diminishing of distributor SVOD output deals as one factor influencing what you are watching not just streaming but in theaters. And although we will have in the next few days a few “ten best” lists on the site, their relative paucity is perhaps due to my recognition of one of the other major business shifts of the decade, which is the role of what Shoshana Zuboff dubs “surveillance capitalism” when it comes to the arena of critical production and cultural consumption. As Elena Gorfinkel put it in her brilliant “Against Lists,” “But in this hyper-mediated moment, the recirculated compulsory form of the list – list as desiderata of consumption, a grocery receipt of your watching – has become an instrument of commodity fetishism, of algorithmic capture, of priapic, indulgent self-exposure.”

So, in lieu of a list, I’m going to close out the year by collecting not 2019’s “best” or most highly-trafficked pieces (although there are several of those here), but just a few of the ones that spoke most directly to our identity as a publication. And, okay, I guess this is a list, but hopefully one guided less by algorithm and data and more by intuition and whimsy.

A couple of years ago we moved all of our festival coverage online, opening up space in the print issue for our Reflections section. This year we continued to try and cover the festival world through critic’s notebooks from Vadim Rizov and others, as well as finding off-angle ways of writing about debuting films and the festival experience. Meredith Alloway spoke to Sundance filmmakers on how they made their first features.  Our annual Sundance question this year was “what part of your film are you most secretly proud of.”  My favorite reply was from The Souvenir director Joanna Hogg, who found the question vexing:

(Speaking of Hogg, Vadim Rizov interviewed Hogg about film school, where her The Souvenir flashes back from.)

Our Sundance 2019 coverage also included our usual swatch of interviews, questions and reviews, but affectingly atypical was this “love letter to Park City” from Holden Osborne on confronting the darkness while at the festival. This year was Slamdance’s 25th anniversary, and co-founder Paul Rachman compared the festival’s trajectory to Stanley Kubrick’s filmmaking career. Later in the year, Blake Williams contributed his unrivaled Cannes coverage. From Venice, Doug Dillaman wrote about the media art on display at the Venice Biennale. And, in conjunction with a Cinekink award, Lauren Wissot interviewed Jennifer Lyon Bell about making feminist pornography amidst social media platform shutdowns.

Speaking of confronting the lonelier, darker aspects of the filmmaking experience, such ruminations were a throughline in 2019. In addition to Osborne’s piece Joel Potrykus offered an at-moments painful account of dealing with the crippling anxiety around the production process in one of the best first-person pieces we ran this year, “Fear and Loathing in Grand Rapids,” Filmmaker Sophy Romvari tackled the subject of mental health as it relates to filmmaking by writing about the choice of where to live. We ran a conversation with Jillian Mayer and Zia Anger around the concepts of filmmaking success and failure, topics very artfully essayed in Anger’s My First Film, which is easily one of the ten best works I saw in 2019. (This link is a bit of a cheat, I realize, as this piece was published in the Winter 2018 edition but made its online debut in 2019, when the performance received its wider run.) And, closing out the year, director A.D. Calvo wrote about the loneliness that can come with the struggle of making film after film in the independent arena. And while it’s not an essay, there’s a deeper-than-usual examination of one filmmaker’s practice as relates to his life and ideologies in Michael Tully’s interview with The Mountain‘s Rick Alverson.

In other pieces, writers got at the personal through their own reflections on specific films. Epic was writer, director and actor Evan Louison’s very personal five-part journey through the films of Abel Ferrara, coinciding with Ferrara’s MoMA retrospective. And Brandon Tonner-Connolly wrote about his own personal reaction to Andrzej Żuławski’s Possession and his encounter with its screenwriter, Frederic Tuten — a wonderful piece that got at the different ways people who work on films can react to viewing them. And in “Seamless Transitions”: Remembering Stanley Donen,” producer and executive Ben Odell eulogized the great director of Charade and Singin’ in the Rain by recalling his own early days as a producer trying to make with Donen an independent film.

Informative how-to pieces written by people with chops are the backbone of Filmmaker, and at 27 years of publication we keep trying to find new ways to convey this info. We launched this year Aaron Hunt’s Plus One, that offers a different way to learn about below-the-line crew positions. Hunt goes to the movies with a crew member seeing a film they worked on for the first time. For example, here he teaches us about the role of the props department, and the sometimes confusing divisions between it and the art and wardrobe divisions by going to see Uncut Gems with on-set props Deneice O’Connor. In “On Decks,” by Meredith Alloway (with case studies by myself), I was finally able to realize a piece that’s been on the runlist for years — one on the importance of film lookbooks. What held it up? Image rights. (Most film lookbooks use appropriated reference photos not licensed for publication. We got around that by licensing specific photos for the print edition and by relying on lookbooks using original photography.) And I person I’ve been trying to get into this publication for years I finally snagged: editor Michael Taylor (The Farewell, The Mountain), who, in The Art of Listening, wrote about how music and being attuned to the rhythms of the dailies informs his process. Cinematographer Carson Lund wrote about shooting Ham on Rye with 100 cast members and no permits in Los Angeles. And in our special summer section on television, Matt Mulcahey talked in “Screen Overload” with three DPs hailing from the feature world — M. David Mullen, Christian Sprenger and Ashley Connor — on the craft of shooting television. Also dealing with cinematography: In “Lens Flair,” Aaron Hunt learned about the new specialty lens manufacturer TRIBE7 by talking with two of the company’s founders, DP  Bradford Young and exec Neil Fanthom TRIBE7. One yearly favorite made its reappearance:  Vadim Rizov’s latest look at 35mm production in which he discussed all the films that shot on that format in 2018.

With so many filmmakers from our 25 New Faces list making superhero movies (Ryan Coogler, Anna Boden and Ryan Fleck, Patty Jenkins among them), it’s only natural that the MCU would make some kind of appearance in our pages this year. In another piece from Mulcahey as part of his Shutter Angles column, he spoke Captain Marvel colorist Doug Delaney about the visuals of the MCU. When it comes to another kind of spectacle film, our coverage of James Gray’s Ad Astra was kind of a Trojan horse piece as Leo Goldsmith and Gregory Zinman talked about serving as experimental film consultants for Gray.

In the summer each year we write about film schools, and particularly noteworthy from the 2019 edition was director Stephen Cone on learning to teach screen acting. And Holly Willis, who pens our regular film school column, talked to filmmakers who remembered the lessons of iconic instructors like Shirley Clarke and Lynn Hershman Leeson. Discussing another kind of education was Purpose2Play Editor Kim Constantinesco, who conveyed her experience enrolling in stunt school at the age of 33.

2019 was the year in which we started getting more of our old, print-only pieces online, like this interview I did with Spike Jonze and Charlie Kaufman about Being John Malkovitch.

Odds and ends: Vadim Rizov talked with the filmmakers behind The Plagiarists, one of his year’s ten-bests and undeniably a picture with its finger on the pulse of the current cultural moment. Another of Rizov’s interviews led to this filmmaker — whose work I don’t know — being bookmarked: Ryūsuke Hamaguchi’s Asako I & II. Wong Kar-wai revisited the making of Chungking Express at the Hawaii International Film Festival, via Jason Sanders. And Hu Bo passed away before his nearly-four hour An Elephant Sitting Still opened in America, but Aaron Hunt spoke with cinematographer Fan Chao while Daniel Eagan reported from a panel he sat on with cinematographers Ed Lachman and Phillippe Rousselot extolling the film at Cameraimage.

Finally, our end-of-year conversation-starter is Abby Sun’s “Self Reflection in Theater Two,” which is generating debate at the moment around the ways in which film festivals address issues around representation, diversity and power.